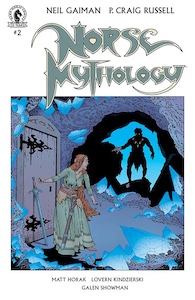 Norse Mythology II #6 offers a thoughtful reminder that every life has value and the message could end there. Instead, this issue brings the story of the Immortal Apples to a close and begins the tale of Gerd and Frey.

Readers might need to reference last month’s issue to remember Thiazi. In short, he’s the giant who took the form of a giant bird and tricked Loki into tricking the keeper of the Immortal Apples into becoming the prisoner of Thiazi. It’s a winding twisting story that bears all the markings of Thor’s brother.
It’s just another reason why most of the Aesir and the Vanir have a problem with Loki. When The Trickster God was forced to reveal his treachery he was roundly punished by and then he became the bait for a trap.
The trap worked well and the result was Thiazi’s death. Now, Skadi, his daughter seeks compensation for her loss. Every life has a price. The price for Loki’s actions has grown, and the Aesir must square the balance. 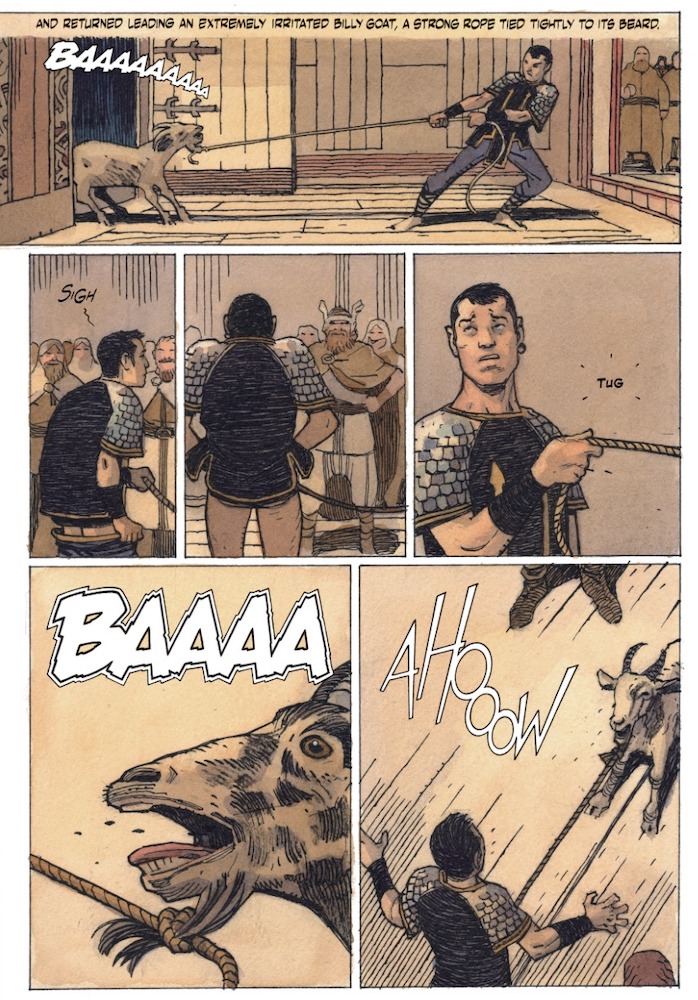 So, Odin makes Skadi three promises. She will receive a husband to replace the father she lost and marry the groom of her choosing. It’s unclear how this is an equal bargain, but Skadi does not reject the offer. She will laugh again.

It seems unlikely upon her arrival but that’s where an appropriate punishment is useful. Finally, her father, Thiazi, will not be forgotten.
The first solution came with a game. Skadi had to choose the best-looking feet. She thought they belonged to Balder. Instead, they were the feet of Njord, the father of Freya and her brother Frey. Skadi and Njord are married that same day and the first promise is fulfilled. 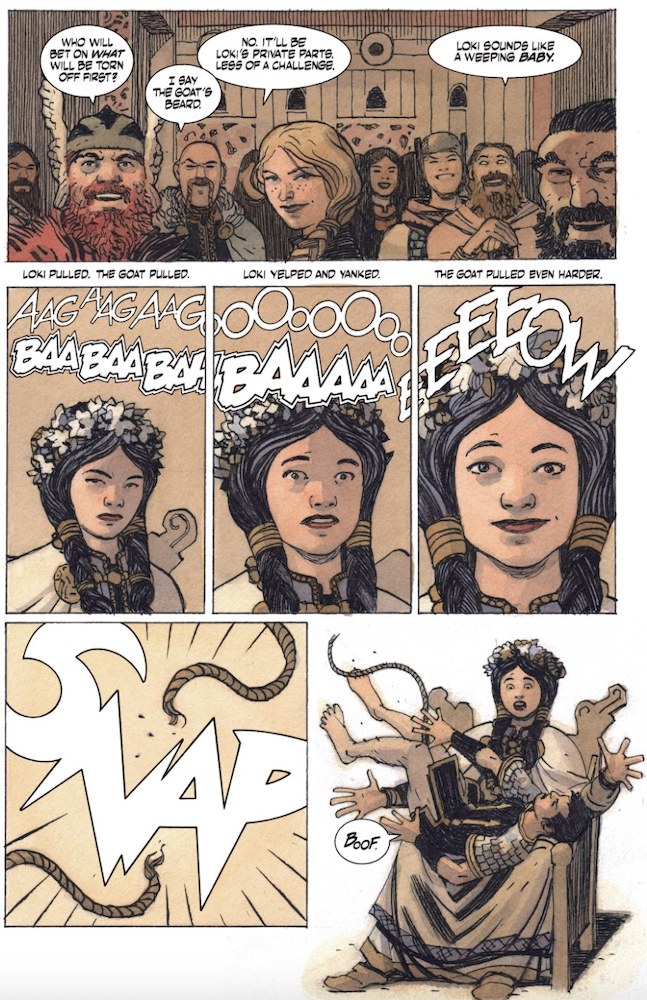 Loki and a goat were the entertainment. Loki’s garments were lowered, a rope was tied in two places and a tug of war began. The goat grunted, Loki howled, and this reviewer and Thiazi’s daughter joined the crowd in roars of laughter.
Finally, Odin brought Skadi outside and showed her Thiazi’s eyes. The eyes rose into the sky and became stars. And Odin’s promise that Thiazi would not be forgotten came true.

Frey is the brother of Freya, Odin’s wife. Frey was already the mightiest of the Vanir. He was responsible for agricultural bounty, he lived in a home built by the light elves, and he had a sword that could fight for him. But wait, there’s more. Frey also had a boar with golden bristles who pulled his chariot and a ship that could fit in his bag. And, like many who have it all, he was missing something vital.
When Frey sneaks away to Odin’s observation point — Hlidskjalf — he sits upon a mighty throne and searches every corner of existence. Then he sees a woman that he cannot live without. He proves this by not eating or drinking for three days straight. 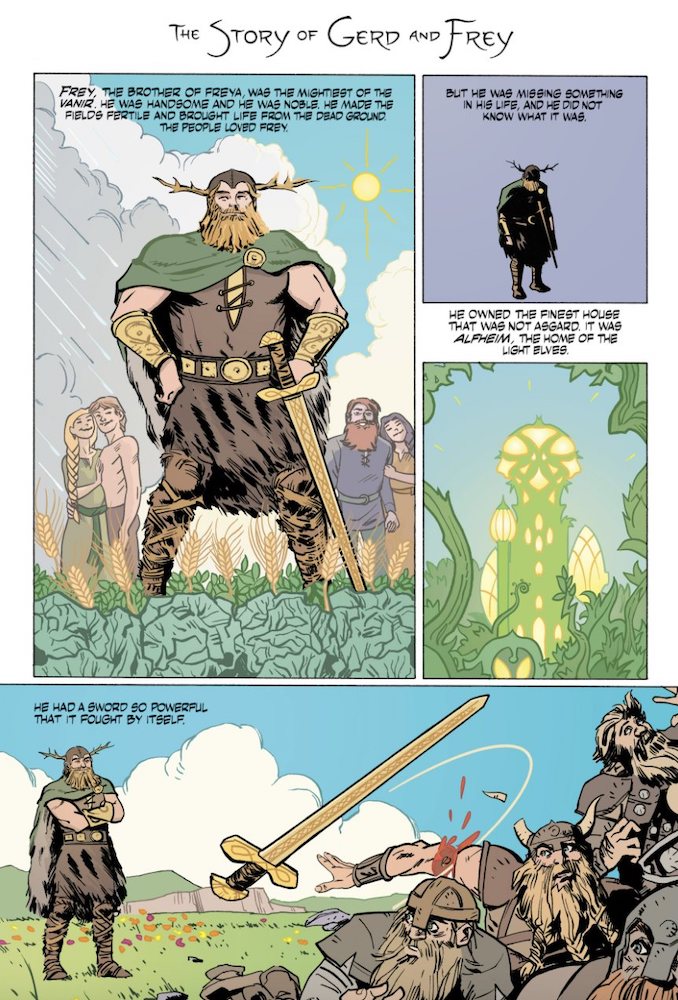 When his chief servant inquires what troubles his master, Frey shares that he has seen the woman of his dreams and he cannot be at peace until she is his. He promises anything to his servant if the two can be wed. The servant asks for the sword that fights on its own.

Frey agrees and a match is made. After that things progress rather smoothly. The two are married and spend their days in wedded bliss. However, there is an ominous warning. What Frey does not miss now will be the very thing he needs when all is on the line. 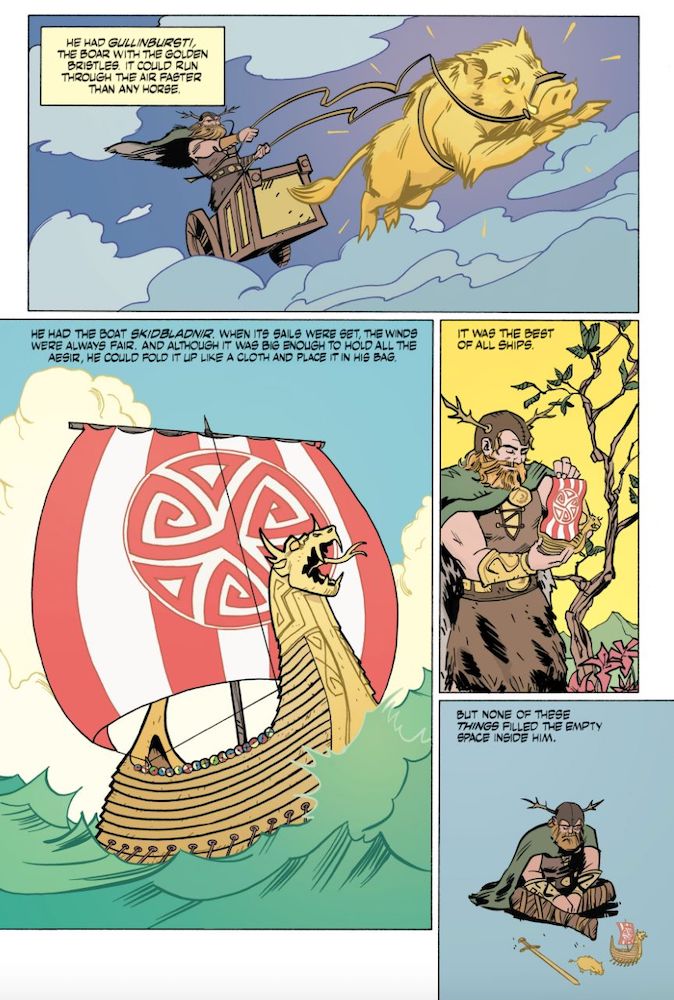 Neil Gaiman writes heartache, love, laughter, and hope with the ease of a genius. Years of storytelling have honed his craft. When a master unlocks the secret magic within the legends of great stories that have endured for millennia it feels transcendent. The delight and joy of each tale is a sunrise at midnight.

Gabriel Hernandez Walta and Sandy Jarrell invoke Gaiman’s vision into their inspired art. It creates a seamless bond between two distinctive stories to create a shared landscape. P. Craig Russell shapes the direction and flow of every panel and Galen Showman’s letters etch the sound of each voice in the reader’s ears.