Holy digital comics, Batman! The adventures of the 1960’s television show continue in this week’s installment of Batman ’66. Check out the latest DCN review! 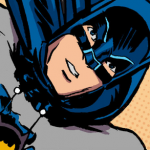 When naming the greatest Batman villains, most contemporary fans would include Joker, Riddler, Bane, etc.  However, one response often delivered by fans from the Baby Boomer generation is Vincent Price’s Egghead, who makes his Batman ’66 debut in issue #9.  Jeff Parker once more invites the readers into the crazy world of camp.  Joining him is up and coming artist Sandy Jarrell. 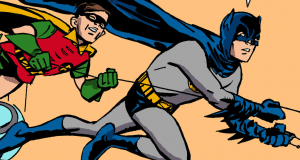 Once more, Jeff Parker is able to deliver a solid and satisfying script.  Though Egghead was never a villain I found particularly interesting, Parker is able to hold my attention by keeping the focus on the Dynamic Duo and utilizing smart, self-referential dialogue. Also, by keeping Egghead in the background, he is able to make the best use of the character’s trademark puns without overusing them. After all, the use of the term “eggcellent” has a limited shelf life. 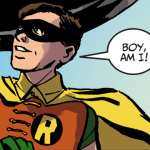 Sandy Jarrell’s artwork is very stylized and reminds me an awful lot of Jeff Lemire’s work.  It is bound to have a divisive reaction from those that decide to take a look at this issue.  I happen to enjoy this style of artwork (see my review of Adventures of Superman #2 for proof) as it adds a sense of childlike wonder to the title. I particularly found the mid-air acrobatics of Batman and Robin to be very well rendered.

The story itself is fairly basic.  If you’re looking for a groundbreaking tale of superheroism, you might want to look elsewhere.  It isn’t a bad story, but its simplicity may turn off some readers.  Also, as previously mentioned, Jarrell’s artwork will undoubtedly alienate some readers.

Batman ’66 #9 is a solid, if unspectacular addition to the adventures of Adam West and Burt Ward.  With some pretty cool visuals and sharp dialogue, this issue is a “meat and potatoes” superhero story.  However, one can’t help but wonder “whatever happened to DC2?” Luckily, the format returns next issue! 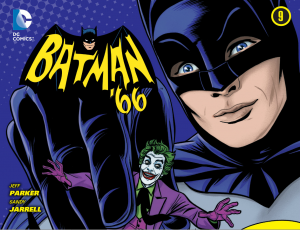 The Crime Syndicate Is Going Collectable