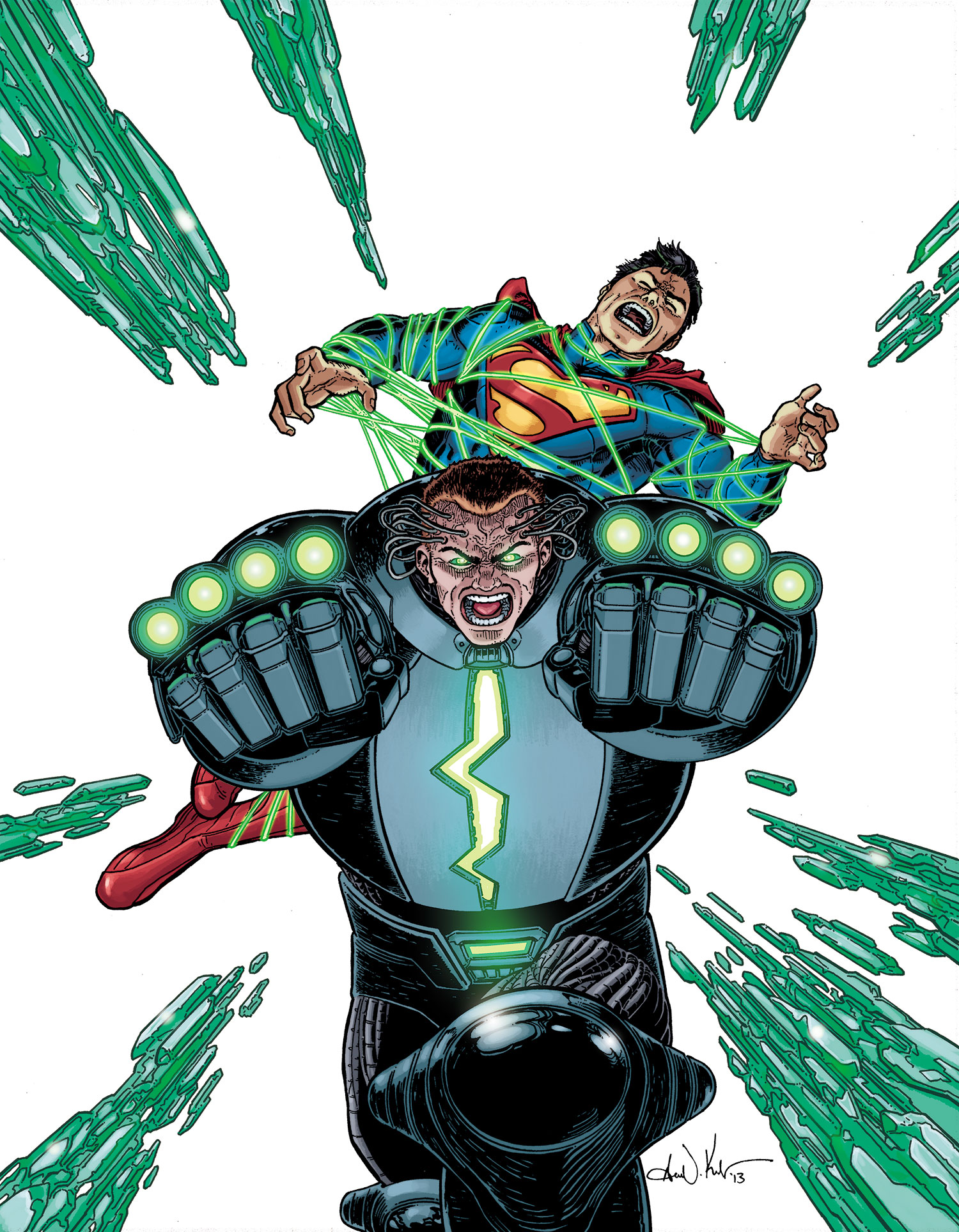 It’s the end of Villain’s Month, and with the end, comes the continuation of John Corben’s, or rather, Metallo’s story. Last time we saw the tin can, he was in critical condition after a lengthy battle with Superman and one of Braniac’s Collectors. Now, General Lane and his men have found a suitable power source that can hopefully revive the catatonic man-in-a-can: Kryptonite.

Unlike his previous outing in the New 52, codename “Metal-Zero” finally has Kryptonite. While this might seem like a minor change, it is what makes him such a dangerous villain for Superman. Big Blue rips through steel and machinery on an almost daily basis, so Metallo really needs an ace in the hole to compete.

While Kryptonite can end up being an obvious and overused way to defeat Superman, at least with Metallo, it’s not a hidden effect. The guy is a robot powered by Kryptonite – Supes can come prepared. The comic also touches on Metallo’s impending addiction to the feeling he gets when he gets a rush of energy from the kryptonite. While this dynamic isn’t really explored, it’s still nice to see.

While there is a metamorphosis from U.S. Soldier to supervillain, the comic definitely goes to great lengths to show us that Metallo was a sadist before his days of super crime. John Corben kills innocent civilians in the Middle East—apparently a habit with the charmer.

The nice part about this is that it’s an alternate take from good guy turned bad guy – Metallo is sympathetic only in that so many people have betrayed him. He might have tried to be good, but he has always had a sadistic side. This makes for a more realistic transition to hardened, murderous villain. He was already a hardened, murderous soldier, which is why General Lane tries to kill him in the comic.

The issue, albeit briefly, shows Metallo joining the Secret Society, which means it at least involves the current storyline a little bit.

The artwork from Pugh is mostly fantastic—very dark and really brings the comic to life. A notable favorite design is that of Scarecrow on the last page of the issue. Pugh seems to have a great style. Though it may work better for darker comics than Superman or Action Comics, Pugh’s style fits Metallo #1 very well.

Metallo gets in a lot of fights this issue. That is not outright a bad thing. The bad part is that his head is exposed, and, you know, not metal. This means that in every fight he has been in, nobody has thought to shoot at his head.  The dude is a walking metal man, but right there is his fleshy head – it seems to be a fairly obvious target and the fact that nobody shoots at it takes away from the reasonability. Sure, suspension of disbelief in comics is necessary, but it’s like having a target right on your Achilles’ heel, and everybody just ignores it. Just put a helmet on him, and I’ll move on.

Metallo is not exactly a relatable character. It’s hard to find reasons to care for the dude who kills 170 without a second thought, especially when the character is a rage-fueled cyborg. Metallo has been dealt a bad hand, but he is really playing it wrong, and seems to be an inherently bad person. While this works to make him a more believable super-villain, they have to capture what makes him a believable human as well.

Metallo is a villain that both makes sense, and doesn’t. It makes sense that a sociopath who is part of the army might become an even more violent character without the rigid structure of a military, but Metallo’s hatred of Superman and Lois Lane seems petty. Either way, the issue does a good job of showcasing Metallo’s hatred, desire for revenge, and his determination, all while being an entertaining read.