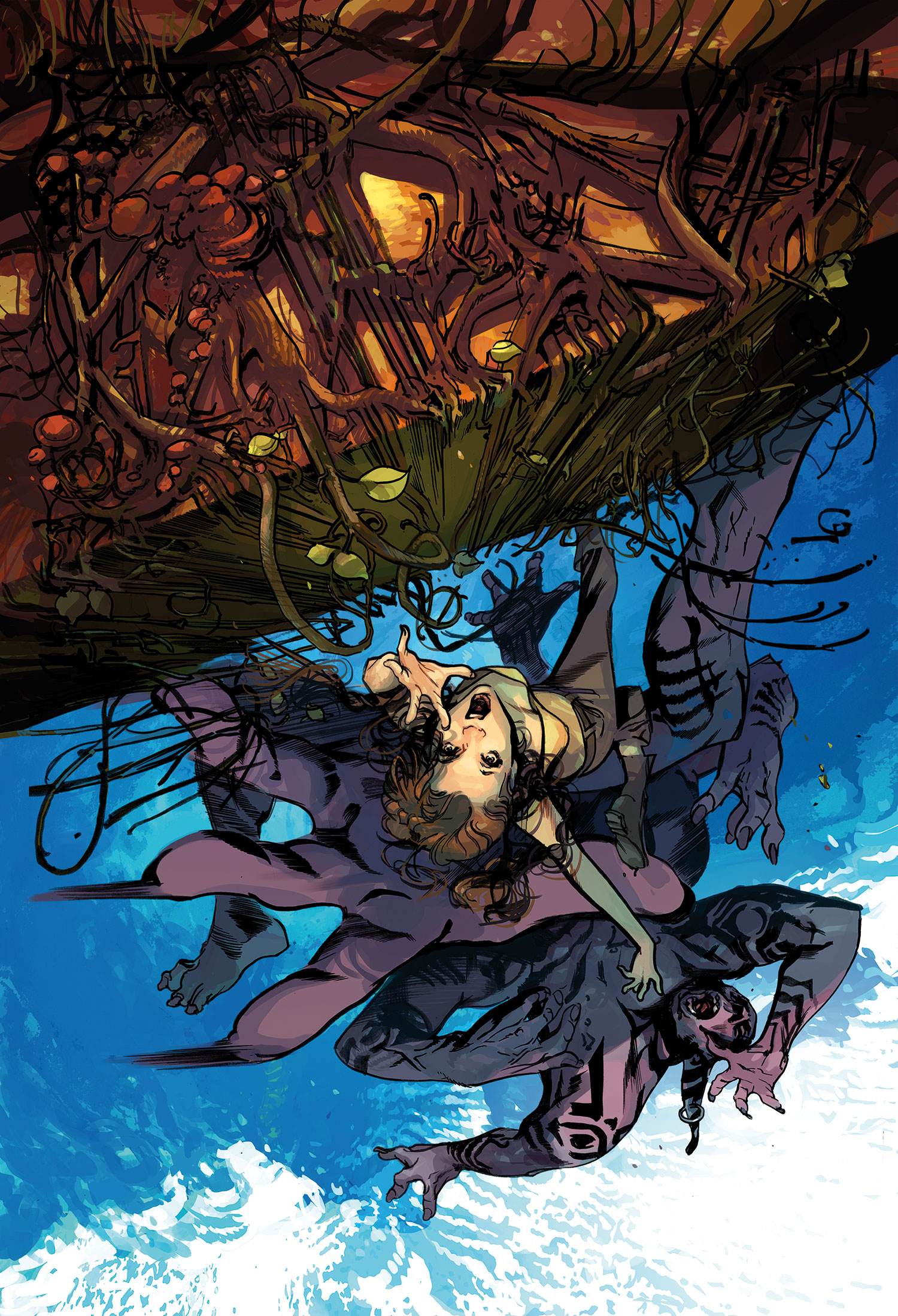 In the second installment of Ian Edginton and Francesco Trifogli’s new series Hinterkind, Prosper and Angus have a dangerous run-in with the creatures of the Hinterkind, while leaders of the mysterious Sidhe tribe debate the future of the human race. The authors continue to build up the mythology and mystery of the book in this second chapter.

There are so many monsters in this book, which is an absolutely beautiful thing. Fans of mythology will thoroughly enjoy the author’s attempts to incorporate as many mystical beings into the story as possible. Fauns, ogres, centaurs, trolls, and many more monsters make appearances in the book. The opening battle scene contained some humorous and realistic dialogue that readers can only experience in a mature book. Edginton’s dialogue was spot-on for the remainder of the story, which made the book enjoyable.

The author is also developing the plot well. The reader has a much better idea of what direction the story is headed in, but also has to be wary of surprises. Scenes like the one between the Queen of the Sidhe and her daughter reveal the details that will be driving the book going forward, and the role of Jon Hobb was an unexpected twist that kept the book from following a predictable plot line. The issue ends with a serious raising of the stakes that will likely change the protagonists’ mission going forward.

The artwork in the book is, for the most part, a positive. Trifgoli draws his monsters very well and captures emotion expertly. The look of desperation and despair on Prosper’s face while she contemplates the fate of Asa and the others is a stellar representation of real emotion. Readers can also see the anger and arrogance of the face of the Princess of the Sidhe as well as the greed on the visages of the monsters later on in the issue. Colorist Cris Peter delivers excellent work throughout the issue, especially in the California interlude.

Trifogli’s art faltered at times. At one point, Angus looks more like a vampire than a teenage boy whilst holding a car door. The troll’s facial wounds disappear and then reappear on the next page. Inconsistencies like that hurt a book visually. Jon Hobb’s character design was rather generic, like something straight out of a history book chronicling nineteenth century America. It seemed inconsistent with the modern look the other characters have.

As for Edginton’s writing, the only problem I had was that certain conflicts that seemed extremely important at the beginning of the issue suddenly became meaningless at the end. The plot takes a huge turn for the better at issue’s end, setting up what should be a much more intense, interesting, monster-filled plot. That is all well and good, but conflicts like Angus’s tail and the fate of Asa are seemingly thrown out the window with this new development. Considering the fate of her acquaintances led Prosper to a critical emotional moment that now feels meaningless. If the plot continues in this direction, then the original conflicts will be either lost or put on the back burner for an extended period of time, which is bothersome to a reader that was interested in how those conflicts would resolve.

Hinterkind #2 had some great moments and several surprises, but it also had its fair share of disappointments. Inconsistent art and rushed storytelling left more to be desired from this book. All in all, it’s a title worth reading based on the potential and monsters that it contains.