Could Wally West and Donna Troy Be Heading To The New 52 DCU?

During this weeks DC All Access Video viewers got a tease that could potentially have exciting ramifications for characters since lost in the DCU “New 52.”

Stephanie Brown, the Spoiler and former Batgirl, has already been confirmed to be making a appearance in the upcoming Batman title Batman: Eternal, scheduled to release in the Spring of 2014 and written by Scott Snyder.

This weeks DC All Access teased viewers with the potential return of two other fan favorites: Wally West, the Flash, and Donna Troy, former Teen Titan. As Dan DiDio and Jim Lee talk about the impending move from NYC to Burbank, CA a white board is visible in the background.

Written on said whiteboard is this:

So what could this mean? Let’s decode this super secret message. SM / WW most likely refers to the new Superman / Wonder Woman title penned by Charles Soule. “Flash” speaks for itself. And BMW could refer to Batman weekly, meaning Batman: Eternal, which is to be a weekly title.

So what is “Amazon”? It could simply be a reference to the Wonder Woman mythos. Or it could be a brand new title called Amazon. But what does Stephanie Brown have to do with the Amazons? There simply isn’t enough information at this time to confirm or deny either possibility.

Dan DiDio has personally stated on his Facebook page that Wally West “might” return in 2013 in the pages of Flash.

Be sure to keep checking DCN as more information becomes available! 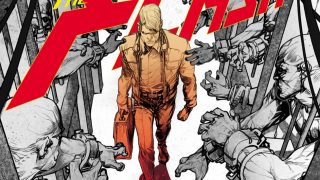