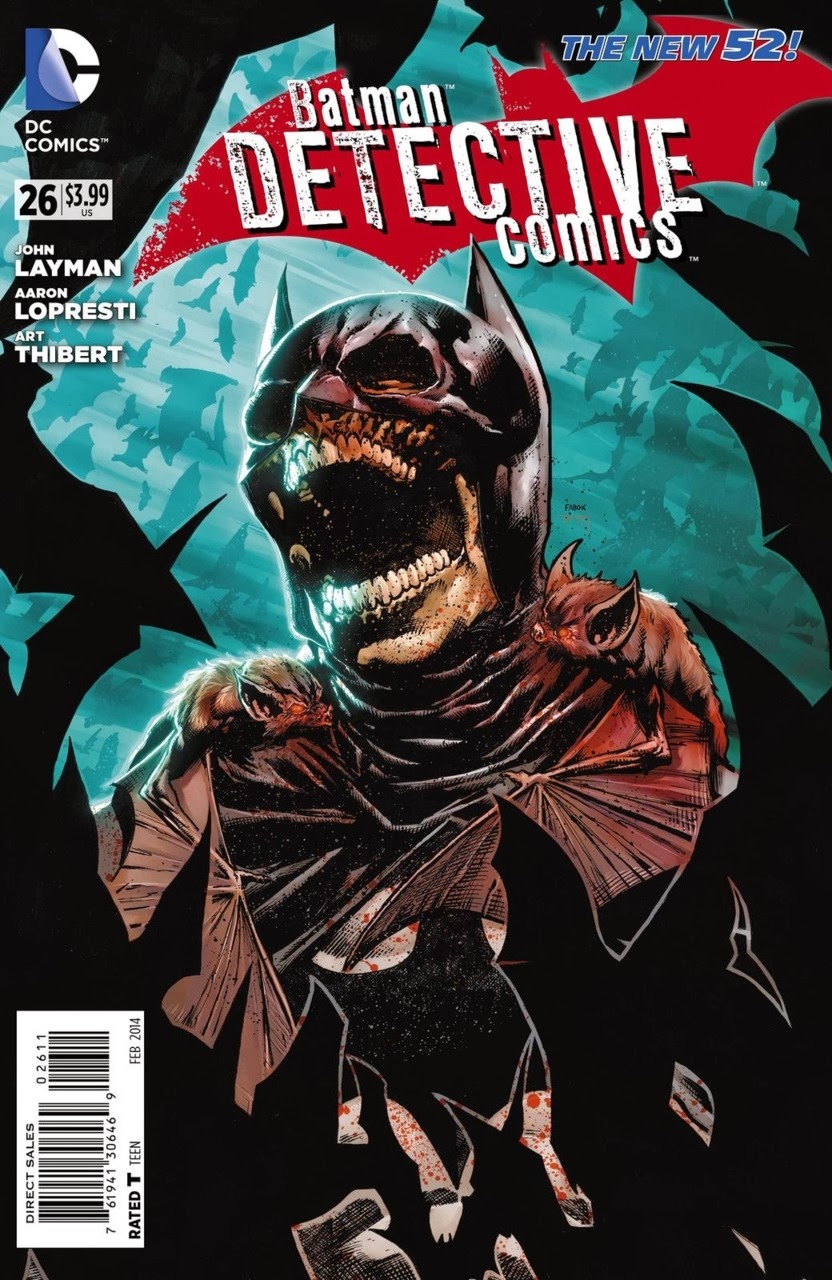 Detective Comics #26 wraps up the tale of Kirk “Man-Bat” Langstrom and his wife, Francine, a.k.a. “She-Bat.” The ill-fated couple made their debut in the New 52 back in the super-sized issue of Detective Comics #19 and have been starring in the back-up stories since then. Throughout those back-ups, readers learned how the good scientist became the terrifying creature of the night known as Man-Bat. His origin is rebooted for the New 52 and that has its pros and cons.

John Layman, the writer of Detective Comics, has done an excellent job connecting several storylines since he began writing duties on the title back with Detective Comics #13. Kirk Langstrom didn’t appear until issue #19, but he impacted this universe in far-reaching ways. From Talia al-Ghul’s army of man-bat commandos to Emperor Penguin and The Wrath, Dr. Langstrom’s atavistic gene recall serum has figured prominently in several story arcs. Layman expertly connects Langstrom to each of these arcs and the reader sees them tied together through Kirk’s experiences. It’s great to see the ripple effects from these events and have some concrete continuity in these comics, as many comic books will quickly forget how one thing led to another.

Over the course of the back-up stories, readers empathize with the good scientist as he’s simply trying to do the right thing. Remember: he’s the hero of Detective Comics #19 when readers first see him. Even as he slips further and further into madness and addiction, Kirk Langstrom tries to gain control of his life and prevent any more tragedies. Detective Comics #26 focuses on Langstrom trying to atone for his sins and ties-up his story, and that of his wife Francine, nicely. It is a tragic love story (at least for Kirk), and their relationship can lead to many more potential stories in the future.

Aaron Lopresti does the pencils for this issue and he does the job well. In particular, the facial expressions and body language of Kirk Langstrom and Batman were great, letting the personalities of the characters shine through. However, Lopresti’s art is lacking a certain something, stylistically, that makes him stand out above the rest. Overall, he did good work and got the job done.

The rebooted origin of Dr. Kirk Langstrom and his wife Francine has been changed somewhat significantly from its previous form in the old DCU. The biggest change involves Francine, a scientist working alongside Kirk at Caldwell Technologies. It turns out that Elliot Caldwell, The Wrath, hired her to spy on Kirk, learn about his research, and use it to develop sonar weapons for Caldwell Tech. Francine isn’t even her real name! It’s Felicity Lee. And since she’s a corporate spy and not actually a scientist, she uses the wrong type of bats and unstable chemicals in her serum which turns her into a vicious, blood-thirsty, vampire bat creature called She-Bat. And if that wasn’t enough for poor old Kirk, she never even loved him to begin with. That’s rough. Once Francine/Felicity gets a taste of her own serum, she never looks back, drinking enough of the concoction to permanently alter her DNA and keep her in the She-Bat form as she preys upon the residents of Gotham City.

This is all to say that the husband-and-wife team dynamic of the old DCU is absent in this New 52 version. The love story that had them working together and sharing in their experiences as occasional anti-heroes is gone. Instead, his wife is a straight-up murderous, evil woman. At the beginning of their story, readers empathized with Francine as Kirk’s inner-demons were the antagonist. But as soon as the focus shifts away from Kirk’s problems and it becomes clear that she is the one who is truly evil, all relation to Francine is lost. On one hand, this makes Kirk more human because the woman he loved from the bottom of his heart is gone and never to return. Unrequited love is something everyone can relate to. However, this comes at the expense of Francine’s character. Before, she was complicated with the same depth as her husband: struggling to do the right thing and make the world a better place through science while fighting back the animalistic, evil urges within. Now, she’s much more one-dimensional and flat, and for what? So readers could sympathize with Kirk more? Readers already had a few reasons to root for him. But alas, this is another marital relationship taken apart and soiled by the New 52.

Detective Comics #26 was an enjoyable conclusion to Kirk Langstrom’s origin as Man-Bat. John Layman gets the reader to care about Langstrom’s tragedy and he provides science-backed excitement along the way. Aaron Lopresti’s art is satisfactory and solid, especially the body language. Even though the relationship between Kirk and Francine suffered some because of the New 52 reboot, it was executed well and opens up many new story ideas. It will be interesting to see what happens to Kirk and Francine/Felicity in the future!