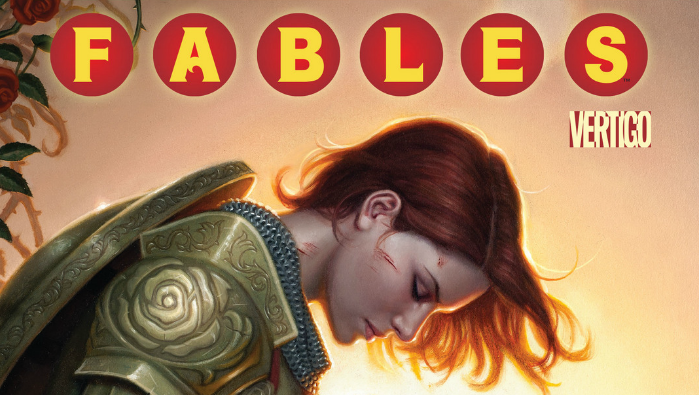 The newest issue of Fables is filled with many great character moments, including both the series’ notable sense of humor, as well as darker inclinations. It also does a good job of underlining one of the most important themes in this decade old comic. This comes at the cost of momentum though, as little actually occurs. Fables #136 could become one of two things: either the moment in which a memorable conclusion is set in motion, or the beginning of a tedious series of place setting issues. For now, it’s impossible to know which direction the series will lead.

Fables #136 is filled with many great character moments from relatively new characters and those who have featured in the series from the very beginning. Rose Red’s scenes make for the most obvious focus. Beginning the series as an irresponsible wild child she is now fully transformed into a responsible leader, Queen, and avatar of hope. It’s a transformation that is only believable given the context of 135 previous issues. Her dramatic characterization may be one of Willingham’s proudest achievements and this issue makes clear why that is. Lady’s moment at Wolf Manor and the bar play up the dramatic irony created in further issues. Although she fails to mention her fate, it has already been spelled out and this is one [meet-cute — What is a “meet cute?] that should not be missed. Miss Sprat functions as an effectively creepy villain in the final pages of the book. Her attempts to seduce King Cole play like a cat taunting a mouse before consuming it alive. In some ways she’s a more effective villain than her predecessor Mister Dark. She was powerless and shunned for so long in the series that the concept of her as a great power is terrifying.

Using the character work, the issue focuses itself on a single thematic concept: role-reversal. Every scene in Fables #136 has something to do with a change in established roles. Rose Red recognizes her changed position of leadership and the gender change as she fills King Arthur’s shoes. Lady is handed her fate, instead of handing it out. Miss Pratt is in a position of great power after years of relegation, while King Cole is left powerless in her presence. The examples of role reversal fill every page of the issue and are pondered in several conversations. The very fact that the majority of heroes and villains featured in the issue are female plays as a reversal upon mainstream comics’ tendency to be male oriented. It’s an idea that resonates throughout all twenty pages and will certainly play into the comics’ upcoming conclusion.

Although James Jean’s award winning work will be missed, Daniel Dos Santos provides a truly stunning cover. It captures Rose’s new mentality and her position within the kingdom she is creating. Although the cover scene is not drawn exactly from the story, it captures the tone of Rose’s character arc perfectly.

There is almost no actual story in this issue. Despite providing significant focus to Rose Red, Lancelot, Miss Sprat, and Lady, no real decisions occur. There are no act breaks in a title filled with many stories, big and small. That’s problematic as decisions provide momentum. As much as readers may enjoy comedic beats (of which there are several) or mysteries (of which there are several more), they serve to enhance stories, not drive them forward.

In the best-case scenario, Fables #136 will be similar to the fourth act of a Shakespearean drama. It will be a necessary period in which pieces are set in place for the conclusion in order to provide catharsis and ensure the themes of the story are made clear to the audience. It will also be mercifully brief. However, it could also prove to be the first of many issues in which plots are set in motion and revelations are made, but nothing of consequence really happens. That would be unfortunate.

Fables #136 is a perfectly standard issue of this series. It may age well as Willingham’s goals become more and more clear, and it creates pathways for the great character moments and resonant themes this series has achieved in the past. But for now, it is pretty typical. Moments like this are often necessary in longform storytelling, allowing for powerful act breaks in the near future. There’s plenty to chew on in the meanwhile with genuinely funny dialogue and wonderful character beats. As long as some genuine change is made in the near future, this is a forgivably slow issue. If not, it could be the beginning of a bad trend.