THE LEGACY OF BILL FINGER…THE RIDDLER 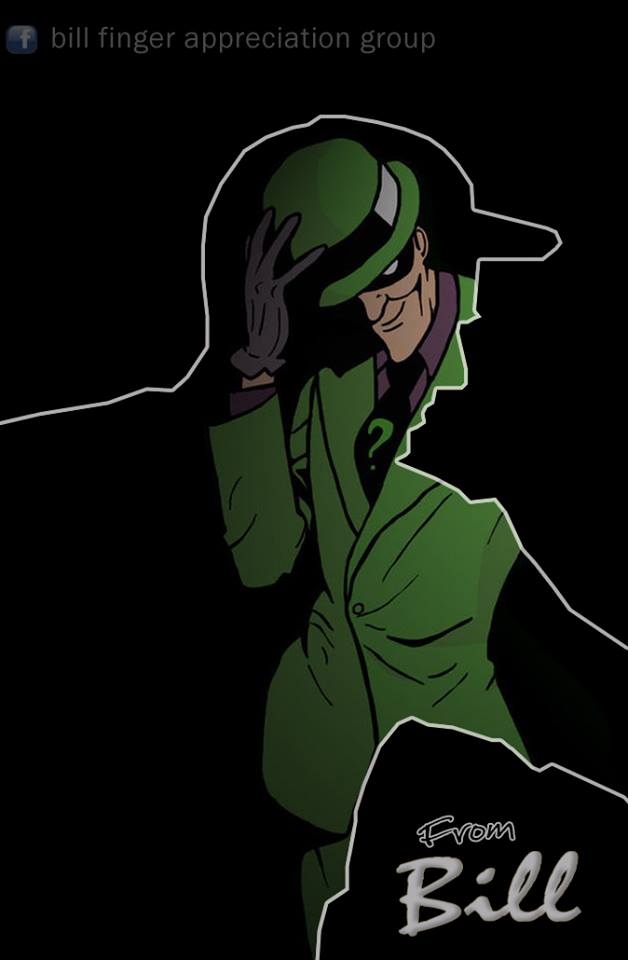 The Riddler was created by Bill Finger and Dick Sprang, first appearing in Detective Comics #140. (1948)

As a young boy Edward Nigma earns a reputation as an expert problem solver, when he cheats his way to a classroom puzzle-assembling victory. As an adult he becomes a carnival sideshow attraction “Match Wits with E. Nigma, Puzzle King”. Bored with the life of a carney and wanting to challenge himself. He dons a domino mask and a pair of lime green tights adorned with question marks and goes on a crime spree. Using puzzle clues, he tips Batman off to his crimes.

The Caped Crusader solves the Riddler’s puzzles then tries to capture his tricky foe.

Riddler eventually leads Batman into a glass maze with a bomb inside. Batman finds his way out despite the fact that Riddler has barricaded the exit.

In the explosion, Riddler falls off a pier, leaving only a question mark behind. Batman wonders whether his foe has died, or if the Riddler survived.

The Riddler would survive to plague Batman and Robin once more, this time foiling the Dynamic Duo by offering people cash and prizes for appearing at the scenes of his crimes making him difficult to capture. The plot was eventually foiled and Batman and Robin would apprehend the Riddler.

This would be the Riddler’s second and final golden age appearance.

It would seem not much can be found on the creation of the Riddler, I guess he’ll remain an ENigma!

The Riddler in other media:

“I developed the Riddler’s fiendish laugh at Hollywood parties. I listened to myself laugh and discovered that the funniest jokes brought out the high-pitched giggle I use on the show.With furthur study I came to realize that it wasn’t so much how I laughed as what I laughed at that created a sense of menace.”

John Michael Higgins:(voice) “Batman: The Brave and the Bold”