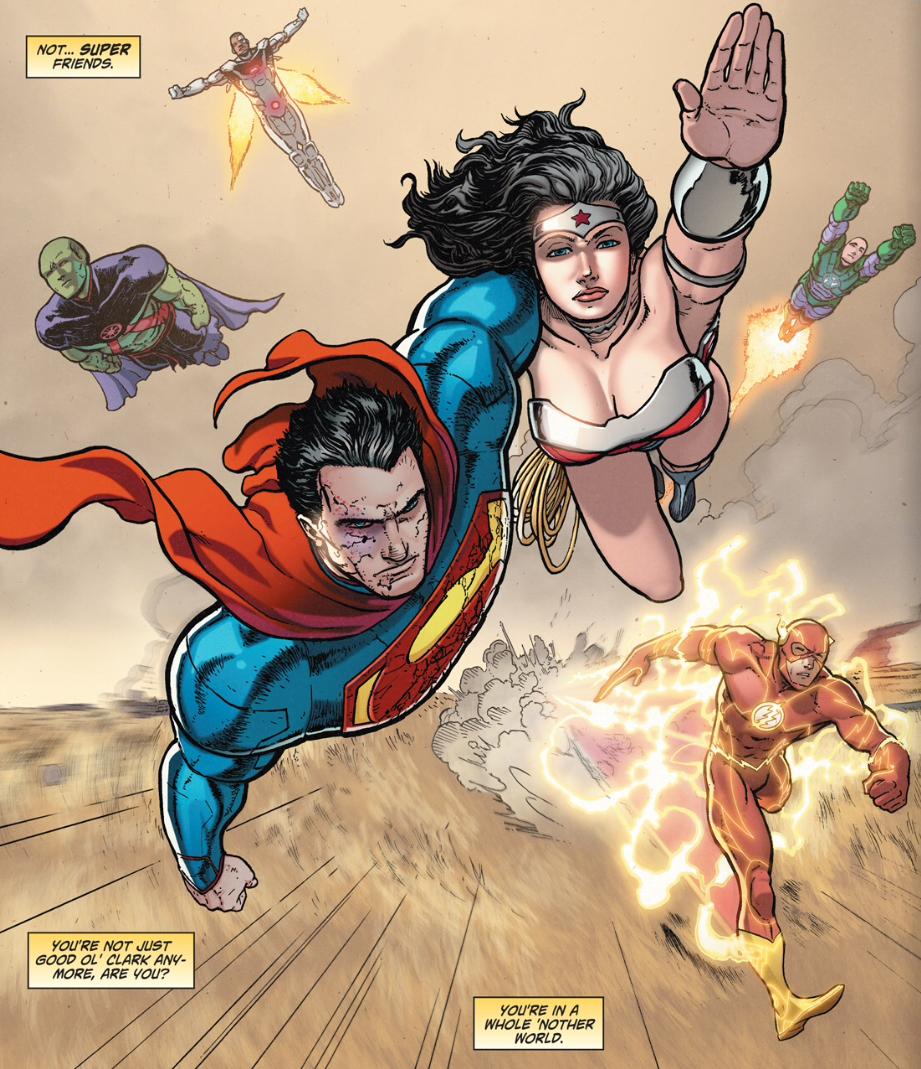 We enter the second part of “Superman: Doomed” with Superman lying in a smoking crater. He’s just barely killed Doomsday and he’s already feeling the effects of the Doomsday virus. A Lex Luthor-led League tries to bring Superman in for examination but he manages to slip away. Machinations start to click into place around Superman as he notices a change in demeanor…

The characterization here is excellent, as it usually is in Greg Pak’s ACTION COMICS. Superman is innately likeable even as he begins his shift into a Doomsday-like creature .There was a nice callback to ACTION COMICS #25 when Superman worried about “punching down” against some hunters. In such a new universe, any bit of continuity helps.

Steel arguing with General Lane over their shared history is also well-written. Their conversation covers many important plot points from the earliest (post-Flashpoint) ACTION COMICS issues. It’s notable because Greg Pak chose to cast aside nearly all of plot threads and ideas of Grant Morrison’s run when he took over the title. That’s not a criticism, because no one can out-Morrison Morrison, but it’s still great to see earlier stories being built on.

Lana Lang and Wonder Woman also get good moments. My favorite was Lana watching the Justice League take Superman away. A lesser writer would’ve had Lana be jealous and upset about her old friend leaving her, but here she’s just happy Clark can “fly with the eagles”.

Wonder Woman and Batman explicitly trust and support Superman here. It’s how you would treat someone who helped you save the world a dozen times. They both allow Superman to break free of Lex Luthor’s planned quarantine to find his own solution. The Holy Trinity feels like family here, already knowing what each other is thinking and feeling. It’s a heartwarming moment that will doubtlessly contrast with the heavy grittiness we’ve been promised later in the event.

The art is also great. Of note is the scene where Superman imagines thrashing Lex. It’s brutal without being unnecessarily graphic.

Very little story progression happens here. Superman realizes he’s changing and…that’s more or less it. For the second part of an arc, an awful lot of this feels like table-setting. Steel and General Lane spend a few pages establishing their relationship for anyone new to “Action” but not much else. And yet with all this setting up for Part 3 there’s no hint as to what Superman plans to go or do next.

There’s also not much done to make this new “Doomified” Superman feel like a threat. He smashes the helicopter of some bloodthirsty hunters, and then goes out of his way to keep them from any physical harm. This may be the only issue in the entire New 52 where you could argue that Superman isn’t aggressive enough. I know it would have been silly to have Superman immediately start beating up his friends, but it doesn’t feel significant unless you immediately go on to read “Superman/Wonder Woman #8”.

As part of an ongoing event, ACTION COMICS #31 successfully sets up the pieces and strengthens the characters’ bonds for when they are inevitably tested. But on its own there’s not enough incident to grab you. No doubt this will read much better in trade.