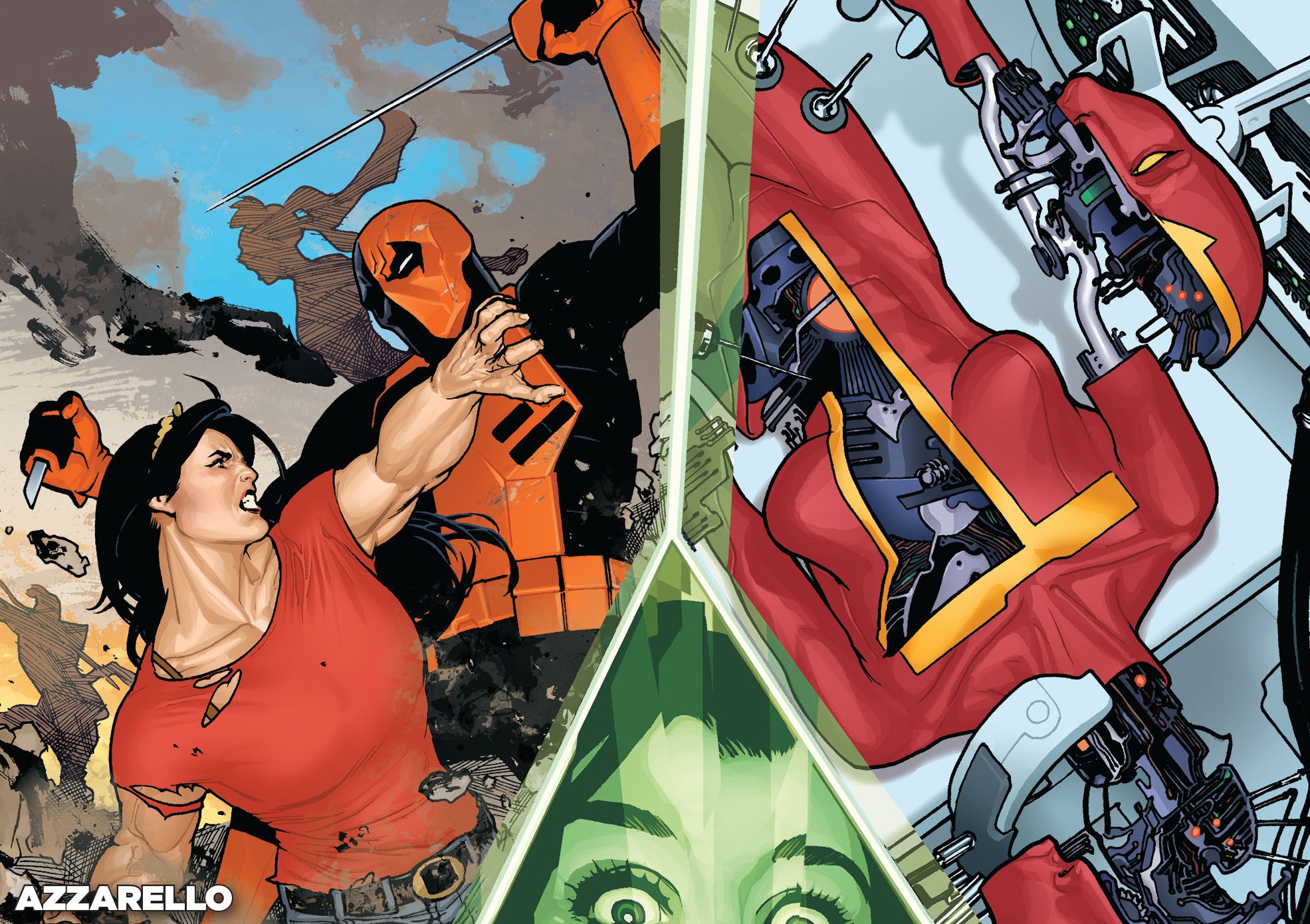 Futures End #14 has one of the most exciting covers yet with Barda fighting Deathstroke, Lois Lane, Red Tornado, and Mister Terrific all sharing the spotlight. Unfortunately the issue doesn’t live up to the cover’s excitement, and Mister Terrific isn’t featured at all. The series continues its build up with little pay off once again.

One of the more confusing aspects of last week’s issue is addressed right away. Fifty Sue gives a quick explanation about ho

w she appears to be in two places at once, which swiftly diminishes our confusion. Aside from Fifty Sue’s dialogue, her interactions with Barda and Emiko are one of he most enjoyable moments of the issue. Their dialogue feels natural and perfectly describes their new and unsteady relationship. Emiko is much more likable than she is in GREEN ARROW, and Barda’s vulnerability is a fresh spin on a fan favourite character.

Recently this series made attempts to ramp up the excitement but it seems the series has gone back to its slow pace.  Once again Batman Beyond’s subplot is predictable and continues to do nothing of significance. Meanwhile Red Robin remains to be completely pointless and unlike anything else seen i

n the series. While I understand that a year of weekly comics will have a slower pace, it’s becoming apparent that this series could have been better organized. I personally believe there was a push to have this series be a year long, though the writers may not have had a years worth of stories.

I mentioned earlier that Fifty Sue explained her appearance in two separate places at the same time early into the issue . The explanation is poorly explained and quickly neglected as if were put in the issue last minute. Executing and explanation like this doesn’t seem natural and makes it appear to be placed in the issue out of necessity. Its possible with multiple writers on the series its likely both writers planned to use the same character at the same time and needed a quick fix.

This is has a few good character moments, especially between Barda and Emiko as they form an unlikely alliance. Unfortunately the rest of the issue issue is bogged down with slow plot lines that add very little to the series as a whole. Hopefully this issue picks up the pace and produces some big reveals soon and help the series live up to its potential.