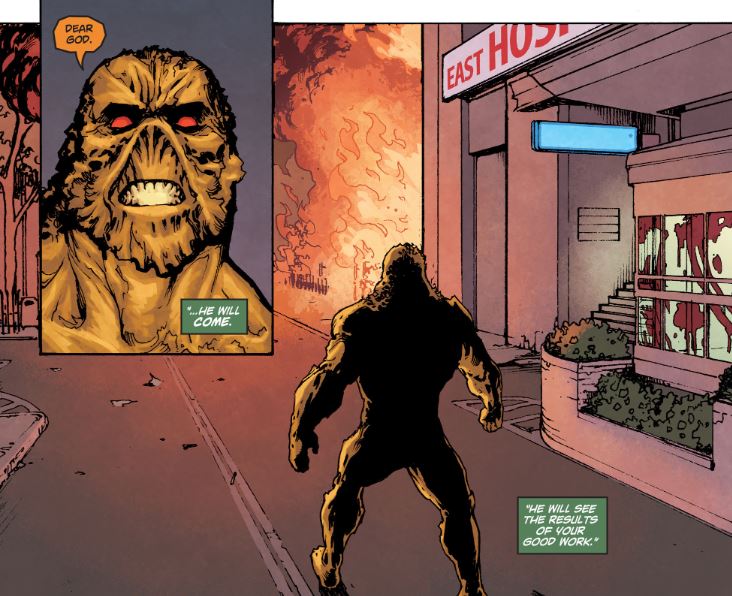 SWAMP THING #34 by Charles Soule and Javier Pina wraps up some plot threads a little abruptly, but not unsatisfactorily as Holland confronts Weeds and Wolf in the middle of a five-wanted-stars murder spree. The fight with Wolf was pretty cool, lots of fire and blood and punching and explosions, but the real meat of this issue is the sort of underplayed death scene involving Jonah, a former Swamp Thing.

Holland offers comfort and compassion to his dying ally, fixing him up with some vegetative bandages around his wound and carrying him into the grove and putting him gently to rest where he can be reabsorbed by the Earth.

Death for Jonah isn’t a permanent end, he’s returning to the Green, his mind is being set free, and his parting request to Swamp Thing: he was halfway through One Hundred Years of Solitude, so if Holland could read that someday, Jonah can find out how it ends through Swamp Thing’s eyes. I know how he feels, I’m trying to eat healthier to make sure I’m still alive when the new Mad Max movie comes out next year.

This is one of the things I love about Swamp Thing. It can get pretty deep and philosophical in a way that is very unforced. This meditation on death is bookended by Wolf’s suicide following his confrontation with Holland. An ugly, painful ending, and one that Holland refuses to soften, reminding Wolf that he could store him in the Green for awhile and give him a chance at redeeming himself, but he won’t because to hell with that guy.

Jonah’s acceptance of his passing speaks to a certain interpretation of death. “It is the body which is immortal. It only changes its form after clinical death, remaining within the flow of life in new shapes.” – UG Krishnamurti

Although this is a Superhero Comic Book Death, and comes with a stipulation that Jonah’s consciousness and unique identity will remain a ghost in the Green, Jonah’s acceptance of becoming a part of the Earth again reminds me of this idea that death only exists for the ego.

This series has remained one of the most consistently impressive, artistically speaking. Tranquil images of nature are associated with Jonah’s passing while Wolf’s demise takes place in a crowded urban area. His death is violent and chaotic where Jonah’s is peaceful, and each of the characters that kick the bucket in this issue choose their place of dying. Jonah refusing an ambulance, not wanting to fight and struggle and beg and plead for more life, and Wolf refusing mercy.

It’s all about how you choose to look at your own inevitable death while you’re alive, man, because who cares what dead people think about it.

An atmospheric, philosophical look at death in Swamp Thing’s corner of the DCU. Great action and an intriguing cliffhanger cap off another typically well-written and illustrated issue.

This whole story seems to wrap up a little abruptly, and it looks like Weeds is over and done with before she ever did much to make her an interesting villain. However, this issue, like some of the best Swamp Thing material, feels more like a meditation on the nature of life than a straightforward superhero comic, so that’s almost immaterial.

Probably my favorite Charles Soule issue of Swamp Thing yet, #34 nails the formula for a perfect issue of this series: ugly monsters, a badass fight scene, and a Buddhisty philosophical conceit that your stoner roommate would love.