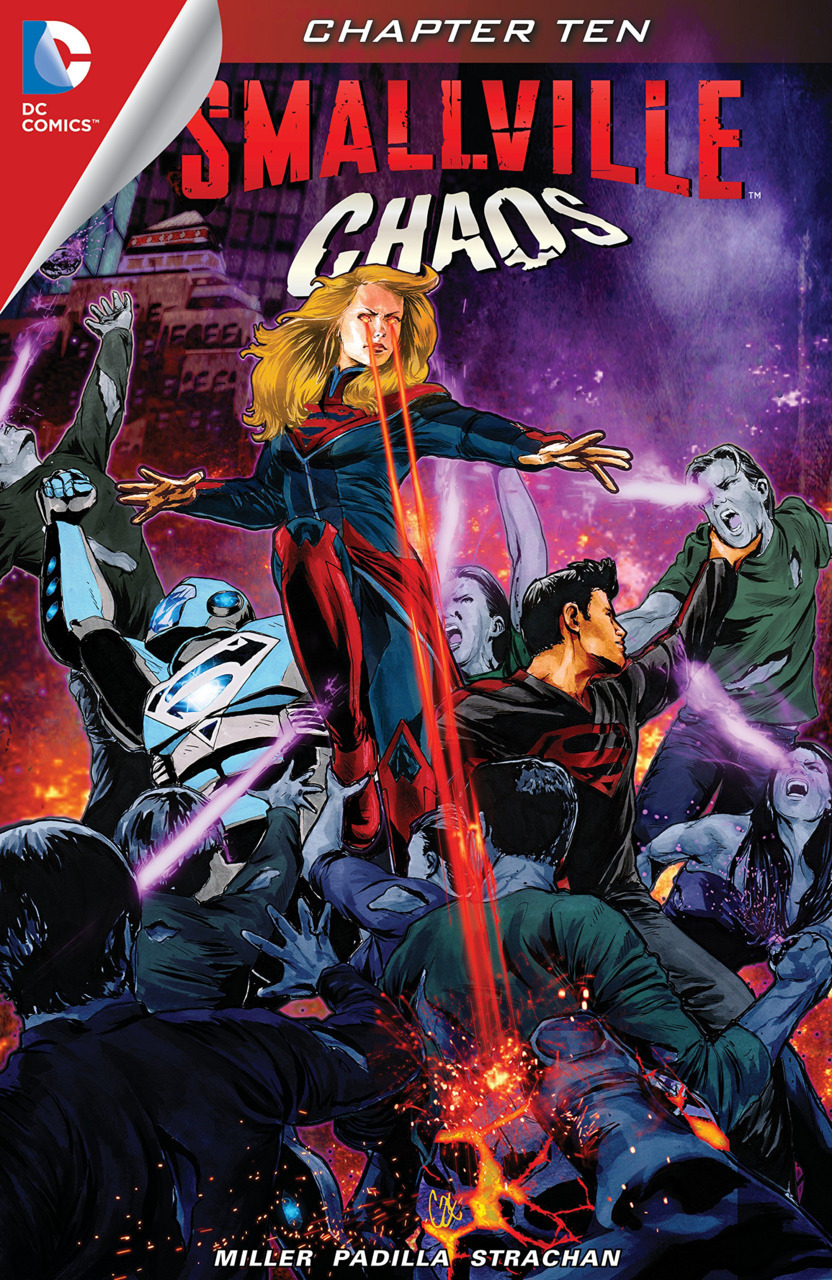 In SMALLVILLE: CHAOS #10, Supergirl and Superboy battle the Eclipso-infected throngs in Metropolis, Hank Henshaw takes the battle directly into the Hive-Mind controlling them. And Lois & Clark overhear something Lex wishes they hadn’t!

I have to say that I was really looking forward to this issue for a couple of reasons. One was to see the outcome of Lex suggesting that the Smallville universe should be rebooted. Second reason, was to see what happens with the Eclipso-infected people/throngs and how will Superboy, Supergirl, etc. handle the situation while Clark is not there to help. With that being said, I really liked this issue because of the writing by Bryan Q. Miller, and because of the action and progression of the story. I had some negatives light the artwork in this issue, done by Agustin Padilla.  But, let’s get more in depth with the positives and negatives of SMALLVILLE: CHAOS #10!

This issue started off with a quick fight scene with Supergirl, Superboy, and Hank Henshaw and an infect Eclipso throng. It was a nice opening scene that lead into cool up close scene with Supergirl choking out a throng! These scenes plays into what I like about the action of this issue. It wasn’t big or explosive  action, but it kept me entertained!

In this issue, Bryan Q. Miller is progressively bringing everything together for these final issues of SMALLVILLE: CHAOS. Certain scenes in this issue was setup so well because of the writing. For example, Cyborg Superman going into the Hive-Mind, collecting information on Eclipso, and creating a plan accordingly was well thought out, well written, and well paced. By adding Cyborg Superman, it creates a different approach to fighting Eclipso than just punching him to death. It made this issue more enjoyable than the other issues that came before, which created a kind of progression we have not seen throughout SMALLVILLE: CHAOS.

Lex in SMALLVILLE: CHAOS has just been pure maniacal…and I loved every moment! He is just as maniacal in this issue and you can tell he is convincing the Monitors. Hell Lex even had me convinced which atones to the great riding done by Bryan Q. Miller. Also Clark’s plan involves him dying…what exactly is he planning involving his death? I don’t know but I can’t wait until the next issue!

The only negative I have of this issue is the artwork. The cover, which is done by Cat Staggs, looks awesome, but the artwork throughout the rest of the issue looked a bit off. The action scenes were good, it just seemed as though the characters wasn’t completed. Like they had an unfinished look to them. This problem can easily be fixed and I think it will in the next issue, but for this issue it’s a negative for me.

SMALLVILLE: CHAOS #10 is was a good way to setup the events that will occur in this final stretch of the Chaos story. The writing was really good. The action scenes were awesome to look at. Yet the characters unfinished looked lowered the quality of the overall artwork. Bryan Q. Miller setup some good stuff with Superman creating a plan that is all or nothing. As well as, setup some awesome plans for the Eclipso situation. We are looking at an exciting ending for SMALLVILLE: CHAOS! Recommend.