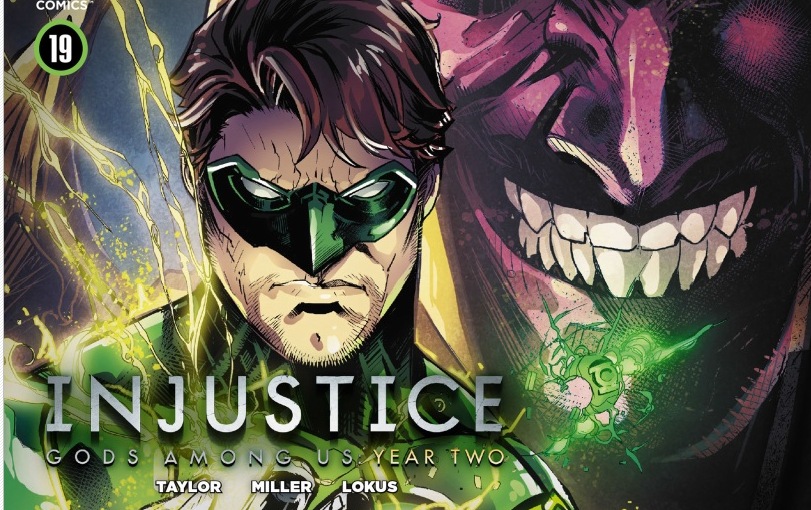 In the words of Tom Taylor “The end is nigh, but at least there’s Harley Quinn”, this week’s epic INJUSTICE countdown continues. The Green ring stands against the Yellow ring once more in that age old battle of Will verses Fear. Inner turmoils are revealed in this issue with the strongest force taking over but that doesn’t always mean it was the right choice.

If you happen to be a Lantern fan, this issue is dedicated to you. Jam packed full of ring action, the eternal struggle between Sinestro Corps and Hal Jordon of the Green Lanterns really heats up. I had only known a little about this relationship between the two from previous games played or comics read. But I found that the connection was very well executed for people who might not be that into the Lantern Corps story. The issue focused mostly on the fear inside Hal and the inevitable submission to the yellow ring. I always found Lanterns switching sides an intriguing concept as I had read in the “Blackest Night” and “Brightest Day” sagas. It was interesting to see him turn so quickly, though when the cost of love is on the table no one would blame him. Love makes you do the craziest of things even if it means wearing the ring of your enemy to protect those you care about.

As much as I love the consistent writing staying strong, it does have it an unusual art structure. Because the issue is split when released digitally, it has allowed DC to be able to change artists with each digital issue. Mike S. Miller is back on the job and the art style changes again. He has a fantastic talent for the large explosions and confrontational fight scenes that are littered though the issue. Taking the bright colors of not only the Lanterns outfits and physics, but also the environment around them, only enhances the bold ink work. It’s great to see so many colors throughout the panels and I love that I couldn’t decide on which image I liked the best from each page.

The scripting of the series is definitely the shining star to the success of INJUSTICE. Transforming across platforms both game and comic, I prefer the level of detail and plot twists the comic has been able to adapt.  A writer needs a great deal of knowledge when dealing with multiple characters and Tom Taylor has captured that. Hal Jordan and Sinestro have both been in the DC Universe for a long time fighting against each on multiple encounters and to be once again reinvented with a fresh new look is not easy to achieve. I found myself still in a familiar safe zone with what I knew about the characters though surprised at the new attitudes and personas that have been created within them for INJUSTICE.

One thing that really annoys me about the issue is how they start. Again and again it feels like we start with a few panels that really should have been from the last issue. With the digital split it’s strange to follow but in the trade back form it makes much more sense when reading it as one single release. The fight between Catwoman and Robin was mediocre which annoyed me since I thought he would have had a little more punch.  Despite Catwoman having the super pill, Robin should have at least given her a run for her money. I felt those whole first few pages really should have been in the previous issue and started the story again on a confusing note, except for Harley who made me change my mind with her random explosion comment.

The classic Corps battle in this week’s issue of INJUSTICE was an interesting clash of old foes. Not disappointing readers on action and suspense, the issue wrapped up with a predictable but intriguing twist.  So stay turned because everyone now really does have something to fear in store for them.