FBP: Federal Bureau of Physics, by Simon Oliver and Robbi Rodriguez is an intriguing and unique series. For those much like myself who are new to the series, it revolves around the adventures of Adam Hardy an agent in the FBP; which is a government organization created to deal with anomalies of a quantum nature.

Issue 13 deals with Adam and Rosa’s return to their own dimension from a stasis in a quantum reality and their interactions with their dimension’s manifestations of their adversaries in the quantum reality. Rosa agrees to help Adam search for his father who they come to the conclusion is still alive as Blackwood is actively seeking him out. At their core both our heroes and the villain have the same goal, finding Adam’s father.

This issue is thick with plot development and action; there wasn’t one dry or slow moment in it. Before I knew it the issue was over and I felt as if I had only just opened the first page. This is a major positive to this issue; while it may not be action heavy it unquestionably engages the reader and hooks them with the rapid and intense story progression which ends on a well done cliffhanger that leaves fans eagerly awaiting the next installment.

There aren’t any real negatives in this installment in the series. While yes it is lacking in action scenes it didn’t need them to drive the story along and that was refreshing to see in a sci-fi centered comic. The only potential negative other than a lack of action (for those looking for it) is that it is so plot heavy that it isn’t for a new reader. This in itself isn’t a true negative either, more of a word of caution. If you’re new to the series I would recommend starting from issue one and working your way forward. The writing is great, the story is well planned and it is essential to understanding this issue to have the previous issues under your belt. So for those of you looking to purchase this issue as your entry point into the series, don’t. 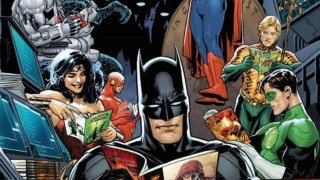