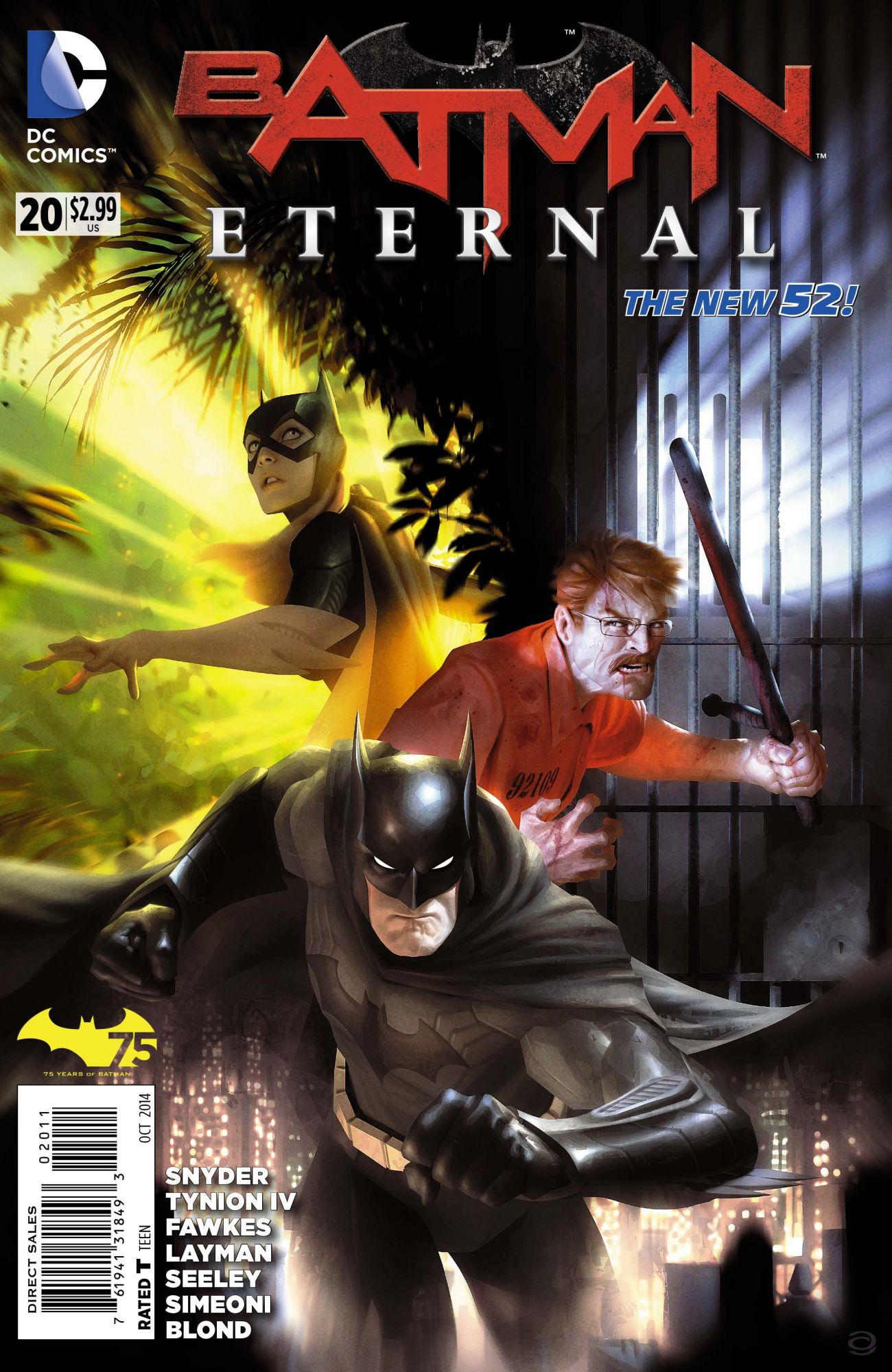 Hey guys, I can’t believe we have reached issue #20 of BATMAN ETERNAL! Seems like yesterday this series just started doesn’t it? Anyways, in BATMAN ETERNAL #20, James Gordon takes on Falcone’s crime army from inside Blackgate!

I really enjoyed this issue. I thought Tim Seeley did an excellent job with handling a plot that was developed by himself, Scott Snyder, James Tynion IV, Ray Fawkes, and John Laymin. The story was filled with a lot of action, some awesome resolutions, and yet it feels like something was missing. The artwork was so hit and miss in this issue that kind of drags down the issue. Let’s get more into detail with the positives and negatives of BATMAN ETERNAL #20.

The writing was the strongest point of this issue. The writing is always the strongest part of BATMAN ETERNAL. We had a lot of the current issues resolved, like the Killer Croc issue and the Blackgate problem. However, we also saw the resolution of Batgirl’s investigation with clearing Jim Gordon’s name, which I loved the way it ended with Falsario being killed by an unknown assailant. All these events resolving, and yet new storylines has been placed to come back to in the coming issues, which is an awesome move by Seeley and the writers.

I also loved how Seeley was able to juggle not only Batman as the main character, but, he’s also able to handle all of Batman’s supporting characters like Red Hood, Jim Gordon, Batgirl, etc. All the characters in BATMAN ETERNAL #20 was busy and I enjoyed all the supporting characters endeavors even more than I did Batman, Bard, and Killer Croc’s story.  What I really liked was the final page of this issue that I showed Stephanie Brown become Spoiler. It made me smile so much and now I can’t wait for next week’s issue to see her story progress!

Just the same as last week, I do not like the artwork this week. I thought it really pulled down the quality of the issue and it was distracting at times. The worst scene with Emanuel Simeoni’s artwork was majority of the scenes with Batman, Bard, and Killer Croc. Almost every scene was just a blur when it came to the action and artwork. It is disappointing when, for consecutive weeks the artwork has not been up to par as it normally is. Others may find his art appealing, I don’t, and BATMAN ETERNAL  is going to suffer slowly if they don’t change artists soon.

Another thing I did not like was the scene with Jason Bard trying to arrest Killer Croc. I thought it was too predictable. I’m starting to slowly not like the Bard character, and I don’t like that because he was one of my favorite characters initially. I really did not like him in this this issue.

Like I said earlier, I enjoyed this issue because of the writing. I loved how all the supporting characters stories were handled by Tim Seeley. I love that a fan favorite in Stephanie Brown finally starting to take a bigger position in this BATMAN ETERNAL arc. I was disappointed by the artwork and I’ve been disappointed for the last couple of issues and I think it is a problem that can be fixed. However, it still bring the issue down. Ultimately, BATMAN ETERNAL #20 feels like a mid-season of your favorite show on tv. You know how it takes a break, leaving you anticipating for what the rest of the season has. That’s what this issue is in my opinion. So I recommend.