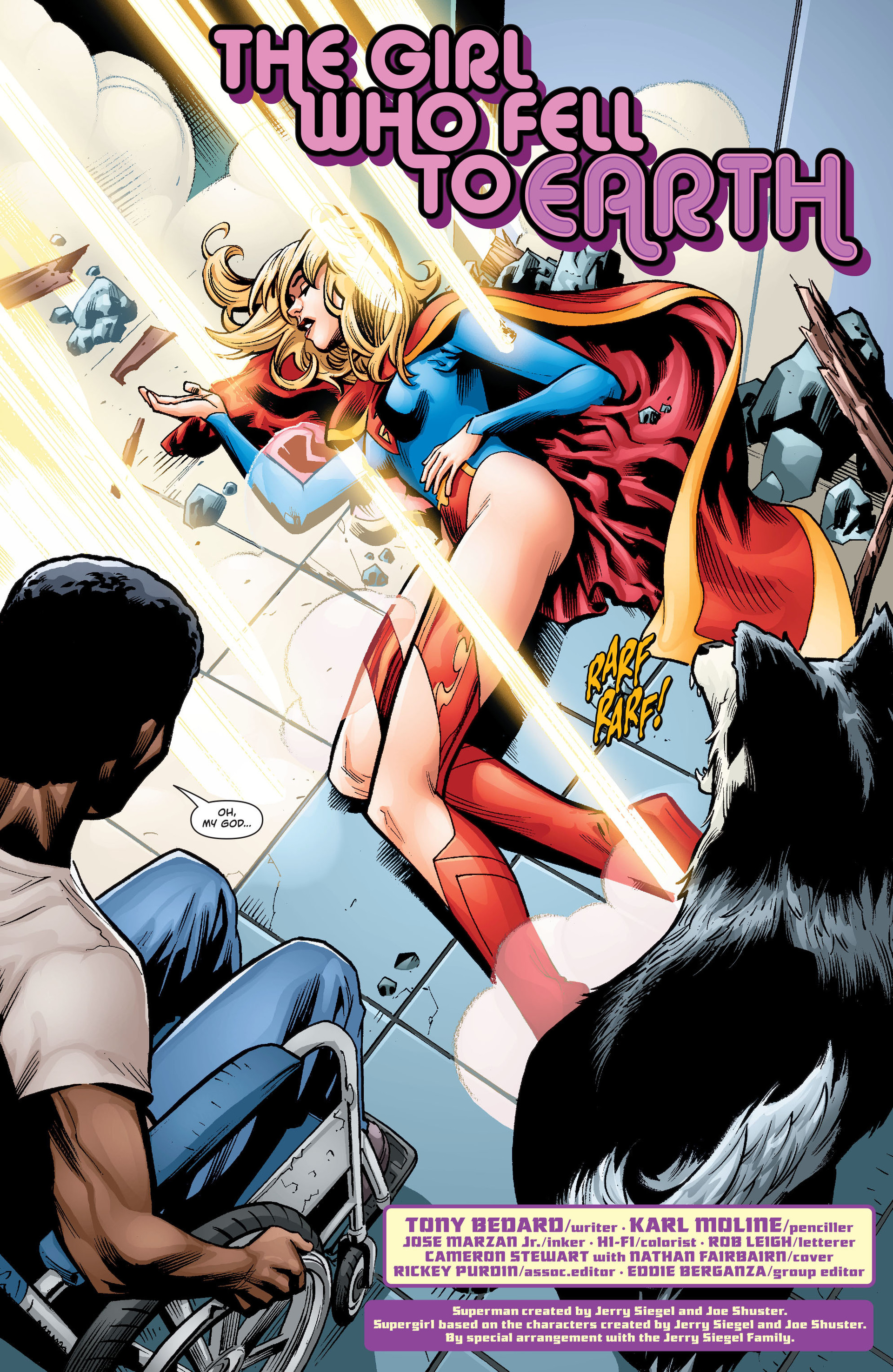 I have always been a big fan of Supergirl and with all of her incarnations it is nice to see her character approached in a fresh new way. While this issue was a little light on action, it brought in some important characters like Michael, Brainiac, and Cyborg Superman.

After being taken down by a cloud of kryptonite, Supergirl is rescued by a young man named Michael who nurses her back to health. Micheal shares his story and makes it clear that he trusts Supergirl and sees no reason to fear her. Energized by her time in a bunker under lead lined blankets, and inspired by her interaction with Michael, Supergirl takes to the skies for a quick recharge before setting out to find Micheal’s parents. The rest of the comic features a depowered Supergirl taking to the streets to rescue survivors of a mysterious plague of comas that have been sweeping across the country. The story concludes with the formation of a new love interest between Supergirl and Michael and a big reveal that Brainiac is behind the comas alongside a villain encountered earlier in the series, Cyborg Superman.

It was nice to see Supergirl return from her time as a Red Lantern and get back to her roots as a butt kicking kryptonian. I also loved the idea of the new love interest Michael. In previous story lines a human love interest has been central in making even overpowered characters like Superman and Wonder Woman relatable, and it is something that promises to take Supergirl’s character to the next level.

The shading and colouring in this issue was pretty good, if a bit boring. The most visually interesting frames were taken from flashbacks of a psychotic superman facing off against Wonder Woman where the use of bold color and shading really gives it a dynamic feel.

I also liked some of the villains revealed at the end of this issue. I think everyone would love to see Supergirl go for round two with Cyborg Superman and who doesn’t love a good Brainiac story.

This comic seemed like a throwaway issue that could have been three panels long. All the major plot points outside of the introduction to the character Michael were just alluding to other New 52 comic series. It almost felt like I was reading DC promotional material. I think that the writers of this comic are trying to create a story of a Supergirl who is in the process of dealing with her inner demons who finds a new way to relate to humanity, and I appreciate that, but I don’t think it really comes across well.

Even the art in this comic seemed to reflect that the writers weren’t taking this issue seriously. The only interesting art is in flashbacks to other issues. This comic features page after page of boring backgrounds and just depressing character design.

I think I liked the outcome of this comic more than the comic itself. A human love interest in just what Supergirl needs and while I don’t think that this issue dealt with it totally, this issue is a step in the right direction in addressing Supergirl’s connection to humanity and control over her own issues. I also liked that Brainiac and Cyborg Superman have been brought in for the next issue.

Supergirl 34 was pretty forgettable. It was a fun little read but I think that you might want to save your money and pick up the next one.