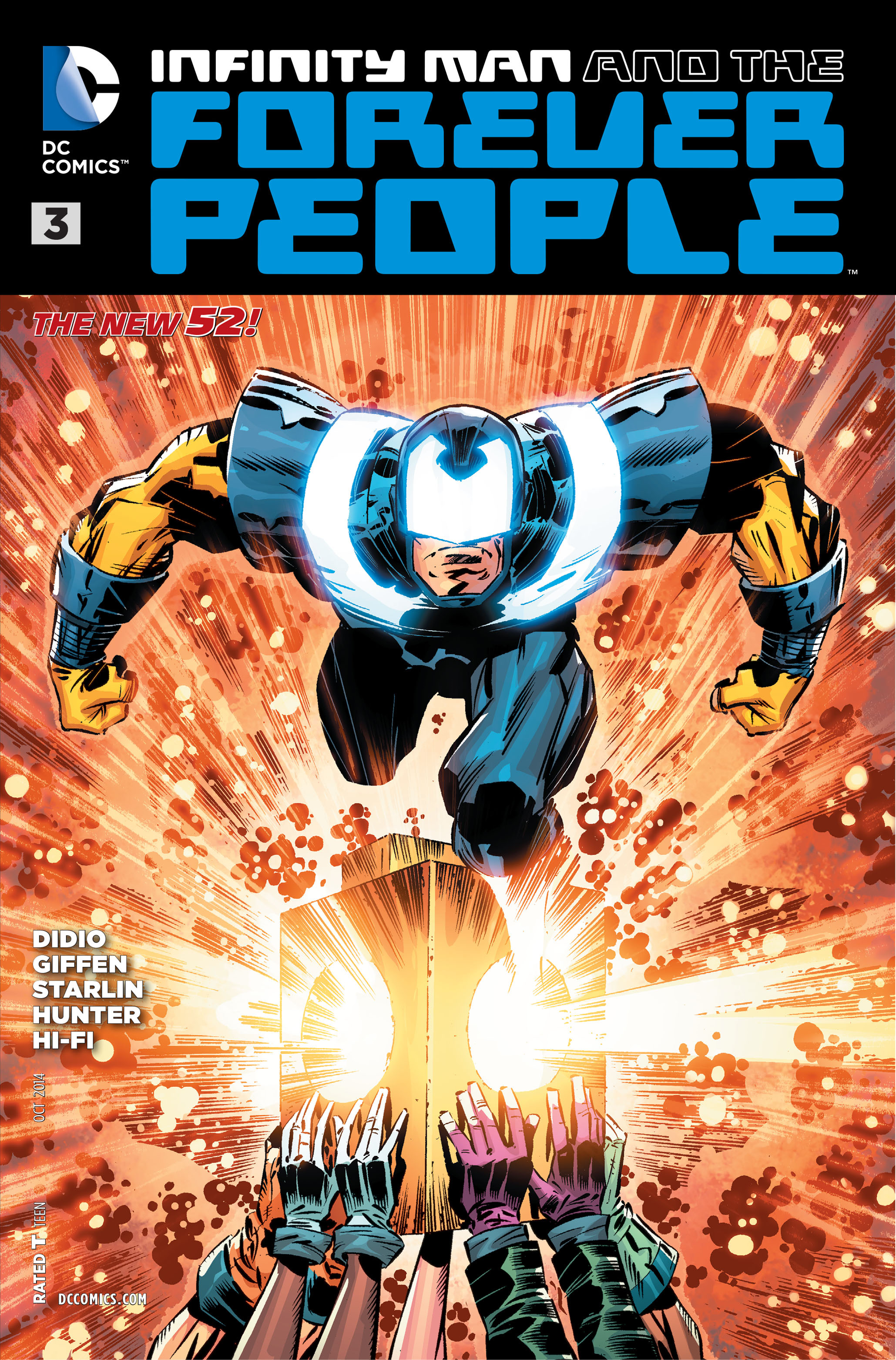 It is a bit early to say for sure, but Infinity Man and The Forever People is shaping up to be one of the most exciting releases this season.

In this issue the forever people meet the Infinity Man who describes his view of the New Gods. He explains that both Apocalypse and New Genesis are being controlled by “two brothers” Darkseid and the seemingly benevolent Highfather. Both of these brothers are imposing their own brands of “order” that is limiting the natural evolution of the universe, and it is up to the Forever People to help him bring an end to it.

The Forever People are then attacked by the character Mantis, both as a test of their abilities and, presumably, to demonstrate how the “control” imposed by the All Father can lead to disaster. Mantis was created as a byproduct of one of the attempts to engineer the growth of food in the desert sanctioned by the All Father. The group manage to fight off Mantis but not before Dreamer falls unconscious. Dreamer has a cryptic vision where we learn that she has some kind of connection to the anti-life and an extremely powerful spirit-being.

Meanwhile back on New Genesis, Headmaster Himon is approached with information that The infinity Man has been seen, and we learn that not only is he trying to cover that information up, but he is engineering the deaths of the Forever People. The comic ends with a bang… literally… when a the mother box that the Forever People were going to use explodes, taking an entire house with it.

I have been a little disappointed with the artwork in this series before, but it has been getting progressively better each issue. While other comics don’t take it seriously, the backgrounds are thought through and detailed. With a few exceptions the character design and shading is also well done. The end result is comic that is engaging, and leaves you wanting more.

The story line is also fun and wonky. There are a lot of things that still need to be explained and I can’t wait for a few more reveals, but I absolutely loved the Mantis story line. It is always a risk to re-imagine a character’s back story, but the fact that the back story of Mantis gives depth to the plot was fantastic. I also liked that the plot set up future stories about sinister politics and backhandedness on New Genesis. I think this comic is moving in a very interesting direction.

Overall the artwork in this comic was pretty good with a few exceptions. The anatomy of the necks and lower faces on some of the characters were way off, so that the haracters either looked hyper distended or squished which was a little distracting. The shading in the face of some of the characters were also off in some places, taking away from the realism of the scene and distracting you from the story.

This might come later on, but I was really hoping for a few more details about some of the supporting characters. The only people it focused on was Dreamer, Mantis, Headmaster Himon, and to a small degree the Infinity Man. I know that there isn’t time for everything, but the series has told you almost nothing about the rest of the team like Big Bear or Serifan.

I really enjoyed this comic. With a few exceptions it was well drawn and the story was well crafted. I would like to have seen a little more detail on some of the supporting characters, but there was enough happening to keep me interested. This has been my favourite issue so far, and I look forward to seeing where it goes.