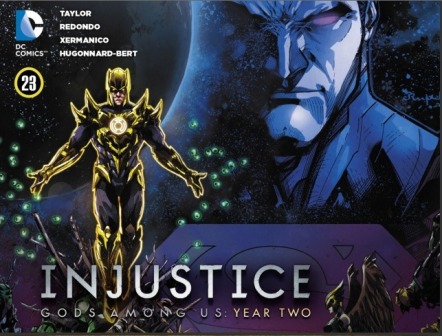 With the new installment of INJUSTICE out this week, sides are changing and the line between good vs bad is now blurred. Heroes are forgetting who they really are as Superman and Hal Jordon embrace the real fear inside themselves.

It’s a Green and Yellow brawl in this issue with the tables turning on the Corps now golden boy Hal Jordon. Much to my surprise, I really loved Sinestro and the charm that just oozed off his character. Tom Taylor seems to have a real talent for writing a good villain and it is wonderfully displayed through Sinestro. The almost seductive text that he emits really amplifies just how real evil can sit behind well played words. He almost made me want to put on a yellow ring and join him. With each issue Tom Taylor engages the reader encouraging you to take up a side and really places you in the heart of the story.

You cannot mistake Xermanico bursts of bold colors that seep into the meticulous penciling of Rex Lokus. Their artwork in this issue is nothing short of flawless from the close up portrait panels of the emotive faces and the action sequences that come spiraling off the pages. Bruno Redondo has worked magic again with his superb paneling using almost all the negative space on the pages so that the readers enjoy as much of INJUSTICE as possible.  As much as a good story can make or break a comic, I think the artwork in INJUSTICE really does hit a whole new bench mark of excellence and as the Corps battle it out across the sky. The team behind this comic captures each fluid moment with immense care and passion.

I can believe I’m saying this, but Sinestro stole my attention this entire issue. He was perfectly executed and I loved the sly malice that comes from the Yellow Lanterns. Both Hal and Superman have swiftly embraced their fearful nature and the subtle intense violence that has welled up inside is finally let lose. As much as I am a hero girl all the way, sometimes it’s hard not to root for the bad guys when they are written so well. These characters are really defining a new place from the original stories that they came from and that’s why INJUSTICE gets better and better each week. It’s something fresh, exciting and when you see Hal Jordan rip Guys arm off, deep down, you knew he had it coming.

Superman isn’t the most consistent of characters. It been a roller coaster of emotions from the hero and that is evident in the issue. I feel he’s also missing a real intent and purpose becoming just someone’s muscle headed puppet. As much as he is the weight to a team, I feel that his character is falling into traps he should have seen coming. Canary’s secret recording didn’t seem to faze the hero as he mercilessly went after the Green Lanterns. Did the ring suddenly switch of his thought processors? To me, he just became another bull in a china shop, just good for smashing people out of the way.

INJUSTICE continues to rain down in explosive force as this fight is far from over. With tables turned, it will be a test both strength power and wit to succeed with claiming the prize of Earth. I guess we will have to wait and see what is stronger at the end of the day, brains or brawn.