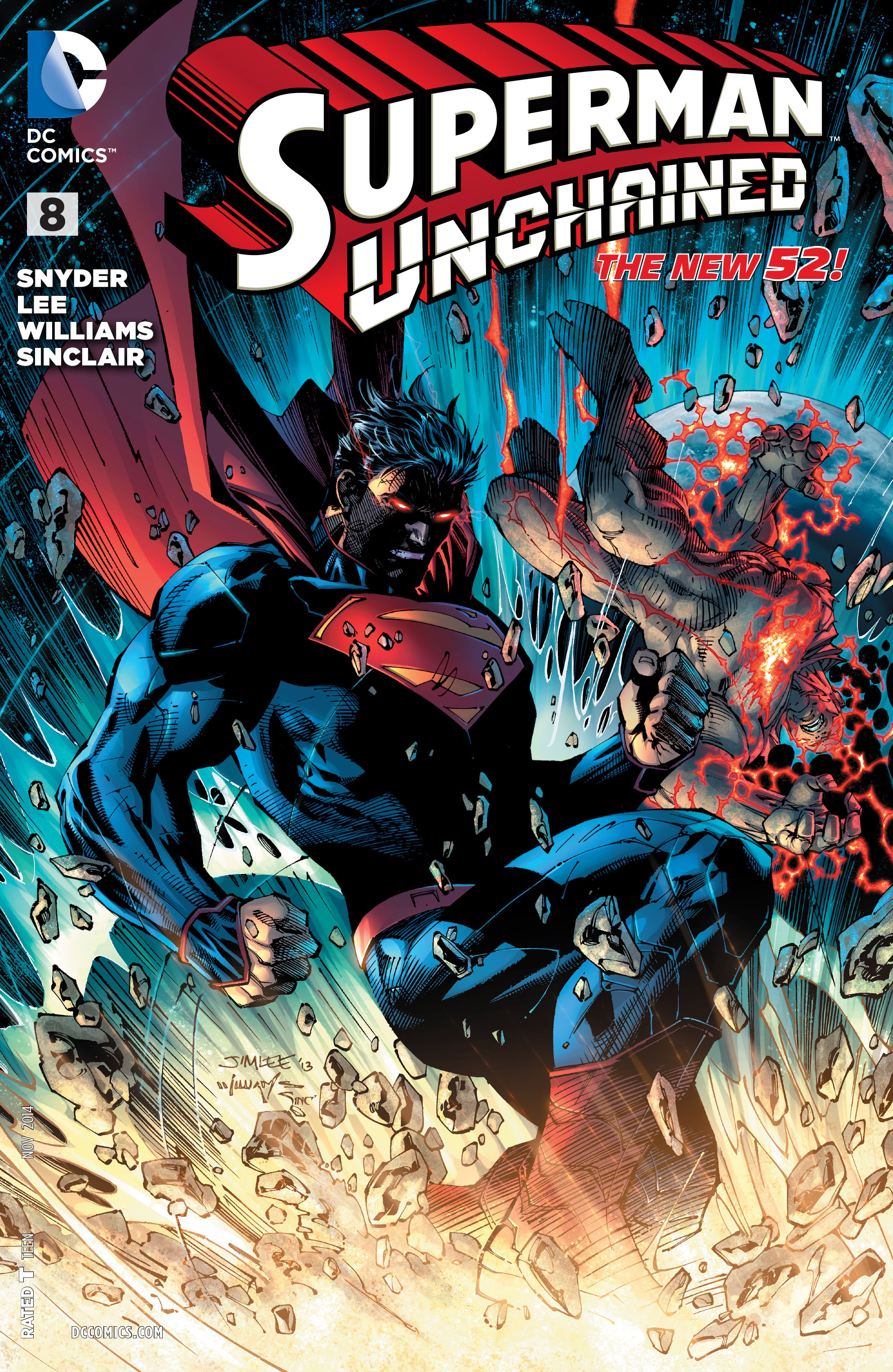 (Spoilers: skip this paragraph if you don’t want me to ruin this issue’s plot) This week we finally get to see the long awaited battle between Superman and Wraith. After a few issues of Superman being kicked around by earth’s various anti-Superman forces, Wraith unleashes his true power, and Superman learns that he has to start fighting smarter not harder if he is going to survive. The battle takes Superman and Wraith to the center of the earth where Superman finally manages to neutralize Wraith’s power, and bring him down. Jimmy Olson then appears with a shocking message from Lex Luthor. We learn that Wraith was just a herald for a much larger invasion force that Superman can only stop by sacrificing himself as a human bomb.

DC really seems to put a lot of work into their main properties. Jim Lee and Scott Williams’ art has been consistently impressive throughout the series and Superman Unchained #8 is no exception. The coloring is dynamic and the shading is spot on. One of the major issues with many comics is that they either ignore the potential of the background to draw you into a story, or they focus to heavily on the background without compensating with bold or at least vastly different colours in the foreground. This makes the frame appear muddy and takes away from the look of a scene overall. This comic strikes a nice balance, creating strong, detailed backgrounds but making bold color choices in the foreground that make the characters in the frame pop.

Superman’s inner monologue was also really cool. I know monologues drive some people crazy, but the fact that we got to see how Superman used strategies he learned from Batman, Wonder Woman, and Lois Lane really added to this scene. It turned what could have been a generic fight into a thought out battle plan, and added significant drama to the comic. These types of monologues have been used throughout this entire series but in this issue they really nailed it.

The overall story of this issue was great. It reminded me of my favourite Superman story, the Death of Superman (1992) where Superman gets killed by Doomsday. Watching Superman win fights against weaker foes who just happen to have Kryptonite, is never as fun as watching him go all out against foes that make him look puny by comparison.

(spoiler) A good comic always ends with a cliffhanger and this comic was no exception. The issue ended with a big reveal of Lex Luthor’s plan and great setup for next issue.

Just a warning, I really enjoyed this issue so these are mostly nitpicky.

The beginning of this issue drops you halfway through a fight between Superman and Wraith that somehow moved from the Batcave to the Gobi Desert. One of my pet peeves is when comics leave you on a cliffhanger, and then don’t fully address what happened in the next issue. Where was Batman in this Issue? What happened to Wonder Woman? Batman might have had trouble keeping up with Superman with his cave destroyed, but Wonder Woman certainly would have stuck around.

Earlier I referenced Death Of Superman. That comic was great, not just because Superman was killed, but because towards the end Superman got desperate. When he went all out you really believed it. He looked like a battered boxer going a last few rounds in a desperate attempt to take down his opponent.

By comparison, in the last few moments before Superman found an edge over Wraith, Superman looked pretty cool and collected, and even the injuries he sustained earlier in the fight somehow vanished. These, primarily design choices, took away from the drama of the scene and were really a missed opportunity.

There was also some anatomical issues during the grappling scene. It somehow didn’t really interfere with the action, but the placement of the arms or the neck in some of these frames don’t make any sense.

Overall this was a very successful comic. There were a few lost opportunities and some minor design errors but overall both the art and the storytelling exceeded the already high standards of Superman Unchained. I would definitely pick it up and give it a read through.