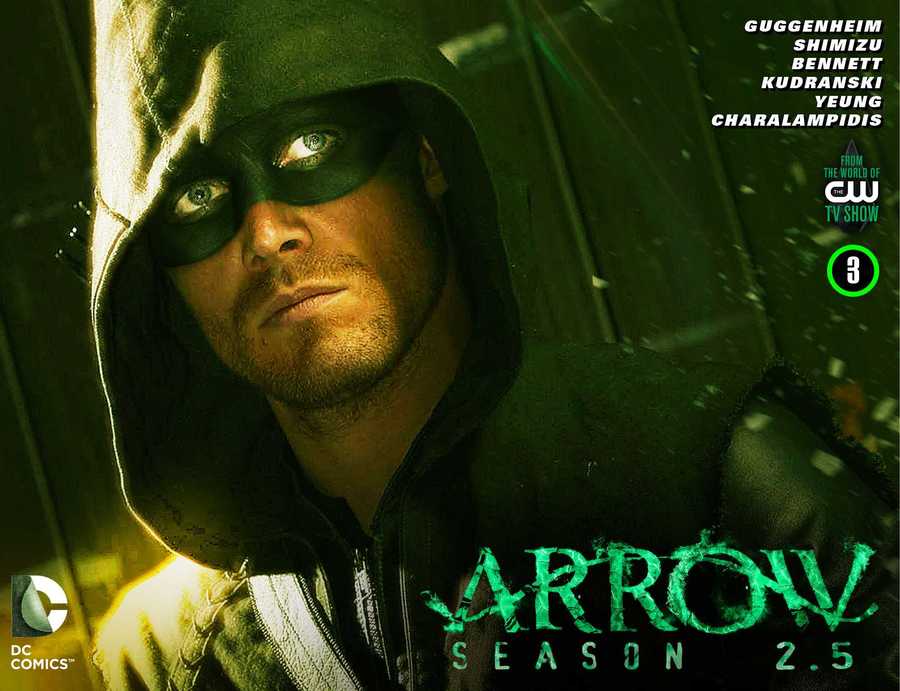 This week on Arrow Season 2.5, Diggle goes to pick up some new arrows and passes on the design for Roy’s new suit.  Ollie and Felicity do a bit

of discussing Roy’s condition as a member of the Church of Blood tries to make a show of his devotion.  A still-injured Ollie goes to take him down on the rooftop.  Meanwhile, Brother Blood’s identity is revealed and a situation is brewing in Khandaq.

This issue reveals not only who makes all of the fancy trick arrows (hint: it is not actually Ollie), but also reveals who actually made the original Arrow suit and is making Arsenal’s suit.

The building the Blood Acolyte takes a hostage on is named Winick Tower, certainly named for Judd Winick, who wrote Green Arrow for over two years.

For those of you who don’t recognize the new Brother Blood, aka Clinton Hogue, he was the businessman in Season 2 who basically instigated the much-loved by fans line “B**** with Wi-Fi.”

The further along we get, the more the portrayal of the characters seems to settle in to where we expect them to be, and we feel much more at home with our cast.  Our storylines this go-round blend together far better than before, so this issue feels much less jumpy.  I have to include Lodai in here as well.  Not only is he fairly interesting and fun to read, but he also provides the much appreciated addition of explaining all the trick arrows and suit upgrades our Emerald Archer uses.

It still feels like we’re just laying groundwork here, and three issues in things do need to start picking up.  With us only getting the equivalent of ten pages every two weeks, things need to keep moving at a decent pace.  In this issue, the Brother Blood reveal just feels needlessly drawn out, which shows itself even more when we get to the Suicide Squad backup.  10 pages (or 20 half pages) is not a lot of space to work your main story so cutting that down to add a backup feature is risky business.  This time, the Squad’s backup feature feels like a little more of a waste than a tease, but we’ll see how it gets handled in future installments.

The Verdict
Arrow Season 2.5 is doing a great job of settling into its character dynamics and filling in some gaps in the world of Arrow.  Even though it feels like we’re just spinning our wheels waiting for the real story to start, the team does manage to make our time in neutral fairly enjoyable.