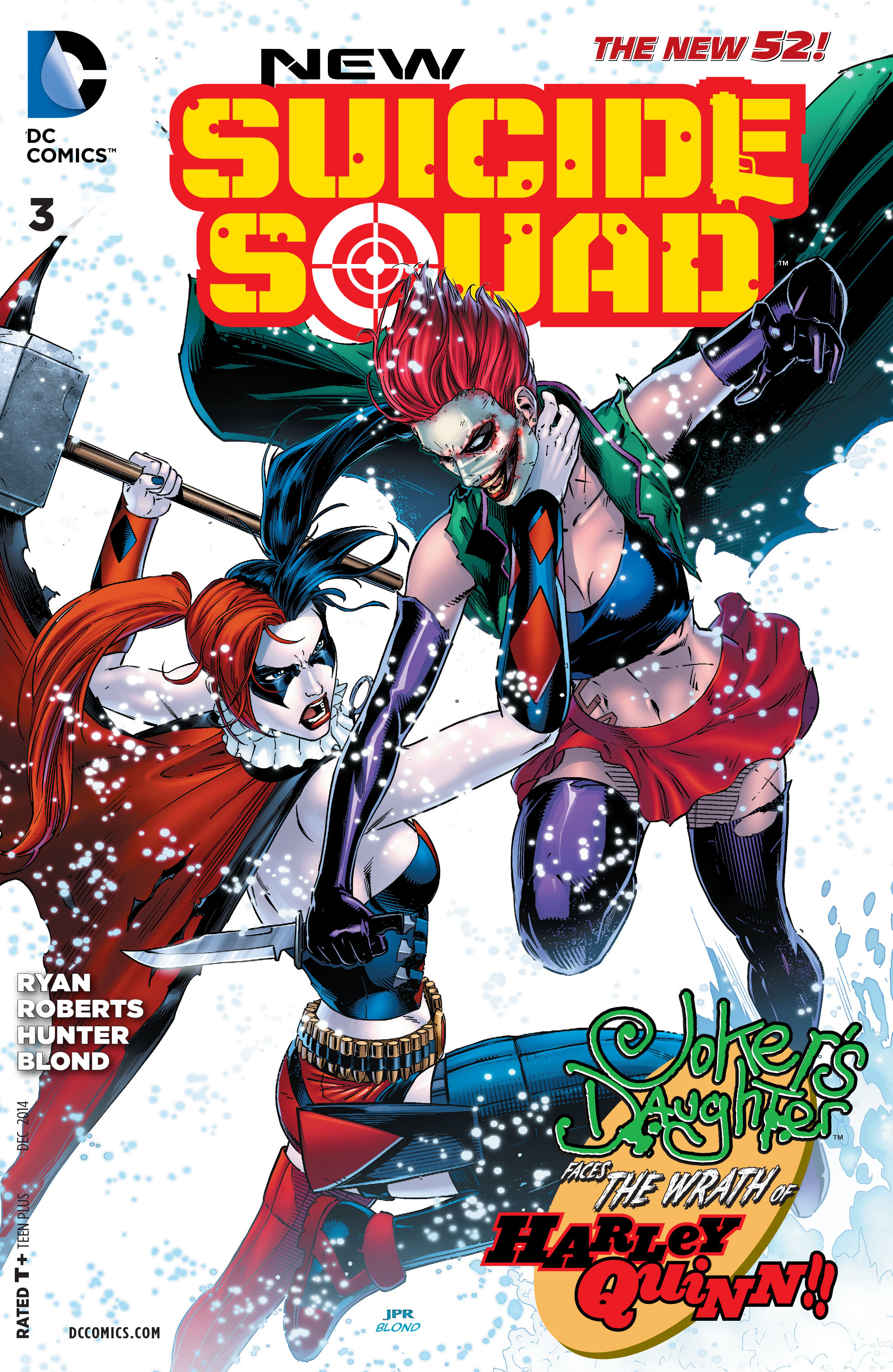 In SUICIDE SQUAD #03 the Suicide Squad’s mission to get intel on the Russian’s secret project is going badly. The squad was trounced in SUICIDE SQUAD #02 and this issue focuses on a beaten up, pissed off Joker’s Daughter and Harley Quinn duking it out. Meanwhile Amanda Waller argues with Vic Sage to keep him from scrapping the mission and blowing Deadshot’s head off.

In SUICIDE SQUAD #03 the remainder of the Suicide Squad holes up to lick its wounds after taking a beating from the Russians. However, when you put two psychopaths in a room together everything pretty much goes to hell. Black Manta ends up trying unsuccessfully to break up a fight between Joker’s Daughter and Harley Quinn. Joker’s Daughter is soon incapacitated leaving Black Manta and Harley Quinn to rescue Deadshot alone. Meanwhile Amanda Waller argues with her superior Vic Sage who wants to just blow Deadshot’s head off remotely and scrap the whole mission. Ultimately Amanda Waller reveals that she’s the only one who has the authority to activate the charges in Deadshot’s head and the argument ends. SUICIDE SQUAD #03 ends with the reveal that Deadshot is in fact still alive and is being tortured, and Deathstroke has agreed to work for the Russians.

OK, I have to be honest here. SUICIDE SQUAD #03 was a bit of a filler issue. There were some minor plot points revealed but nothing groundbreaking occurred. However I still LOVED this issue. I really enjoyed watching Harley kick the hell out of Joker’s Daughter. I love it when fights are impactful, and I give them even more points for the fact that this fight was pretty peripheral to the SUICIDE SQUAD storyline. Humor is one of the things that makes the SUICIDE SQUAD series great. Harley beating on JD while delivering a valuable life lesson is perfect for SUICIDE SQUAD’S brand of brutal comedy. The final line “I’m helping her.” “I’m a psychiatrist.” was just icing on the cake. Harley Quinn was also venting a bit of the rage that she still feels towards Joker. I don’t think that relationship is over though. You know what they say, “You can only hate someone whom you have the capacity to love.”

Aside from a few exceptions (see below) this issue was artistically excellent. DC took the SUICIDE SQUAD title seriously enough to make a movie of it, and they really put a lot of work into making it look great. Harley looks really sexy and, for the most part, well designed, and Joker’s Daughter looks terrifying in her Joker mask. Artist Rob Hunter was true to the style of Death of the Family and put a lot of detail into the way that Jokers face was attached to JD’s.

Even the best filler issues are still just filler. There were basically 3 plot points in this issue. Here is why we shouldn’t care about them:

1- Waller is at odds with her supervisors but ultimately, she has the power to make the final decisions about the Suicide Squad.

2- Deadshot is alive and has been captured by the Russians.

We aren’t far enough into this series to be emotionally invested in Deadshot yet. I didn’t have any strong feelings when I thought he was going to die so it wasn’t a shocker when we found out he was still alive.

We all saw this coming right? Why wouldn’t he? He is just in the Suicide Squad to get out of jail time. Why wouldn’t he take a better deal from the Russians?

The character design in SUICIDE SQUAD #03 was weirdly inconsistent. Most of the time it was pretty good but some of the renderings of Harley Quinn made her look like a walking blob. (bottom left frame)

Or just had her arms flopping around randomly and out of proportion.

Finally, this is an issue I have with the whole SUICIDE SQUAD series, not just SUICIDE SQUAD #03. Amanda Waller is pretty much the only important character in DC who is less then superhumanly attractive. The fact that she was a little overweight is what gave her some of her commanding presence. It was a real shame that DC decided to turn her into a supermodel in the SUICIDE SQUAD series.

“Filler issue” can have bad connotations, but I really enjoyed SUICIDE SQUAD #03. There was a great fight scene and the art was pretty good. I also got a kick out of a stressed out Manta trying to separate Joker’s Daughter and Harley Quinn.