Review- INJUSTICE GODS AMONG US: YEAR 3 #3 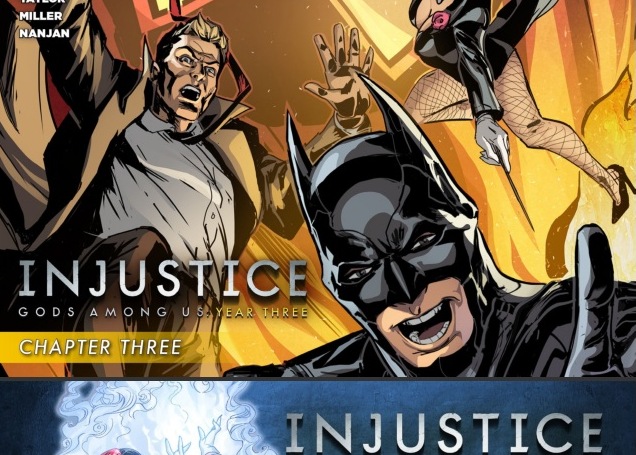 With Batman finally using the ace up his sleeve, this week’s Injustice is a gathering of Batman’s forces. With talks of their next move, the Gotham team has now grown with a few more characters wanting to help against Superman.

Tom Taylor is continuing the magical theme with the supernatural characters meeting with Batman to discuss his strategy. Favoring short dialogue in this issue, he wants to make his point and get it across as quickly as possible. We are getting down to the heavy side of the plan as he exposes one of Superman’s few weaknesses. It is definitely a game changer but as usual Injustice wouldn’t be the series it is without twist after twist. Even in the short issue, events can change in the space of a panel which I think really keeps the readers so hooked.

Mike S. Miller pushes is artists talents out as the artist for the issue. Drawing the giant panels with character splash pages and close ups, his artworks beauty speaks for itself. Matched with J. Nanjan amazing colorist skills, the pages really have such striking images that only compliment the characters underneath it all. Injustice has some of the most beautiful artwork of the DC series and both these men have lived up to expectation.

Artwork is always a giant positive and it has been getting bigger as Year 3 continues on. With huge panels, the artists have a little more freedom to really engage in all the characters that the series has and also filling the panels to the brim. I loved the fact that you can see so much of the costumes and the different shapes that Injustice offers. From Superman’s Yellow Lantern outfit to the almost tribal cowl Batman is sporting, I love see the way each artist adapts them with their own personal touch.

Another strange character added to the list of Injustice troop, I found the strange boy sitting on the floor a little unexplained. Having not read many of the supernatural characters, the boy was not explained nor named so I could reference him. It was like dropping Misfit from the Birds of Prey into a comic when the person hasn’t read the series. I hope that his appearance is explained as the comic continues and that he, like all of the characters, has his own purpose to Batman’s plan.

Now with a bigger supernatural threatening their doors Injustice loves throwing more curve balls towards us. Now that magic is unleashed, the story is only going to get more treacherous, so stay turned as Batman and his group face up against a giant force crushing down upon them.