Review- INJUSTICE GODS AMONG US: YEAR 3 #5 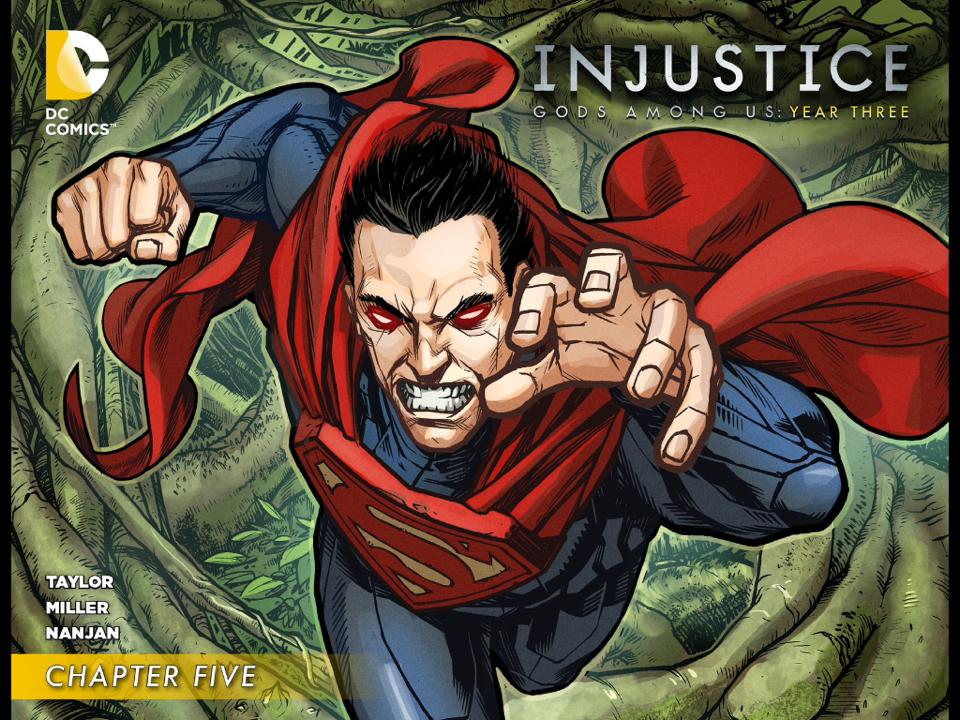 A rattled Superman comes back to the pages of this week’s Injustice issue. Superman tries to lead his new force to protect Earth as best he can while Batman and his magic wielders are desperately trying to save one of their own. But it’s the mystery forces that surround both sides that has everyone on edge.

It was a split volume this week as Tom Taylor manages to squeeze in glimpses of both battling parties. It was good to see the opposite sides of the spectrum almost paralleling each other in their word play. Once again Taylor delivers on Harley’s humor but I loved seeing the split personalities that seemed to be revealing themselves deep within Superman’s psyche. Also there was a subtle hint that Wonder Woman may finally be coming out of her coma and return to our pages.  I had been waiting for the last piece of the Trinity to return for so long now as it just isn’t a DC adventure without Wonder Woman’s commanding presence.

Mike S. Miller’s clear and crisp line work looks beautiful flowing throughout the large panels. Once more matched with J. Nanjan color work, the two deliver an array of characters with their extreme diverse color palettes. My favorite part about the artwork from these two artists is Dr. Fate’s gold armor. The shin and shimmer jumps right off the page along with the reflective surface that really makes the outfit stand apart as the magical objects they are. I also thought the characters soft facial features also brought a more human appearance especially to Superman which complements their powers not detracts.

I am just in love with Dr. Fate’s outfit in this issue. From the reflections of Constantine in the helmet to the gleaming color that just bounces of the page, he looked incredibly ethereal. I think the slight changes to the characters outfits in Injustice give this comic an entirely unique appearance which sets it apart once again from the original stories in DC. Tom Taylor’s scripting makes this issue complete jumping from Sinestro’s coy nature to Harley’s hilarious outburst. He seems to jump through the characters flawlessly and captures the essence of who they truly are even in the space of 2 lines.

Can I mention the Yellow Lantern symbol cod piece? I know that the symbol was placed to emulate a belt buckle but unfortunately because of the large amount of abs on Superman, the symbol ends up looking more like a crotch cover than a belt. I found it slightly odd and couldn’t help staring at it in most of the panels drawing my eye away from the rest of the artwork.

As a new threat looms on the horizon for both teams in Injustice, we are yet to see all team players reveal themselves in the grand plan of both sides. So stay tuned for another issue with more surprises just waiting to be uncovered around the next corner.