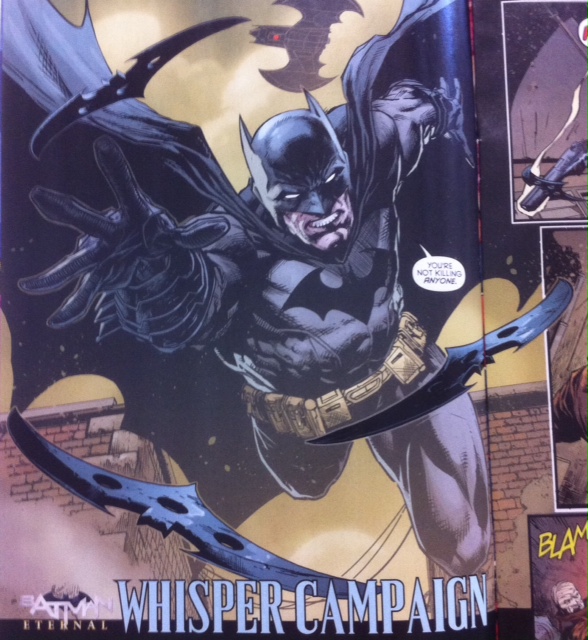 Batman Eternal keeps humming along. The pace that has picked up over the past few issues continues in this issue. Some of the other plot pieces that seem to have set up the new status quo in books like Catwoman or new books like Arkham Manor and the forthcoming Gotham by Midnight appear to be out of the way. In hindsight these elements may not have been integral to the main story, but right now it’s Batman vs. Hush as the main event.

Picking up from last issue, Batman arrives to stop Hush from killing Stephanie Brown. After a little grenade dodging Batman gets a taste of his own medicine as Steph slips away in perfect Bat-family fashion, leaving Batman feeling like Commissioner Gordon. Batman then heads back to Arkham to pull Batwing out of the rubble. He delivers Luke home and brings Alfred back to the cave for a reunion with Julia.

Meanwhile, Hush meets with Jason Bard to put the next phase of his plan into operation. Back at the Batcave, Bruce and Julia have discovered a major security breach. Apparently, Batman has a number of weapons caches all around the city underground…oops! That’s correct. Hush had broken into the cave the last time the database with the locations had been accessed…. Jason Bard visits Vicki Vale to share the information given to him by Hush that Wayne Enterprises has built all these weapons bunkers underneath the city. The issue ends unsurprisingly with Hush exploding a weapons cache, as Batman again is too late to stop him.

Jason Fabok’s art is a welcome addition to this issue. He draws a powerful Batman and makes all the characters look good. The main storyline is charging ahead now and has dropped the peripheral side plots. There’s a lot of intensity here that gives the story a high sense of drama. Hush’s newest attack against Batman threatens both the Bat and Bruce Wayne.

How long has it been since we’ve seen Gordon? Isn’t he still in jail? The scope of this story does have its drawbacks. And this is one of them. It’s not easy to keep all of the side plots moving at the same pace. It’s only a problem when one realizes that it’s missing.

Great issue this month. Hush has upped the ante on Batman and it’s clearly going to take a supreme effort to not only save the city, but save his reputation as both Batman and Bruce Wayne. As long as the side plots are able to wrap up or dovetail into the main plot, this will continue to be a great read. 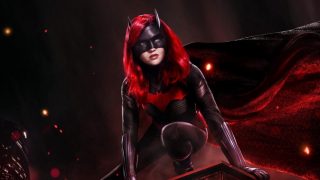