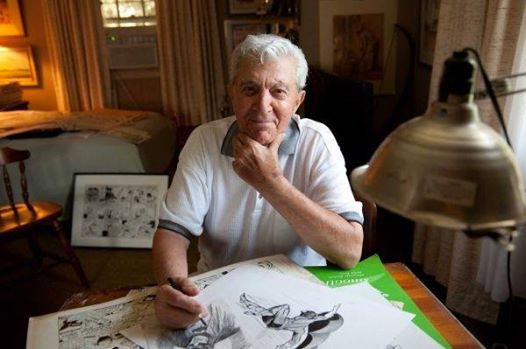 Alfred John Plastino was born, December 15, 1921 at Saint Vincent’s Catholic Medical Center in Manhattan, New York City. Al was raised in the Bronx and was interested in art since grade school. He attended the School of Industrial Art in New York City and was accepted into Cooper Union college, but chose to continue to work as a freelance artist. His earliest known credited comic book work appeared in Dynamic Comics #2 (Dec 1941). Before World War II Al worked as an inker for a couple of issues of Captain America under Joe Simon. Al has credits as a writer, penciller, inker, colourist, letterer and editor.

On learning to draw, Al had this to say:

“ I used to go to the Metropolitan Museum in NYC — Dad would drop me off. I copied Renoir, Monet, Rembrandt, Raphael, Michaelangelo, all the masters.”

Plastino’s father was the one who encouraged him to follow his dreams to become an artist. Al’s father was THE hatter of Manhattan! He made hats for Mayor La Guardia, various New York Governor’s and President Lyndon B. Johnson. The last hats he made were for President John F. Kennedy and his wife, Jacqueline.

During World War II Plastino was drafted, along with his brothers, he served in the U.S. Army. Al was building a model airplane from his own sketches, plans and scrap balsa wood.   The army became interested, fast. “They looked at it, they liked it,” he recalled. They liked it so much, in fact, that they gave him an extension and sent him to Grumman Aerospace Corp., the National Inventor’s council and then to the Pentagon in Washington D.C. He was also assigned to the Adjunct General’s office (AGO) where he began drawing and painting posters for the war. After being discharged Al went to work at Steinberg’s Studios in New York and did drawings for the army training manuals.

While working in the studio in New York City he learned from Steinberg that DC Comics was looking for an illustrator to do Superman. In 1948, Plastino showed sample art of Superman to the editors of DC Comics, which offered him work at $35 a page. Plastino, who had heard that Superman artists were receiving $55 a page, negotiated a $50 rate.  This started a twenty year career on the Superman family of books. Early on at DC Plastino was required to copy Wayne Boring’s style but gradually started mixing in his own style.

The Legion of Superheroes

In 1949, Plastino and Batman Co-creator Bill Finger introduced a story in Superman #61 in which kryptonite, which had originated on the The Adventures of Superman radio program made its debut. In the story “Superman Returns to Krypton” con man Dan Rivers who operated under the alias Swami Riva, became the first criminal to use Kryptonite against Superman. The iconic green Kryptonite would come back to trouble The Man of Steel for decades to come, appearing again in comics, movies, cartoons, and video games.

Plastino drew the Lois Lane feature in Showcase #9 (Aug. 1957) which was so popular it lead to the character receiving her own series.

While teamed-up with former Captain Marvel (Shazam) scribe Otto Binder, Al added to the Superman mythos in another big way. It was during this time Binder and Plastino introduced the Legion of Superheroes in Adventure Comics #247 (1958) , a teen superhero team from the future that eventually became one of DC’s most popular features. Otto Binder and Al Plastino co-created the first Legion characters: Cosmic Boy, Lightning Lad (as Lightning Boy) and Saturn Girl.

Binder and Plastino debuted the villain Brainiac and the Bottled City of Kandor in Action Comics #242 (1958). Brainiac and the concept of “bottled worlds” will be the featured concept in 2015’s company wide crossover event “Convergence”. The Lego Batman 3 video game also makes use of Brainiac and the “bottled cities” concept.

Binder and Plastino co-created Supergirl in Action Comics #252 (May 1959). Though other “Supergirls” had appeared before, it was this version that resonated with readers. Thousands of positive letters poured into the offices of DC Comics after her debut. Supergirl has appeared in animation, movies, video games, and her own self titled comic. A Supergirl TV series is currently in production at CBS.

His work on Batman with Robin the Boy Wonder syndicated strip came about from a request by writer/editor Whitney Ellsworth. “People that created strips didn’t necessarily draw them,” Plastino related. Even though Bob Kane was the creator, Ellsworth knew Plastino was an artist who could really make the stories come to life. (Al would go on to draw the strip for Ledger Syndicate through the 70’s). Al was the first to put his name on the syndicated Batman strip instead of just signing as “Bob Kane” as was required by previous artists.

Mort Weisinger was not remembered favorably by artists that worked under him at DC Comics.  Al had this to say when asked about his relationship with Weisinger during an interview with The Silver Age Sage.

Now Weisinger, I got along with him because I straightened him out a long time ago. Because when the poor bums that created Superman, was in his office one time and doing some writing for him, and he talked to them like they were dirt. So when they left, I just said, “Mort, if that was me, and you spoke to me the way you spoke to [Joe] Shuster and [Jerry] Siegel, How the hell do you get the nerve to talk to him that way? Who the hell do you think you are?”  I laced into him. I said, “If it was me, I would have not only punched you in the jaw,”……… we got along fine after that.

Other than his comic legacy Al Plastino also had an impressive career as a strip artist, including:

When asked about his ability to imitate other artists Plastino had this to say:

“ I was able to do any one style, I could copy anyone. It goes back to my basic drawing and painting at the museum”.

Don’t forget to come back for part 2!