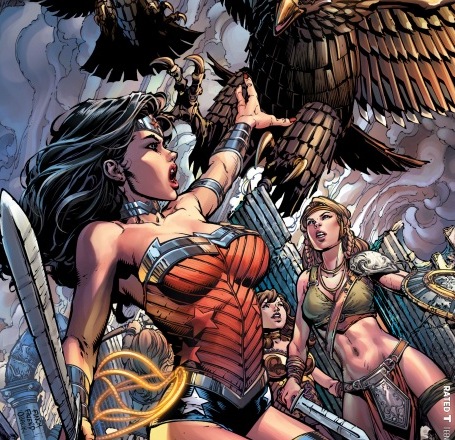 Crazy, epic, amazingness from Wonder Woman as the Amazon Queen fights with everything everyone. Pinned at all sides, she now faces the difficult tasks of deciding where her life choices lie and what she must protect.

Meredith Finch has done it again! This scripting is just amazing as she dives into the emotional side of Diana. With so many things now crumbling around the Amazon, she really sheds a realistic light on just how much a superhero has to deal with. It’s a completely different side to the character and I think that Finch is giving her all into making Diana the powerhouse she always has been. The feministic tone is still so strong, really influencing the entire storyline. She is definitely not a weak woman even when faced with impossible odds, she stands tall and does what is best for everyone putting her own issues aside.

David Finch’s work just blows me away with every panel I had to read the issue twice. Sonia Oback and Richard Finch give a beautiful base for these three artists to emote the ethereal character to her fullest. I love everything from the backgrounds to the facial details and ever the glinting of the armor catches my eyes and shows you how talented these people really are.

I always come back to it but the artwork in the new Wonder Woman rocks. It is so full of depth and beauty that I want to frame every panel on my wall as a masterpiece. It just shows you that with the right people on the project you can make even fictional gods come to life. Also the dialogue that Diana has is not only strong but still graceful as her words pour out her feelings with each page. It was a beautiful read and inspires anyone to be true to themselves.

The only thing was the jump between the eagles and Superman. If it had started with them training then jumped to the fight it would have had a little more flow to the entire story-line.

Wonder Woman continues her plight between her home and the world of man. She is caught in the middle between all the forces of those she wishes to love and protect. Stay tuned to see what fate the Amazon Queen decides on and if she will survive the decision.