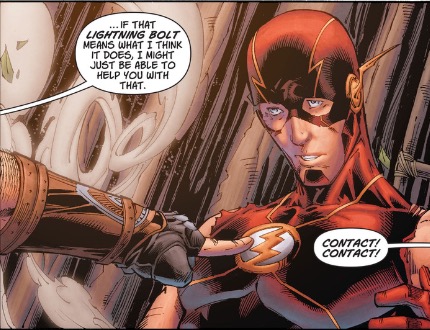 Barry is sure in a pickle, trapped in the Speed Force while his life is being lived by an evil doppelgänger. This is a different Speed Force than we’ve previously seen and Barry acknowledges this. The Speed Force is inhabited by people from different times that have been snatched and unable to return. There are people from the distant past as well as the far future here. It’s a low tech place where everyone is roughing it. Dinosaurs, apes etc…fill out the background, as well as some mythological looking avians. On top of that, Flash has lost his powers. However, Selkirk, his guide here, has an idea about fixing that upon seeing the lightning bolt symbol on his chest. As the issue opens, Selkirk takes him to the Outpost, a human settlement in this part of the Speed Force.

Meanwhile, back in Central City, Iris is spearheading a journalistic investigation into a city cover up. How about a cache of dead bodies? Plus, Patty is starting to notice some differences in ‘Barry,’ and the coroner has a body with a ‘pureed’ heart that Patty compares to one of Daniel West’s victims.

Back in the Speed Force, Barry helps defend the Outpost from a band of raiders, without his speed powers he has to rely on a flintlock pistol with two shots. Barry makes good and Selkirk reveals his plan to get Barry struck by lightning to jumpstart his powers. With one more jump back to Central City we get a couple pages of a new villain with something against cell phones… Lots of ideas in this issue. There’s a lot going on in the world of the Flash. The Speed Force as presented here gives Barry a different environment from either Central City or some future time, both of which are classic Flash settings. The subplots present some interesting problems for Barry when he returns.

Not a whole lot of character bits, and the issue seems disjointed with so much going on between Central City and the Speed Force. Not a whole lot happened, despite all the ideas touched on. It almost seems like there are enough plots for two titles crammed into this issue.

I’d like to see Flash get back home and sort out the messes in Central City, but nothing made me care too much in this issue about the characters. If you’re reading the Flash you won’t want to miss this, but it’s not a jumping on point. Too many ideas make this a muddled issue and it doesn’t progress very far, if at all.  3 Daily Planets might be generous.