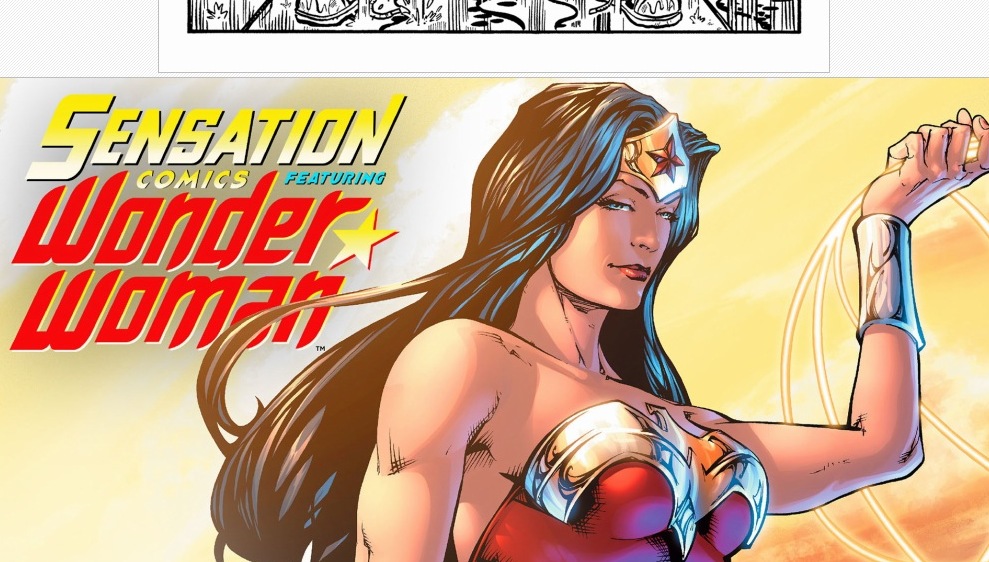 Another double feature for Sensation Comics as Wonder Woman ventures into space! She must help a team scientists open a new colony for the people of earth but it’s not as simple as it seems.

I knew it!! Someone was bound to have a space story with week and Alex De Campi delivers. The story itself is an interesting adventure with some hilariously cheeky moments which is a nice break from the serious drama issues of this series. With the addition of some crazy new costumes, Diana keeps up her strong feminism in the face of a chauvinistic scientist. It great to see her referencing pop culture as it gives the reader a sense that Wonder Woman is alive and active in our present time. This is a nice touch and really links our social media obsessed generation into the story.

Neil Googe and Len O’Grady are the team on this week’s issue giving some new outfits to our classic Americana superhero. They have thrown out bright colors and spectacular splash pages with huge panels dedicated to full body shot of all the characters in the issue. It’s very eye catching and the steely sliver is a great contrast for the highly colorful superhero.

Loved the colors, something about a bright comic always catches my eye. Though the space suit was rather odd, I can’t help but love some shinny armor. It looks fantastic on Wonder Woman and really gives her that fighter spirit. I also thought the dialogue for this issue was really well balanced. It was witty and serious all in one and gave good action moments along with social media references. It was just a clever beginning to this new story.

I had a few surprisingly with his issue; the first is that some of the larger panels for this story have lost details. The faces, though in the distance, have been skewed and distorted and look pretty much like stick figure eyes and mouths. There is a little to no detail and doesn’t balance against the close up panels. Secondly, the first outfit Wonder Woman appears in is slightly a mismatch. I understand and respect that being in another country she tries to blend in with the culture but coming from the last issue where she did not have to wear the traditional garb, now all of a sudden she is conscience about it. If it were the traditional clothes she would have had her arms covered as well so the whole outfit is just confusing and feels out of place despite the fact that she explains she wanted to try new costumes. You don’t see Superman going to India and suddenly wearing a turban. I’m not sure if the writer is of a religious background or is trying to place the headdress in a positive light for readers of our present time but it feels like this topic is getting a little forced now.

Sensations Comics brings us in the unknown frontier as Diana must now figure out what is happening to the new space station and how to save the crew members around it. Stay tuned to see what happens to Wonder Woman as part two concludes this space odyssey.