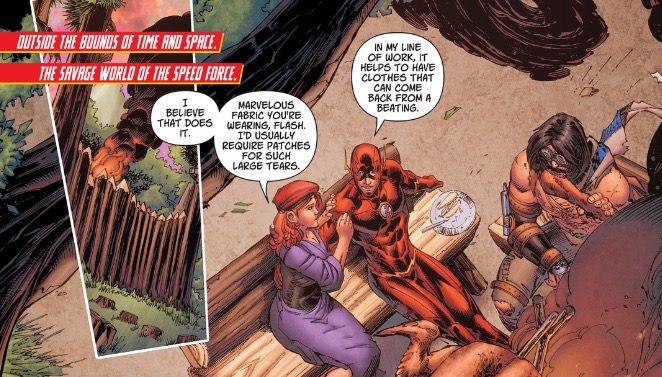 Patty has to have figured it out. There’s no other explanation for her behavior at the end of this issue. We saw in the previous issue that she knows something’s not right, but she has to have figured it out now, but it’s happened off panel. What does happen on panel in this issue is another mixed bag. Barry does absolutely nothing in the Speed Force except get a history lesson on Selkirk’s life. Selkirk was a student at Oxford who had a theory about all the speedster myths in various cultures. This leads him across the globe in search of more detailed accounts and ends up getting pulled into the Speed Force himself.

Back in Central City, Patty and future Barry are doing the autopsies on the bodies discovered last issue. He determines that one of them is “Overload’s first kill,” Overload presumably being the mystery man introduced at the end of issue #37. Nothing really develops here as future Barry, Patty, and Iris (who’s just joined the party) get an alert of a robbery by Mirror Master. Not alone, MM has a wanna be Rogue in tow on a try-out mission- Napalm. This fellow is too violent for MM’s taste, but he ends up being more surprised as future Flash deals out an amputating attack on Napalm as the two Rogues attempt an escape into one of MM’s mirrors. At the office, Patty gets the call to the scene and is told of the violent events of the attack. Future Flash has already made it back and passes Patty as she heads out the door, and says nothing to him. Well, nothing revealing. She’s got to know.

This is hard. Selkirk’s Indiana Jones-ish flashback is the most enjoyable part of this issue.

The story is very jumbled and just when it seems like something is about to happen, an action sequence slows things down and sets things off in a different direction. There’s way too many subplots going on. Flash in the Speed Force. Future Barry living Barry’s life. The bodies. Iris’s next news story. The new Overload villain. Selkirk’s history lesson. There’s so much it’s hard to really become invested in what’s going on. The creative team is not spending enough time on any subplot to get the reader invested.

Pass on this. I now don’t care if Barry gets out of the Speed Force. I don’t frankly care about anything going on in the book. If you’ve got to know what happens it might be more satisfying to read a recap after the story arc ends.