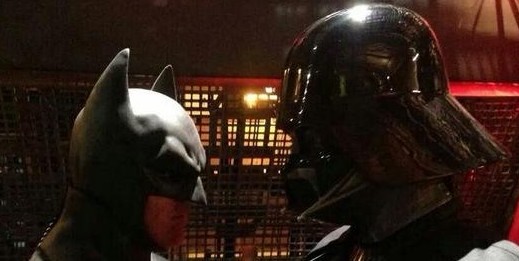 Bat in the Sun has released an alternate ending to their Batman vs Darth Vader short film!

Batman vs Darth Vader is the latest in the Super Power Beat Down series produced by Bat in the Sun Productions. A production company co-founded by Aaron Schoenke and his father Sean Schoenke that specializes in “fan-films.” Aaron began creating his films while still a film student at The Art Institute of California in Los Angeles. His first film Batman Beyond: Year One was released in 2003, production began in 2001 and at 38 minutes is his longest film to date. Aaron began filming when he was just 16 years old and played the role of Terry McGuiness himself. Dark Justice Schoenke’s next film was released the following year and starred Tanoai Reed as the Dark Knight. Schoenke’s third film Patient J was his most successful of the three and was released in 2005. The film took 15 months to complete and featured Schoenke’s origin of the Joker, the death of Jason Todd (Robin II) and is known for featuring Batman in his original classic Bill Finger designed suit. Schoenke’s next film Batman Legends was released in 2006. After some time away to work on other projects, Schoenke returned with City of Scars which was released in 2010 and was produced by Aaron and his father Sean. The film was created in a 16 month period using only 21 shooting days and was shot using high definition cameras and had a budget of $27,000. The film premiered on Dailymotion as a fund raising event. The film was released in June and by the end of that month had garnered over 300,000 views! A sequel was produced in 2011 entitled Seeds of Arkham. Schoenke is currently the director of Super Power Beat Down, a web series that pits fictional characters against each other and asks the fans to vote for a winner, the series debuted in 2012.

You can watch the original ending below!

The next Super Power Beat Down, episode 16, will pit Nightwing against Marvel’s Winter Soldier. Voting ends on March 31st, to vote just click on the link here!