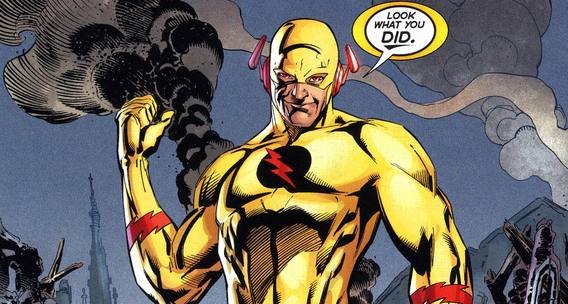 Flash-forward into disaster, as Professor Zoom returns to the DC Universe in this week’s The Flash #40.

This week a lot happened in the DC Comics Universe, but some great moments like the one we are going to talk about are just too huge to leave unnoticed. So we are spotlighting the return of a villain that disappeared from the pages of DC Comics since 2011 during the fan-favorite Flashpoint storyline: Professor Zoom.

Zoom, commonly known as Eobard Thawne in most of the storylines he appears, has been in the spotlight since his antagonistic role in Flashpoint and his live-action debut in The Flash series (portrayed by Tom Cavanagh).

The Flash Volume 4, which is the current volume of the Flash series during The New 52, has featured various speedsters already. We were even able to see a Reverse-Flash, though nothing like the ones we have seen before. Fans (myself included) began speculating that Daniel West, the current Reverse-Flash, was meant to be Barry’s arch-nemesis. Oh boy, how happy I became when I realized how wrong I was.

Because of the upcoming Convergence event, many series were set to wrap-up storylines in a rush. However, The Flash is the only comic series I personally felt that wrapped up the current storyline in a very natural way, as said storyline did have an impact on the Flash mythos in general, for months to come.

During the climatic ending of the Future Flash/Speed Force storyline in The Flash comics, the issue concluded with one page solely dedicated to tease us, showcasing the villain you love to hate and hate to love: Professor Zoom.

Many questions remain. Is Professor Zoom related to the current Reverse-Flash? Is he the comics version of Dr. Harrison Wells/Eobard Thawne, taking inspiration from The Flash TV show? Or is he the one and only Professor Zoom, somehow surviving his apparent ”death” during Flashpoint?

Go to your local comic shop and buy your copy of The Flash #40 before time runs out!