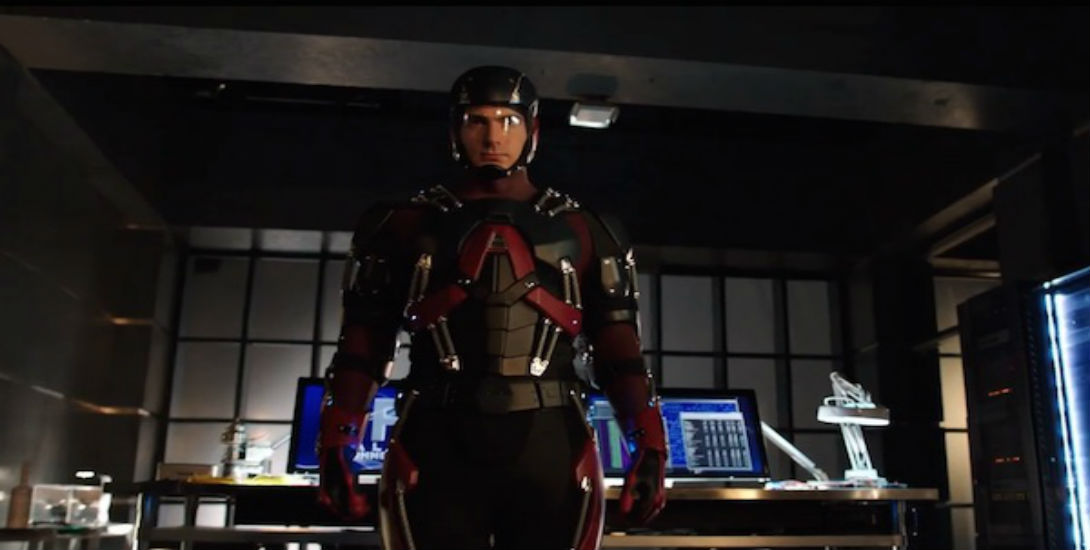 After the Atom/Ray Palmer (played by former Superman Brandon Routh) got into action officially on this past Wednesday’s episode of Arrow, artist Andy Poon got to see the supersuit up close and personal. Poon developed concept art for the show’s promotion. On his blog, Poon had this to say:

“This was probably one of the coolest and definitely proudest concept I’ve ever done. I was shocked when I first heard about the producers’ idea of an exosuit from costume designer Maya Mani. I literally paused and said ‘EXOSUIT ? for TV? Like EXO-Skeleton armor? Really?’ and the answer was ‘YES’. I was in joy of course. Not often you get to participate and help conceptualize in such ambitious design for a TV show, and it will have to be a functional practical suit that Brandon Routh will wear. I’m more familiar with the traditional spandex Atom suit from the comic and cartoon, and have only see a picture of 2 from some of the latest New 52 comic version where he has some sort of armor and helmet. I tried to emulate the feel of the traditional blue and red pattern as much as possible while keeping it still more on the grounded sci fi armor. I was so excited when I saw a little lighting test they did on a 3D printed 1/6 Maquette of the suit on Brandon. When they finally release the first photo of Brandon wearing the suit in full lighting, I had the biggest geek out moment screaming in studio to get all my coworker to check it out. Lots of amazing talents did lots of hard work into this suit, I’m glad that most people feel really positive about it. Either you like it or not as the ATOM, it is a pretty cool suit on an amazing actor. Stay tune, more cool stuff to come!”
To see more of the Atom, watch Arrow on Wednesday nights on the CW at 8:00pm EST.

Source: The Art of Andy Poon

Tags:Andy PoonarrowBrandon RouthBrandon Routh The AtomThe Atom
share on: FacebookTwitter Tumblr
previous article
Mark Hamill on the Trickster vs the Joker
next article
Becoming Batman on a $682 Million Budget