Next on The Flash: ”The Future Revealed” 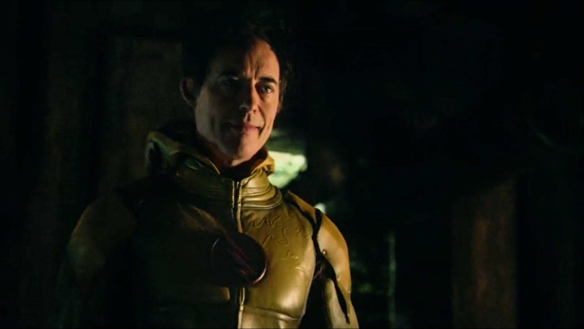 The CW Network has released an all-new promo for the remaining episodes of The Flash, showcasing major changes in the status quo of the show.

The endgame is here! Next week’s episode ”All-Star Team-Up” will feature various characters from both shows, including Ray Palmer and Felicity from Arrow and Iris, Eddie and Barry from The Flash on what appears to be a group date? To be honest…who cares? The Atom is coming to The Flash!

The extended trailer also hints at Grodd’s return, and shows some of the metahumans escaping from The Pipeline. Amongst those escapees is the Weather Wizard (played by the ”Bringer of Rain” Liam McIntyre) and The Mist.

Flashpoint-like timeline or not, it seems in some way or another, Barry gets face to face with the Reverse-Flash at last.

Take a look at the trailer below! – The Future is Revealed

Get ready for an all-star team up, more metas and Gorilla Grodd. The Flash returns with an all new episode Tuesday, April 14!