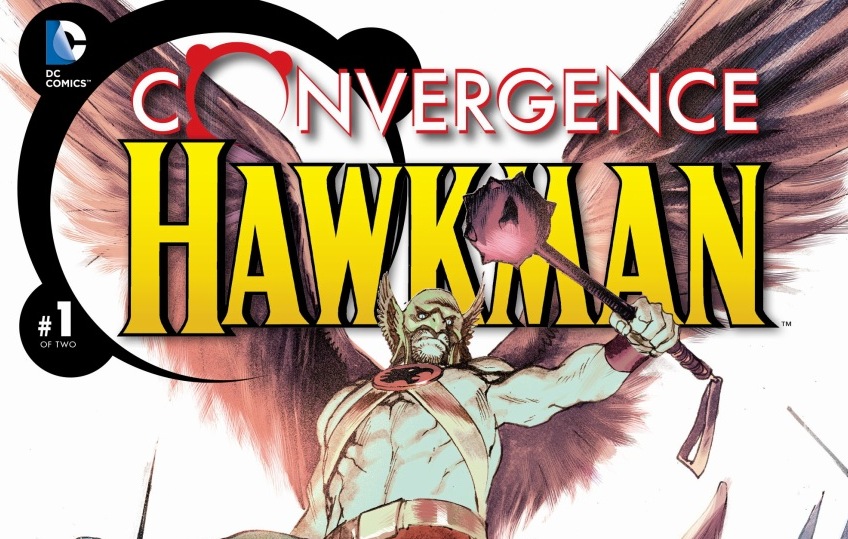 Hawkman Convergence defends Gotham territory as Hawkman and Hawkwoman try to serve as best they can since the dome went down.  But their investigations lead to disturbing discoveries as the two find out that the dome is connected to their ancient world.

Jeff Parker has taken readers into the world under the hawk dome as he gives a glimpse at how they have handled life in the new found bubble. Another weak storyline to come out of the Convergence saga as this issue really made no sense. From bizarre flying hybrid hawk creatures to Thanagarian interventions, the story line is just a mess of action and random conversations. I was disappointed because the story started off so well but after the public costume change from Hawkwoman it just dived. For some reason the Convergence line is just really throwing a spanner in the works of these issues and having to jump ahead of time has not helped the portrayal of these story lines.

Enrique Alcatena and John Kalisz did an amazing job on the artwork. I loved the old school feeling of that almost washed pages and the elegant way that the characters were drawn. I also found that keeping the original outfits really helped to remind readers of who these two great characters were and that although the story is short, it will not be forgotten.  With giant wing spans and elaborate splash pages I really think it’s the redeeming feature to this issue.

The art is absolutely beautiful. They have kept true to the original outfits and there seems to be a grace about the pages which just makes them visually stunning. I must commend on the rendition of Hawkwoman as I found her character absolutely delightful and she honestly out shine Hawkman to me. I loved the law enforcement nature that was still presented in the pair and that they represent these characters so well sticking to their true attitudes.

Well killing two birds with one stone just because they have the same name really doesn’t feel right. I know this was Hawkman’s issue but Hawkwoman (formally Hawkgirl) got just as much time in it so why was the bio at the back only of him? This was shoving a pretty woman into the issue only because she has the tag line of being with him. I was not a fan of the poorly executed dynamic and was another disappointment in the convergence series.

Hawkman Convergence hails towards an inevitable battle to save their world as the two heroes must now face the elusive voice from beyond the dome. Will their strength be enough or will they find themselves wiped from the worlds forever?