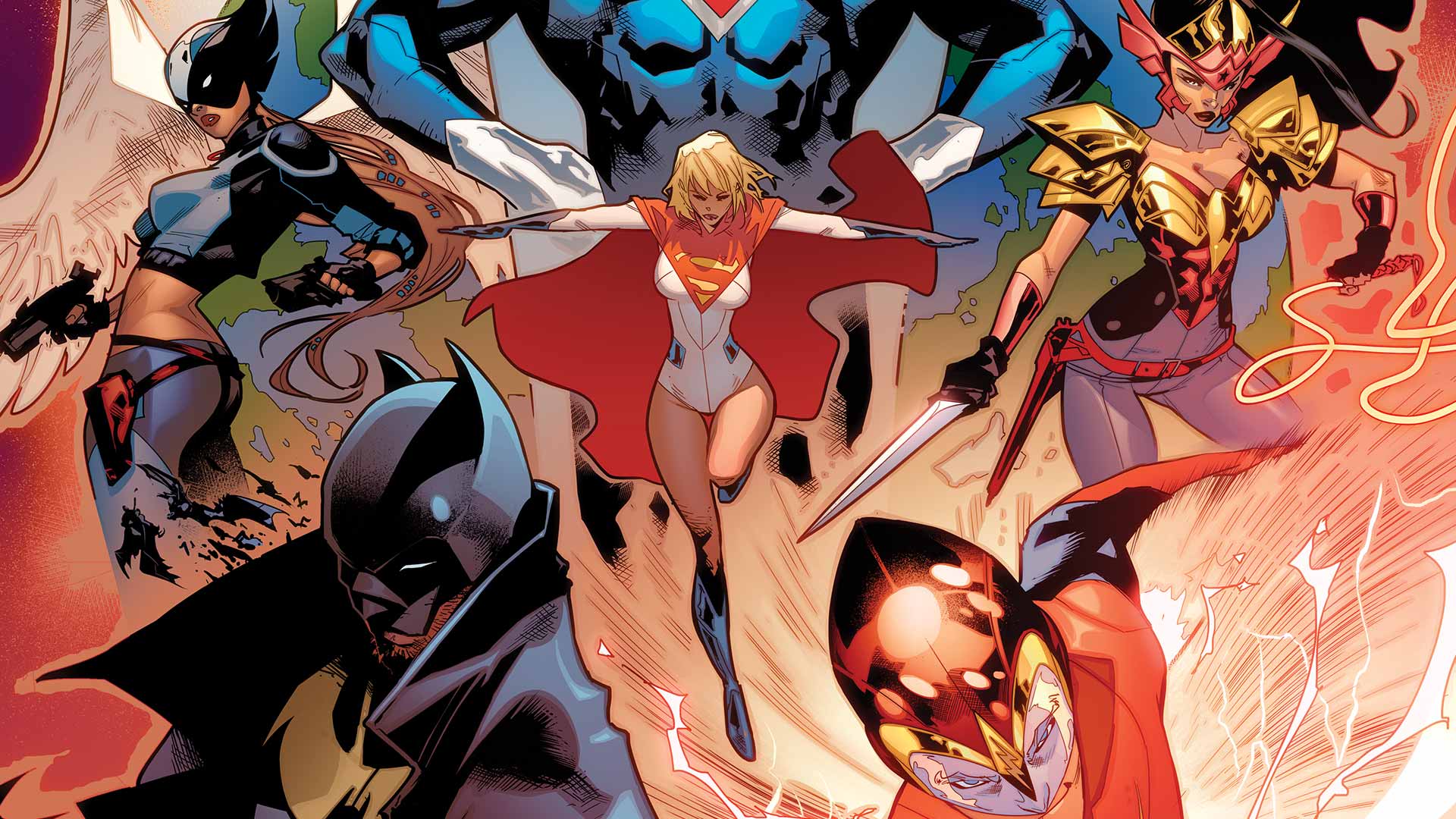 At the conclusion of FLASHPoint the DC Universe was inadvertently rebooted when the Flash tripped up the time-stream. With the aid of the mysterious interloper our hero ran once again not only for his own life, but for the sake of the universe — and the resulting multiverse that lead to “The New 52”. Among one of the most significant abstractions resulting from those actions lead to a more contemporary and somewhat “finite” DC Universe — one that didn’t benefit from a “Golden Age” of heroes.

In fact at the onset of the rebooted DCU, we learned that: “5 Years Ago” an invading force from the dangerously oppressive Apokolips is the catalyst that brings together our greatest pantheon of heroes to form our Justice League of today! Across the scheme of the then still expanding multiverse the same assault on mankind was taking place with devastating and varying results. On the neighboring world of Earth 2 in the final moments of the conflict, that world loses its three greatest heroes.

The sacrifice of the Earth 2 Superman, Batman and Wonder Woman repels the forces of Darkseid and ultimately leaves the planet to pick up the pieces and put the world back together again — unbeknownst to the people of Earth 2, Darkseid had not entirely given up on his plans of conquest, but when the mad god returned he would face a new generation of super-powered wonders ready to defend Earth 2. Sadly in the end, for all the good it would do them the planet would succumb to Darkseid’s apocalyptic plans.

And that “new generation” of heroes that rose from the ashes of the war-torn world on Earth 2 included modernized avatars built on the templates of a once golden era. They included a young Jay Garrick who is bestowed with godlike speed and becomes the Flash, entrepreneur Alan Scott suffers a great loss and in his darkest hour a fire lights his way allowing him to become the Green Lantern. Joined by a winged Hawkgirl, a newly minted Dr. Fate, and new heroes taking up the mantle of the Batman and Superman, these heroes fought bravely only to lose everything at the dawn of the Convergence.

The Earth 2 heroes played a pivotal role in the success of that crisis-event, and at its conclusion were rewarded for their efforts with an entire new world to populate after the loss of their first Earth 2. Heralding the post-Convergence launch of the new title Earth 2: Society. Written by Daniel H. Wilson and drawn by Jorge Jimenez it chronicles the period after “planet-fall” as the survivors aboard the several life rafts that lifted off the former dying Earth 2 now reconstruct a culture on a new world.

The title reunites those aforementioned Earth 2 heroes that banded together facing insurmountable odds against Darkseid, and introduces a new Batman (this world’s third) and it is Dick Grayson taking up the mantle — a learning curve to be had no doubt. Earth 2: Society has these heroes facing the greatest of all possible challenges…protecting an emerging new culture facing the frontiers of a great unknown. Will they band together, or will a power struggle emerge that will pit friend as foe?

But most curious of all, at the conclusion of the Convergence event, the DC Universe is (once again) rebooted, reset to the multiverse as it existed before the events of the Crisis on Infinite Earths. In effect, Crisis never occurred and this latest “reset” of the multiverse has set things just as they were previously to the final moments that once aligned the multiverse into one continuity. If this is true, and this “new” Earth 2 is situated in the same “cosmic space” as its predecessor, what does that suggest has happened to the original heroes of the Golden Age that once existed on Earth 2?