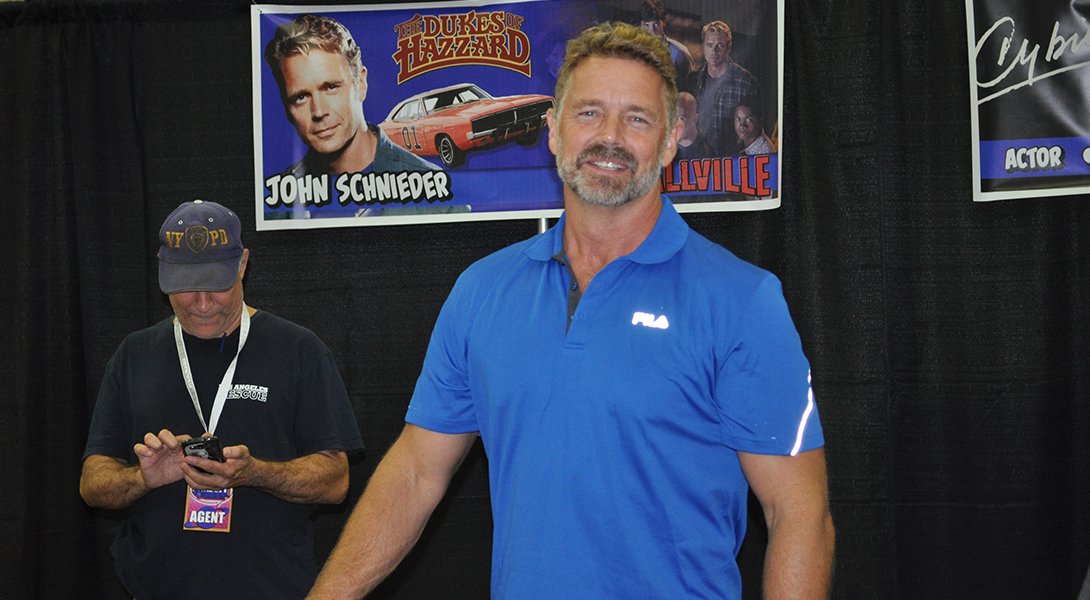 So, I still haven’t been to San Diego. And it looks like I won’t be able to go to New York this year either.

I live in the 28th most populous city (according to Wikipedia), Louisville, KY. And several years ago, I begged and pleaded, researched, wrote to people, begged and pleaded and researched some more to try and get someone to bring a comic convention here. When my search proved unsuccessful, I gave up hope.

Then, over the past few years, it turned out that I was not alone in my thirst to feed my inner geek child. Our fair metropolis (pun intended) became the breeding ground for some very respectable pop culture expos. And this weekend’s Fandomfest was no acceptation. My fellow sci-fi, horror and, of course, comic book nerds transcended on Louisville from as far away as Indianapolis; maybe farther than that, but I now for sure Indianapolis!

And, oh what sights and stars I was able to bear witness to! Some of my previously mentioned brethren were on hand in full cosplay mode. I promised each of them a mention in this article, so you can find them in the gallery below.

I was also able to interview some well known people from DC Comics shows and comics. First up was Mr. John Schnieder. Some of you will know him as Bo Duke from The Dukes of Hazzard. But in recent years, he played Jonathan Kent on the television series Smallville. I asked Mr. Schnieder what was his greatest experience working on Smallville. “After four years of not being on the show, being asked to do a couple of episodes,” said Schnieder. “I felt it was an honor to play Jonathan Kent again, even after his death.” Schneider then turned to his Dukes of Hazzard co-star, Tom Wopat, who was also at the event and had a guest role on Smallville. Schnieder jokingly said, “It’s his fault (Wopat) I was killed off, or me having super powers for a few episodes.”

Next, I spoke to actor Robbie Rist. Rist is probably best known for his role as Cousin Oliver on The Brady Bunch. He also played the live action version of Whiz on the Saturday morning show Kidd Video. He also provided the voice of Michelangelo in the first series of live action Teenage Mutant Ninja Turtles movies. Rist’s Cousin Oliver character was so popular, Batman: The Animated Series paid homage to him in the episode Baby Doll by creating a character named Cousin Spunky. Rist voiced the actor who portrayed Spunky as an adult on the show. “I think about who I got to work with. Kevin Conroy, Loren Lester…  what the hell am I doing here?” said Rist. “It’s a weird thing that we’re still talking about it even today.”

I stopped by the booth of comic book artist and friend Kevlen Goodner. He introduced me to his son, Justice Goodner, who’s an artist in his own right. Ever the doting father, Kevlen mentioned that Justice is a recent graduate of The Kubert School, a three-year technical school that teaches the principles of sequential art and the particular craft of the comics industry as well as commercial illustration (according to Wikipedia). After graduation, Justice received a call from Jay Leisten, an artist for Marvel and DC Comics, who asked him if he would like a job as an assistant. Of course, Justice said yes. Hopefully soon, we’ll see some of Justice’s own art in a DC Comic.

So, maybe one day I’ll make it to San Diego or New York for their Comic Cons. But I am very appreciative to have been able to make it to Fandomfest, right here in my own back yard.

Robbie Rist (Spunky in the episode "Baby Doll" of "Batman: The Animated Series")