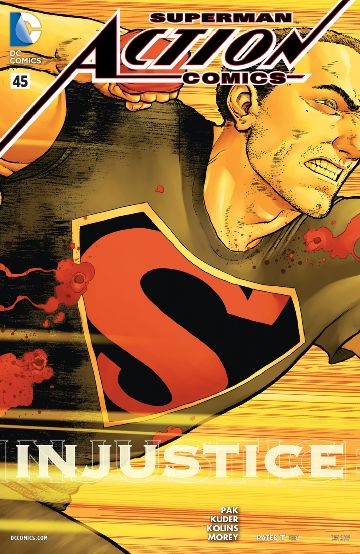 So I just finished reading Action Comics #45 and I must admit I’m pretty impressed. Written by Aaron Kuder and Greg Pak the story of a depowered Superman trying to find Wrath continues. The art by Greg Pak is flawless and we really see Superman’s struggle to find a new identity in the world. Although the public opinion is against him, Superman is shown still saving lives regardless of his powers constantly changing. He even goes through the process of acquiring a new identity–which I’ll touch on in more detail later.

The story itself is well told, starting out with Superman saving lives in the middle of a hurricane showing that he still has what it takes to save lives. Throughout the comic we get reactions and viewpoints of different but everyday people and how they view Superman. Some still see him as a savior, while others see him as an alien threat and that everything he does no matter how good– is simply propaganda. This is shown to take a toll on Superman in the comic as he has grown to virtually push anyone that can help him away. Toyman makes an appearance, appealing to Superman to let him help catch Wrath and those responsible for his powers being in constant flux. Superman however refuses, saying that no one else needs to be hurt due to his choices. I love how we see a Superman so different from what we have been accustomed to for so long–in this book he’s no longer trusting or naive. Instead Superman as grown on the brink of paranoia, even destroying one of his bases because he thought it was compromised by Toyman’s appearance.

My only complaint really is that Clark Kent is gone. Superman using Waynetech resources changes his identity in order to find Wrath without being detected, and to be able to have a somewhat normal life as well. Although its not a real complaint, I think we can all agree that Clark Kent, like Superman is an icon. As a comic reader the name Kent is almost burned into your brain. The writers challenge this concept, and I’m looking forward to seeing how it plays out in the future with more stories. No more Clark Kent, the uniform is now jeans and a t-shirt and I must say I’m impressed with the direction. Aaron Kuder and Greg Pak actually challenge the status quo of your brain by introducing the idea of a new Superman that’s no longer through Clark Kent’s eyes. Will Superman get his powers back? Is Clark Kent gone for good? Kuder and Pak force you to ask these questions with this issue– and that’s what makes it so impressive.

Overall I thought Action Comics #45 was a solid read. The pacing was great, artwork was ideal and we actually get to see how the world both views Clark Kent and Superman. Kuder and Pak throughout the book seems to show that Superman is having another side emerge. I remember the Superman I know as a trusting character, who gave everyone the benefit of the doubt until proven otherwise. Kuder and Pak toss this idea out the window–and I love it. This issue shows a Superman that’s constantly on his guard, one who has to almost move through the shadows to find out the truth of what’s going on and to ultimately stop Wrath. Action Comics #45 encourages to really ask this question–who really is Superman without Clark Kent? I believe we will see those answers pretty soon.