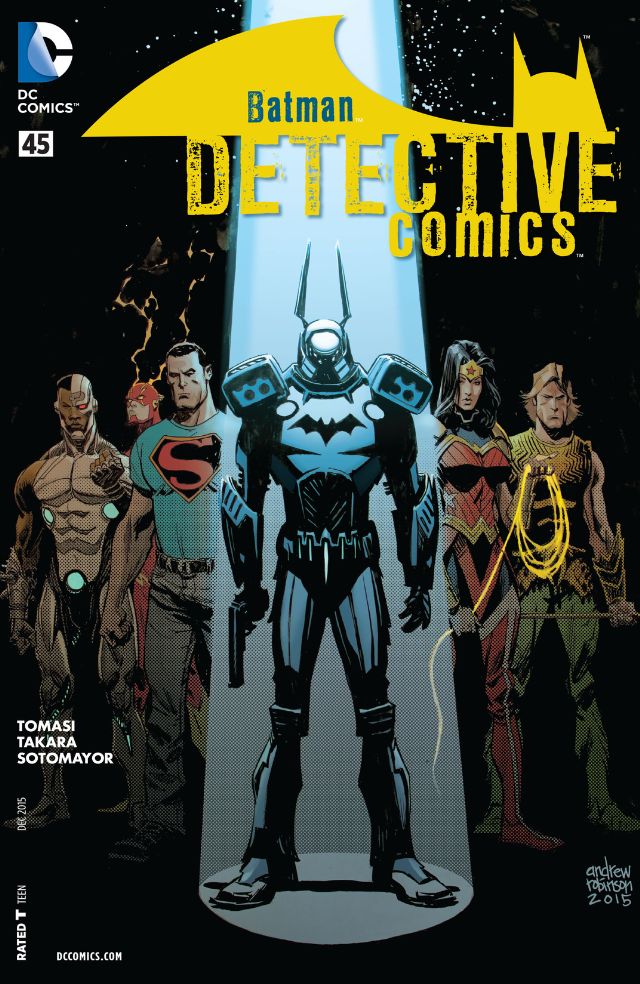 Just finished reading Detective Comics #45 and I have to admit–I’m impressed by Jim Gordon being the Batman. Written by Peter Tomasi and drawn by Marcio Takara, Detective Comics takes everything you thought was comfortable with Batman and puts it on its head–and it’s wonderful.

The artwork is detailed and thorough and the writing is great as well. From the very beginning Tomasi puts the idea of Bruce returning to the cowl on its head as innocent people are getting murdered–and Bruce is home drinking tea. Now before you say that’s not in Bruce’s character–that is exactly what makes it so brilliant. Suffering from amnesia Bruce seems to have no idea he’s Batman and it seems that Alfred has no interest in reminding him either. A visit from the Justice League doesn’t go to well as Diana attempts to see what Bruce remembers through her lasso–and it reveals nothing. All the work he’s done as Batman he doesn’t remember and when the League attempts to remind him, Bruce simply believes that he’s always helped them through his resources at Wayne Enterprises. The Justice League leaves Wayne Manor seemingly disheartened that a core member seems to be lost to them. It’s at this point that Jim Gordon while working a case of his own, is approached by the League to help them. Gordon, who feels that he’s literally out of place says he’s not their Batman and that Gotham City needs his undivided attention.

Although this was a great issue I can’t help but to want to see Bruce in uniform again. Tomasi through his writing explores a different side of Bruce Wayne. Here we see a Bruce that asks about his parents to Alfred, is actually friendly and cordial, and admits to Diana through the lasso that he trusts everyone. Basically everything that made Bruce Batman is gone out the window–and Tomasi makes you miss it. From the reading of the comic book you won’t be the only one either. The League seems to suffer greatly from Batman’s departure trying to crack a case that the Flash admits Batman with all of his paranoia would’ve already handled. The interaction between Bruce and Superman–the World’s Finest is downright weird with Bruce casually smiling and shaking Superman’s hand. Even Wonder Woman and Superman acknowledge that Bruce is no longer the same person and the League leaves Wayne Manor in a somewhat sad and confused way. Tomasi makes you wonder exactly what will it take to get Batman to come back to all of us?

I have to say the Detective Comics #45 was a pretty good read. The artwork was great and the storytelling was strong. Tomasi really shows in the first few pages just how important Bruce as Batman was to the League. If Superman and Wonder Woman are the muscle of the group, then Batman is definitely the brain–and they struggle without him. Alfred has a good role in this issue as we see him care for Bruce not as a medic, mechanic or anything of the like. Instead we see him as simply a butler–and I think Alfred wants it that way for Bruce’s sake. Although I was hesitant on Gordon taking the mantle this issue actually makes you enjoy it. It shows you a different take on Batman but at the same time makes you appreciate Bruce more and what he contributed to Gotham and as a member of the League. Tomasi makes want you want to root for Gordon and his success as Batman–but at the same time make you want to see Bruce Wayne’s return. It’s a wonderful concept that I thought I wouldn’t enjoy but the more I read it, the more I see the concept of where he’s reaching. Will Bruce Wayne return to the mantle? And if he does what would it mean for Gordon? Tomasi leaves this issue making you ask these questions–and that’s what makes it so good.