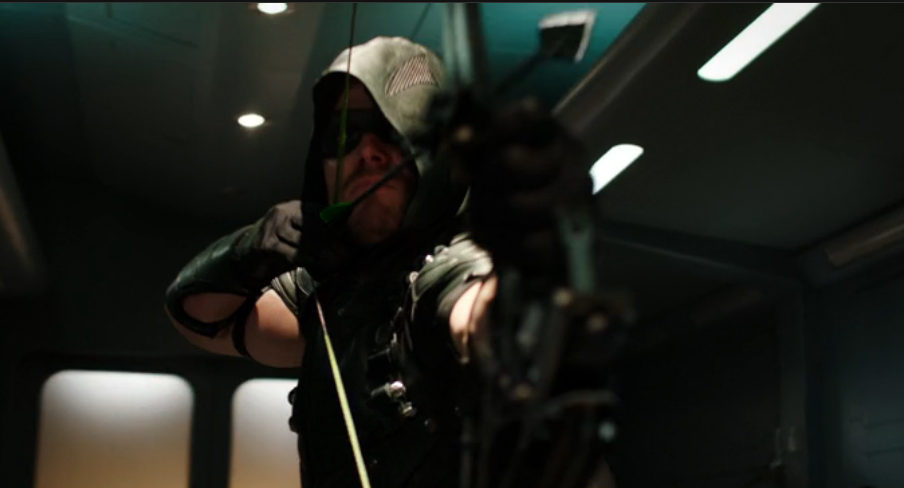 Oliver Queen has given up his life as the Arrow.  He and Felicity have left Starling City for a quieter life in the suburbs.  Everything seems to be going well for them until Laurel and Thea show up and convince Oliver to come back and help save the city.  Starling City (now re-branded as Star City) has come under siege by a highly organized group of criminals nicknamed Ghosts, and their leader Damien Darhk.

Oliver is not only having to face his return to Star City and his life under the hood, but he is also having to deal with the darkness in himself.  Is he a monster, is he responsible for the darkness engulfing the city?

In the flashbacks, Oliver is dealing with the return of Amanda Waller and a new mission that is sending him back to the island of Lian Yu.

On the surface, this episode could easily have been a disjointed mess.  It starts very fun and light with Oliver and Felicity living happily ever after, and then quickly takes an actiony turn as we cut back to the events of Star City.  However, the director and writer keep the varying tones under control.  It’s easy to see that Oliver and Felicity will never be truly at peace in their new life, so there is a darkness under the happy new life.  While in Star City, our remaining heroes are fighting to keep the light from being suffocated by the darkness of the Ghosts.  The two settings balance each other out.

The episode doesn’t waste much time in getting to the action, and they continue to deliver the great fights and stunts that we have come to expect from the show.  Seeing Thea as the Red Arrow/Speedy feels natural.  Laurel as Black Canary seems much more confident and in control as a hero.  Even Diggle has become a proper costumed hero, although he doesn’t seem to have a code name yet.

Oliver’s return as the Green Arrow is well done.  He is more than a new costume and a new name though, his attitude has changed.  He is worried about becoming a monster, but he seems to have found a way to balance it within himself.  He feels like a leader and a hero now, more than just a vigilante.

The episode ends with two major revelations that will set the stage for the rest of the season, both of which were equally shocking.  Not sure if there is any creative misdirection, but there is definitely more going on than we’ve been told so far.

There isn’t much to complain about this episode.  Willa Holland as Thea doesn’t quite seem comfortable with the bow yet and she looks a bit off balance, especially in the early fight scenes.

Towards the end of the episode, Diggle has a chance to shoot Darhk, but he only uses a tranquilizer dart and not a bullet.  However, all throughout the episode we see Diggle shooting henchman left and right with no mention of non-lethal force.  It’s strange that he would all of a sudden decide to just drug the enemy versus killing him when he is already aware of how dangerous he is.

I’m not sure if I would call the final scene with Captain Lance a negative or not.  It may simply be too early in the season to judge his actions here, but it does seem out of character for him to act this way.  He has always been a solid, honest cop and I don’t think he could be turned so easily.

This is a solid episode and a great way to open the season.  Coming off of Season 3, I think the producers felt they needed to up their game and in this episode they succeeded.  I have a very good feeling about this season and the new direction for our heroes.  I can’t wait to see where they take us this year.