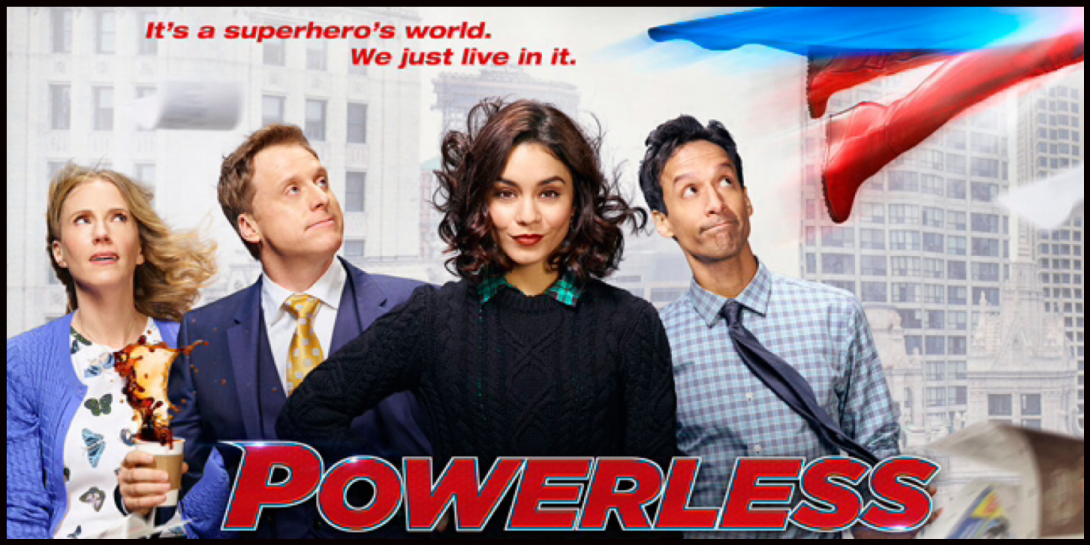 Earlier this month, NBC ordered into production a new comedy set in the world of DC Comics titled Powerless.  Now the network has released the full series description for the sitcom.

In the first comedy series set in the universe of DC Comics, Vanessa Hudgens (“Grease Live,” “High School Musical”) plays Emily, a spunky young insurance adjuster specializing in regular-people coverage against damage caused by the crime-fighting superheroes. It’s when she stands up to one of these larger-than-life figures (after an epic battle messes with her commute) that she accidentally becomes a cult “hero” in her own right … even if it’s just to her group of lovably quirky co-workers. Now, while she navigates her normal, everyday life against an explosive backdrop, Emily might just discover that being a hero doesn’t always require superpowers.

Ben Queen serves as writer and executive producer, with director Michael Patrick Jann also serving as an executive producer.  Powerless is produced by Warner Bros. Television and based on the characters from DC Comics.

In early 2016, NBC executives Robert Greenblatt and Jennifer Salke spoke about the comedy, explaining that it takes place in the DC Universe, and it will not only feature characters discussing the classic heroes fans know and love, the pilot’s main hero is a “recognizable” one.

“This is a world where superheroes are not only just on green screen out the window of this insurance office, but they’re also running into you on the street and wreaking havoc,” Salke stated of the show’s over-arching premise. “The idea isn’t that it’s the creme de la creme of the superheroes. It’s a world where there’s a whole population of superheroes with all sorts of all challenges themselves. So you’re seeing quite a range of characters in that realm in addition to our great, kind of grounded human ensemble.”

DC Comics’ C-level superhero Crimson Fox, one of many super-powered characters who will be featured on the series, was spotted on the set of Powerless back in March.

As for whether major characters like Superman or Batman exist in this version of the DC Universe, Salke said, “Oh, yeah. They’ve namedropped everyone. I don’t think they’ve said anyone’s off limits… Just creatively, what I’ve seen so far of the pilot, the main superhero that’s featured is not one of those [Batman or Superman-type heroes], but it’s someone recognizable.”

“They’re in the background,” Greenblatt elaborated on how the show will deal with the everyday superhero existence. “They’re wallpaper, I suppose, as opposed to they’re not the main characters in the show, so you may see them blowing up a building out the window or something.”

“You’re definitely hearing about them about them because they exist in the world,” Salke added. “It’s a question of speaking parts and it’s a wide range of superheroes.”

Powerless is currently slated for a mid-season debut.