Review: The Legend of Wonder Woman #6 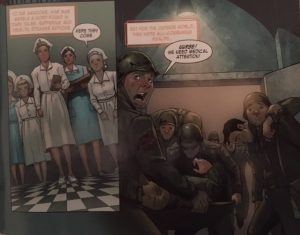 Almost 5 years ago Brian Azzarello and Cliff Chiang introduced and reinvigorated Wonder Woman for a modern audience in DC’s “New 52” publishing initiative. While critically acclaimed and well received for the most part, there were a few things that didn’t sit well with some readers. The Legend of Wonder Woman is doing the same thing, but not in the modern context. This series manages to draw on multiple versions of the character while at the same time maintaining the core aspects of the character. By utilizing the characters original World War II setting, De Liz is able to make this feel like an iconic version while remaining fresh. Furthermore, she utilizes the setting to point out how closely this character’s origins are connected to the period. 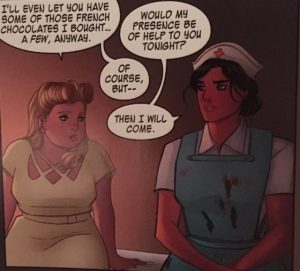 Diana faces the horrors of war on her first day in the triage ward as a nurse and is overcome by what she experiences. This is a young inexperienced Diana who has truly come from an island of paradise bereft of wars and mass bloody conflict. This Diana is still innocent. She returns to her room she shares with Etta as Etta is preparing to go out and sing in a show that evening. It takes some convincing, but Diana finally agrees to go along. At the club, they run into Steve Trevor and just as he and Diana are left alone at a table, Diana overhears about a soldier being brought into the hospital who seems to be suffering wounds from an encounter with the Duke of Deception. 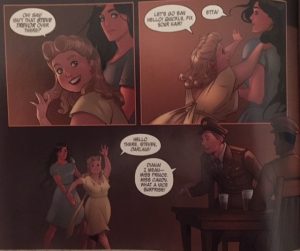 Diana goes to the hospital, sees the soldier and gets enough information to find out where the encounter took place. Diana goes to her room and puts on all the apparel given to her by her mother- the Boots of Hermes, the Girdle of Zeus, the Tiara of Athena, the Braces of Artemis and the Lasso of Truth. With these she goes into battle against the Duke and his undead legion. She saves lives, inspires troops and saves the day. Upon her return to Etta, she confides in Etta the truth of her origins and her reason for leaving Themiscyra and searching out the Duke of Deception. Etta comes up with a wardrobe enhancement for Diana and constructs a costume for Wonder Woman as she has been named by the troops she saved. 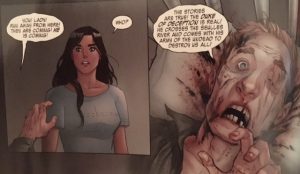 The innocence and hope that are portrayed in this incarnation of Wonder Woman owe much to the post-Crisis on Infinite Earths version by George Perez. This adds to the sense of hope and light that are essential parts of the character. These elements are really brought to the fore in this issue’s events. Etta’s construction and design of what is sure to be a very classic looking Wonder Woman costume all make sense in the events of this story. Without the World War II connection, the costume doesn’t always make sense. There have been attempts in different runs to explain it, but the World War II connection seems to work best. Diana’s use of the Lasso of Truth to eliminate the undead was both unique and inventive. 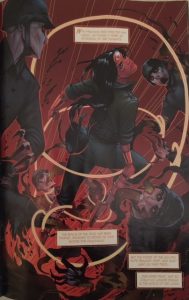 Many felt the Azzarello/Chiang run was the definite modern Wonder Woman run. The series is certainly vying for consideration. While it is heavily influenced by the original World War II version, this take also allows for modern sensibilities to add into the equation. With De Liz recently acknowledging further plans for this Wonder Woman, one can’t help but consider how this will affect the current in-continuity Wonder Woman who is getting another creative overhaul with DC Universe: Rebirth.

This is a fun, all-ages book that is not juvenile in its approach. There’s a hope and positivity in this Wonder Woman that hits the mark on the core of her character. In The Legend of Wonder Woman, Diana comes across as the iconic character she is and the story is good enough to match the tone. 4 ½.