Black Canary #12 is written by Brenden Fletcher with art by Annie Wu and Sandy Jarrell and colors by Lee Loughridge. 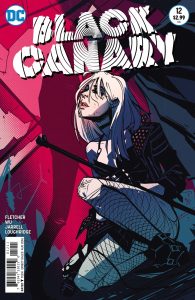 Dinah learned that her parents had been working undercover in order to arrest a musician named Issak Orato. When he found out, Orato killed Dinah’s father. Her mother then used a magical martial arts move to defeat him. Orato kidnapped the Black Canary band in an attempt to force Dinah to use the move to fix him. When she wouldn’t, Orato stabbed her.

Since this is the last issue, it’s great to have Wu back with Jarrell. I’ve become a huge of Wu’s over the last year and her work with Jarrell is exceptional here. Loughridge’s colors are also excellent as always resulting in a book that is wonderful to look at.

This issue is very much about Dinah deciding to finally be a superhero. While I love the idea of her being a rock star, we all also want her in the place she is in Green Arrow Rebirth #1 and this issue really does a great job of getting us there.

The “vision quest” has a lot of interesting moments. In this vision, Dinah is married to Oliver Queen. I am fascinated by this. Is this the reason why she goes to Seattle? Does she go there intending to meet Ollie? I am curious if this detail is simply a reference or if it will play into Dinah’s character in Green Arrow.

While I like moments in the vision and it is a cool idea, it takes way too long. The message is simple; Dinah is wasting her gifts as a rock star and needs to step up. The vision goes for a about half of the issue and really just hammers in that point over and over again. It gets really obnoxious by the end.

As a result of that, the end fight and the goodbyes feel a little rushed and aren’t as satisfying as one would hope.

I have a small problem with the art. There is a point towards the end of the issue in which Dinah visits Kurt’s grave and Amanda Waller shows up. Or at least, I thought it was Waller. Dinah calls her Amanda and I can’t think of who else it could be. Except, this woman looks very white. If it’s supposed to be Waller, that is a major screw up. However, it may not be Waller and I may be just forgetting some supporting character from a previous issue. 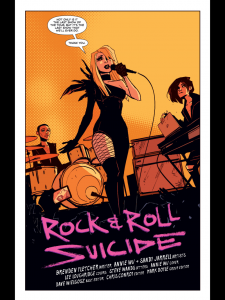 Overall, this is a decent issue. The art is fantastic for the most, I like what is done for Dinah’s character and there some creative concepts. However, certain elements go on too long which results in others not having enough time to completely work. Ultimately, I would recommend waiting for the trade on this one.

Fun Campy Action to be had in Wacky Raceland #1