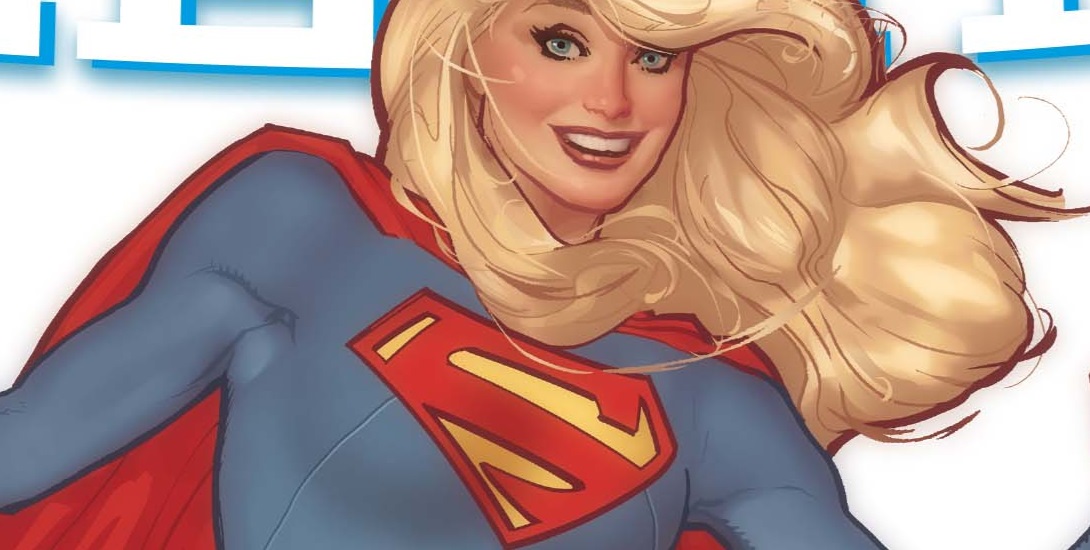 Kara tries to regain her powers as her Kryptonian father’s past comes back to haunt her.

The cover by Emauela Lupacchino and Michael Atiyeh is a cool portrait of Supergirl. I love Lupacchino’s style so it was a real treat to find out that she is the artist on this book and Atiyeh’s colors are great on the cover as well.

In the interior art, pencils are by Lupacchino with Ray McCarthy on inks and Atiyeh on colors. The style is a nice blend where it looks somewhat like a cartoon but is still very defined. Every person looks distinct and can easily be told apart. It’s very reminiscent of Lupacchino and McCarthy’s work on Starfire which makes sense considering it’s the same team. However, it does work for Supergirl. Atiyeh’s colors are also great. Overall, this is a spectacular looking book.

I’m one of the few people that actually liked Supergirl’s New 52 costume but it is nice to see a more classic looking outfit. The redesign is a nice fit for the new team and tone and it looks fantastic.

As a Rebirth one shot, this is mostly about setting the new status quo but writer Steve Orlando does a great job at hinting at what’s to come while paralleling what I imagine the themes of the first story arc will be. Kara is going to have face the mistakes of her father and this issue is just the first step in that. It is well handled.

Supergirl solves her conflict with reason and compassion. I like action as much as the next guy, and this book has some cool stuff in that regard, but I always appreciate when characters are more mature than that. Kara succeeds because she’s a good person that cares about others. She can punch stuff too, which is awesome, but there is a humanity to her that I wish was seen more.

However, the action is dynamite. The art team excels in every panel especially the action beats. It’s thrilling to watch Supergirl throw down in this.

I’m not sure how I feel about the new status quo. It’s hard to say since it’s just set up here but I don’t know if Kara having a secret identity and going to school is necessary. I like pairing her with the D.E.O. but making it different enough that it doesn’t feel like it’s ripping off the TV show. I just don’t buy the director forcing her to go school as a way to fit in. Or maybe I’m just rejecting the idea of her going to high school because I do not want to read about high school. It’s not a huge complaint but it puts me in a more cautiously optimistic place while the rest of the book excites me for the next issue.

Supergirl is in great hands. Orlando handles the character well and I am engaged in where the story is going to go. The artwork is fantastic with one of the best teams in the business behind it. Even without the good writing, I would recommend this issue based on how amazing this art looks. Overall, this is a fun and exciting issue and I highly recommend that you check it out.