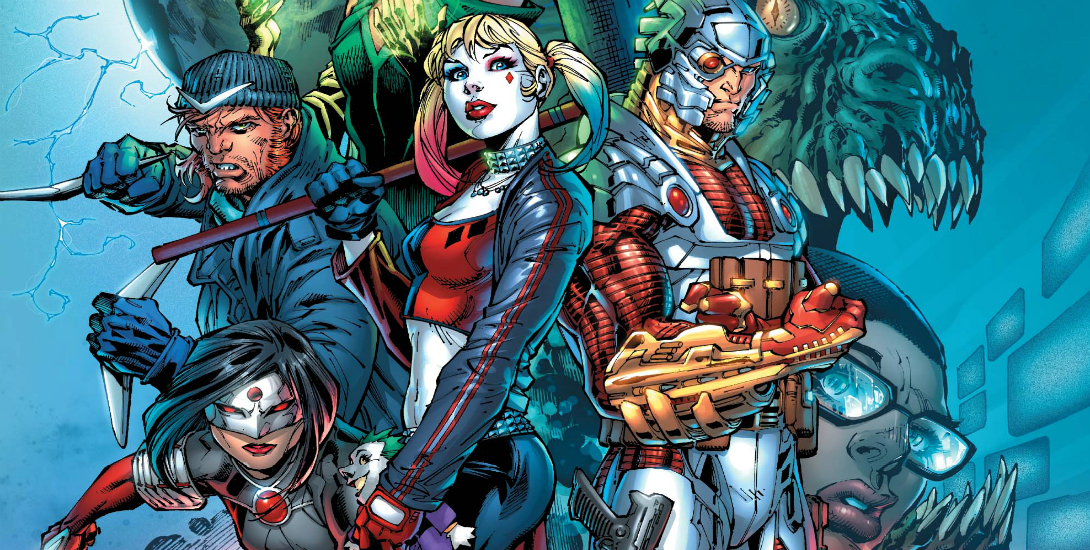 Story One: “The Black Vault. Part One: I Wanna be Sedated.”

Boomerang, Harley, Deadshot, Flag, Katana, Enchantress and Killer Croc have to go somewhere to do something. Waller, who narrates this issue, is cold and heartless.

Deadshot’s origin tale as told by Waller to Lawton as he stands in in cell. Special guest star: The Caped Crusader himself.

I am not sure if you were paying attention but Jim Freaking Lee is drawing this issue. JIM LEE! Seriously. Wow. In the future, poets will write sonnets about Jim Lee’s artwork. Art historians will argue that the work of Jim Lee should hang in museums. In this issue of Suicide Squad, you can get Jim Lee for just a few bucks. What are you waiting for? If you wanted to feel like you were stuck in the dank cells of Belle Reve, Lee provides you with that feeling. You can see each individual fold in a storm cloud. You can see and hear robot arms make “whrr” and “psshh” sounds and feel like you are in the room with them. Do you want to be at the receiving end of one of Waller’s scowls? In this issue, at the hands of the master, you are.

Waller cares about someone. It is not said, for she would never say such a thing, but on her desk is a picture of a family. It is small, but it is in a few panels. Will more come of that in the future? We can only hope. Williams seems to want us to like Task Force X in a new way. It was always easy to like them because they were doing things we would love to do but couldn’t. In this book, we see some vulnerabilities of several members of the team. Considering they are fully part of the DCU in print and on the screen, the editorial team has decided that we should actually like them versus only liking them for being a-holes.

The Deadshot story, “Never Miss,” is drawn by Jason Fabok and this works really well because he did the Rebirth issue of the main title. The mask he created for Lawton is violent and frightening. In fact, we get to see just how frightening it is when Deadshot comes fact to face with Zoe Lawton. Zoe’s moment of realization is perfectly written and drawn equally well.

Katana is used only sparingly. It is a team book, and she is part of the team, but she serves mostly as background. There are few people in the DCU as badass as Katana. Hopefully, she will get to let her swords out soon. The two stories, while both good, are not long enough. The first part of the first story is one a few pages long. Lawton’s origin story, while good, is also too short. Considering Suicide Squad has a second book in Most Wanted, it seems to me that these back-stories are better reserved for that book. The attention span of most Americans is short enough as it is, we do not need to make it worse.

You only need to notice that Harley’s shirt reads “Rebirth” to fully understand what this book is about. It is funny, it has heart, it is fully aware of itself and it has Jim Lee. JIM LEE. Wow.