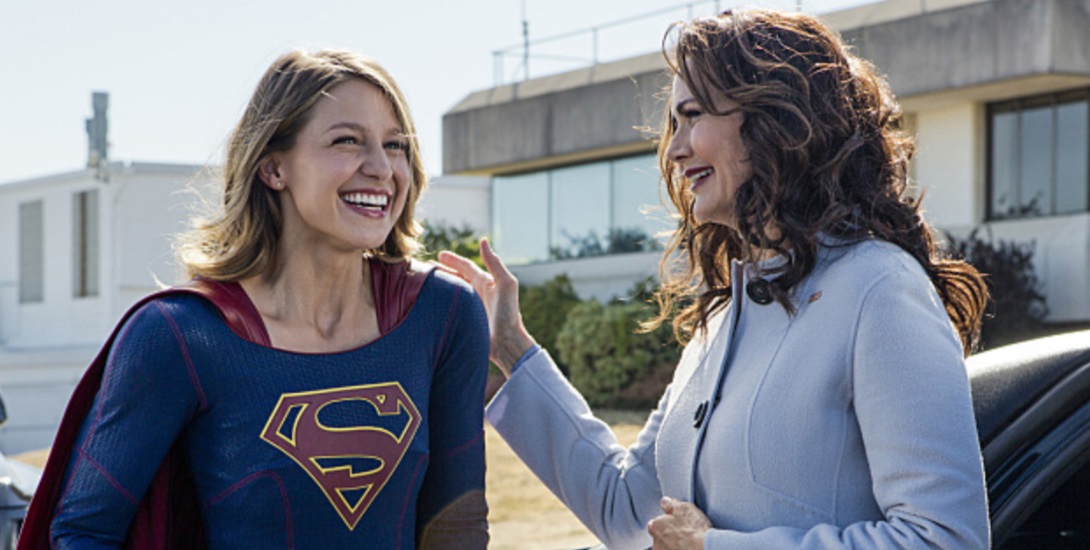 The mysterious alien in the pod wakes up and escapes the DEO shortly before the President of the United States is attacked by an alien. Supergirl and the DEO work to find the alien and protect the President.

Lynda Carter plays the President and that is too cool. It’s a lot of fun to see her play this role and she gets a lot of good dialogue. She doesn’t have much screen time but there is potential to do a lot more with her which would be cool. While I like these gimmicky casting choice, the Berlanti-verse shows always take it one step further and actually give them an interesting role to play. She isn’t here just to be Lynda Carter in an episode of Supergirl to try and get press. She is playing a character that could be really cool down the road.

I love Kara in this episode. I mean, I always love Kara but she’s really good here. Watching her geek out over Carter is adorable and a lot of fun. It’s also relatable because I was doing the same thing. However, the show isn’t afraid to show her faults. Pod-boy is revealed to be Mon-El from the planet Daxam. There is an ancient feud between Krypton and Daxam which leads to prejudice on both sides. Kara automatically assumes that Mon-El tried to kill the President simply because he’s a Daxamite. It was nice to see her have to overcome her prejudice.

The episode is very much about prejudice. The President is attempting to pass a law that will allow aliens to be legal citizens in the U.S. which some people oppose and some people are for. The episode brings attention to racial politics in dialogue as well as other forms of prejudice which is a good thing to deal with. However, it doesn’t demonize the people with prejudice. The episode definitely concludes that prejudice is wrong but tries to show where it comes from. We’re only human and we make mistakes. But, we can be better and that optimism and hope is what this episode and the show overall has always been about. I also like that Kara has to put aside her personal bias in order to be a reporter. That was fun to see her deal with even though it’s more proof that she should not be a reporter.

I liked the history of Krypton and Daxam in the episode. Anytime we get to learn about Kara’s heritage is great and I hope that there is more of it. I also love the idea that both characters think the other planet started it.

I am slowly falling in love with Katie McGrath as Lena Luthor. She is really interesting. Her morality is questionable but she is clearly not a villain. Her device to identify aliens does seem wrong and is an invasion of privacy. But, her heart seems to be in the right place. She genuinely thinks she is doing the right thing and wants to help people while also making a profit. I loved her dialogue about trying to reach Lex and turn him away from villainy but not being able to. She has this potentially dangerous point of view that some people are just bad and nothing can change that. That is a relatable viewpoint but certainly an over simplification. I am really curious to see what happens next with her.

Floriana Lima debuts as Maggie Sawyer and I like her. As a person of color and a lesbian, she relates more to the aliens than humans. I think that’s really interesting and is where most of the discussion of prejudice comes from. She also introduces us to an alien dive bar that I absolutely loved. It’s similar to Lorne’s bar from Angel but not as nice.

Nadine Crocker plays the villain, Scorcher, and is a lot of fun. She’s a good over the top villain. And I like her point of view. The President’s alien law could just be a front for registration. It could easily be a way to simply find and eliminate the aliens. I am curious if this will be touched on again or if it was just an idea for this episode.

I am a huge fan of A Nightmare on Elm Street so it’s always exciting to see Rachel Talalay direct.

Why is name Mon-El? In the comics, that is not his actual name. When he first arrived on Earth, he suffered from amnesia and naturally assumed he was a relative of Clark’s. Thus, Clark named him after his family and gave him the El name. If he knows he is from Daxam, why does he have that name? Are they related or is it just a common name like Smith?

While I like Crocker’s performance, the script does nothing for her character outside of a potentially interesting motivation. She is never even named in the episode; I had to look it up. The villains are usually better defined than this.

I still don’t care about Cat Co. even with Cat Grant gone. It’s never really interesting. I like Mechad Brooks and he gets a couple of good moments but, generally, everything at Cat Co. falls flat.

Overall, this is a strong episode. It’s almost geek-overload with all of the stuff they throw into this one but it works. There is a solid story here that is a lot of fun to watch. However, the villain is poorly characterized and the subplot at Cat Co. is boring. It’s still a really fun episode that I enjoyed a lot.

Mon-El is a character mostly associated with the Legion of Superheroes and Superboy. He has had several different backstories and names but usually has something to do with the Legion and has a relationship with the Kryptonians.

Lynda Carter obviously played Wonder Woman in the 1970s television show. She references the Invisible Jet which was cool and I believe Blake Neeley throws in some musical cues as an homage to the show.

Maggie Sawyer is usually a Gotham detective who had a serious romantic relationship with Batwoman. The two very nearly got married.

Miss Martian debuts at the end of the episode. In the comics, she is actually a white Martian. I am curious if the show will deal with that or if she will be Martian Manhunter’s niece like in Young Justice.