Summary
The issue begins with a brief recounting of the history of the Shade. He was a man whose life was full of darkness and horror, but had found love and reformed – however, that was a long time ago…

Next, we see Barry and Iris jogging together in a Central City park. Iris tells Barry that Wally has been skipping school and that his grades have been slipping. Iris asks Barry to have a talk with her nephew.

They then encounter a minor supervillain called Papercut, who attempts to rob them and others present in the park using razor sharp bits of paper.

Kid Flash then appears and attempts to stop Papercut, however Papercut is more powerful than he appears to be at first. Not only can he control paper, but he has control over wood, which he uses to turn the trees in the park against innocent bystanders.

In the confusion, Barry runs off to “get the police”, changing into the Flash. The Flash takes Papercut out easily, carts him off, then returns to talk to Wally. Barry informs Wally of what he did wrong with Papercut, then proceeds to lecture him about skipping school.

When Barry says that he thought he could trust Wally, Wally angrily replies that the Flash has no right to talk about trust when Wally doesn’t know who he really is, even though the other Flash (the elder Wally) apparently does.

Back at work, Barry considers the rumours he’s investigating of a female speedster that’s been spotted around the world. Barry suspects that it’s Meena Dhawan, but wonders why she wouldn’t have contacted him or Wally if she had returned from the Speed Force.

Meanwhile, Wally hears rumours about a “walking shadow” from a friend at school, but he is more concerned about facing his aunt. And rightfully so, as she grounds him from going out as Wally or as Kid Flash. 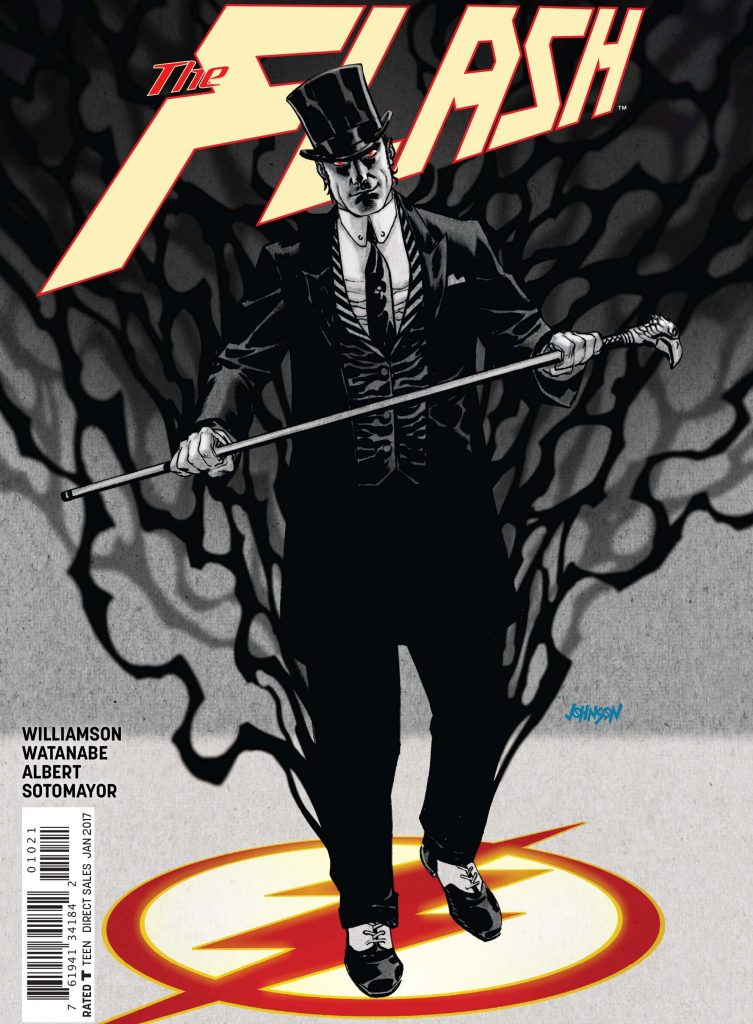 However, almost immediately, Wally takes off as Kid Flash to investigate this “walking shadow.” Before long, Wally finds the Shade who sets his shadow demons on Kid Flash. Unable to outrun the demons, Kid Flash finds himself transported to the shadow realm that they originate from.

Positives
We get to see some development of the relationship between Flash and his new sidekick. Barry is showing the seriousness with which he takes the responsibility of guiding Wally by showing that there are consequences for Wally not living up to his end of their agreement.

However, there are also cracks in the relationship, as Barry demands trust from Wally, but is so far unwilling to share his secrets with Wally. Also, Wally seems to be jealous of the relationship that exists between the elder Wally and Barry. It will be interesting to see how Barry and Wally smooth out these issues.

Negatives
It’s a bit disheartening to see the redemptive arc of the Shade in Starman being undone by making the Shade a villain again, but perhaps the reversion will prove to be merely temporary. Plus it is a nice touch that Barry and Wally are facing a Golden-Age Flash villain. Perhaps this will tie in to the return of Jay Garrick that was foreshadowed last issue.

Verdict
This is an interesting look at Flash guiding his green protégé in his early career, and sets up what promises to be an epic battle between our heroes and the Shade.