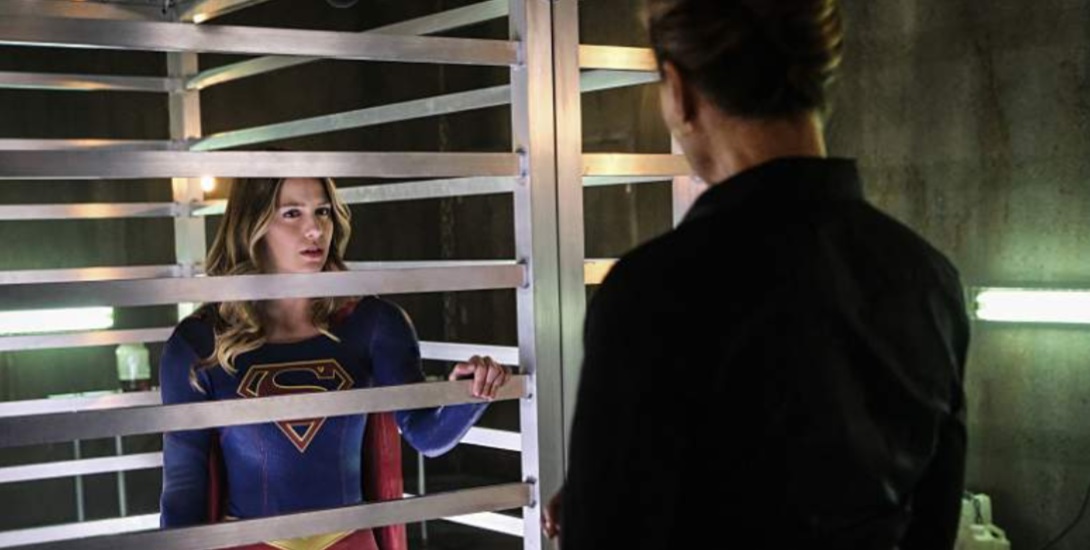 Guardian is framed for murder while Supergirl tries to rescue Mon-El and Martian Manhunter suffers from the effects of the white martian blood.

Kara’s selflessness is put to the test here. She allows herself to be horribly violated just to save Mon-El and it’s fairly intense. It was actually slightly hard to watch while Cadmus treated her like a rag doll. The episode lives up to the use of dark in the title. I really liked all of the information given on how Lily Luthor views her son, Lex. It’s implied that Clark and Lex were friends once similar to Smallville which is interesting. I am curious if they are setting up for Kara and Lena to go down a similar path and become enemies.

The big fight between Martian Manhunter and Miss Martian is spectacular. The show doesn’t hold back on this one and it’s incredibly well done especially the special effects. David Harewood is the highlight of the episode as both Martian Manhunter and Cyborg Superman. He gets to really show his range with the material he’s given and he takes advantage of it. He knocks it out of the park in the scene in which he confronts Miss Martian.

Having Guardian allows to the show to feature more practical stunts which are impressive this episode. Guardian has a lot of solid and fun action scenes that are well choreographed.

I am really happy with the pace of the season and this episode. A lot is accomplished in this episode that I thought would be dragged out more. One of these things is the surprise guest star who was a delight to see.

I don’t like the camera work in this one mainly because the camera refused to sit still. The camera was constantly moving and spinning around; it was distracting and obnoxious. There was some annoying shaky cam too as well as overly stylish editing that tried to make the episode more intense. In my opinion, these stylistic choices kept taking me out of the episode. I like direction with some style but it needs to have a purpose and function. Style for style’s sake is often annoying.

The vigilante murderer that is unintentionally framing Guardian is fairly generic. They try to give him a sob story but it’s pretty basic and doesn’t have any time to develop. It doesn’t help that this exact kind of character was on last week’s Arrow and even looks kind of similar. He’s a dull antagonist with obvious motivations.

This is not Cyborg Superman. I have no problem with changes from the comics; it’s an adaptation. However, Cyborg Superman is called that because he resembles Superman and is a cyborg. If Harewood starts to wear an S on his chest, I will go with it. Until then, he is Cyborg Hank Henshaw. Why does he even call himself Cyborg Superman in the episode? There is nothing Superman about him. I just want him in the outfit and it would be cool.

This episode has an old Gotham problem in which it is three different shows. Gotham has finally managed to make that work in its current season but Supergirl somewhat fails. The three different stories don’t intersect or connect in any way and they just get in the way of the others. The Guardian and Martian Manhunter plots feel like distractions so the other characters don’t figure out that Kara and Mon-El have obviously been kidnapped. The Guardian story especially feels incredibly distant from everything else. Nothing is as developed as it could be because everything is fighting for space.

I feel like the reason Guardian was potentially brought in was to make the show feel more like Arrow. Whether or not that was the reason, it is the result. Almost all of the Guardian’s scenes made me feel like I was watching Arrow. Blake Neely’s music even sounded more like his Arrow work than his Supergirl work. If I wanted to watch Arrow, I would watch Arrow. I like Supergirl because of its tone; the show is fun and makes me happy. I don’t mind darker episodes, such as this one, but I don’t want the show to lose its identity because YouTube commenters think the show is too silly.

Overall, this is an okay episode. Don’t get me wrong; there is some amazing stuff. The fight between Martian Manhunter and Miss Martian is fantastic as I said earlier. The other action is great as well. The episode does manage to move several stories along much faster than I predicted and there are great moments for the show’s overall story. However, the stylistic choices made for the episode annoyed me throughout and I think the episode is a bit too crowded. There are great ideas but they aren’t developed well enough. The Supergirl and Martian Manhunter plots still work fairly well but the Guardian plot really suffers from simply not having the time to explore its ideas. It’s far from a bad episode but I think it could have been a lot better.