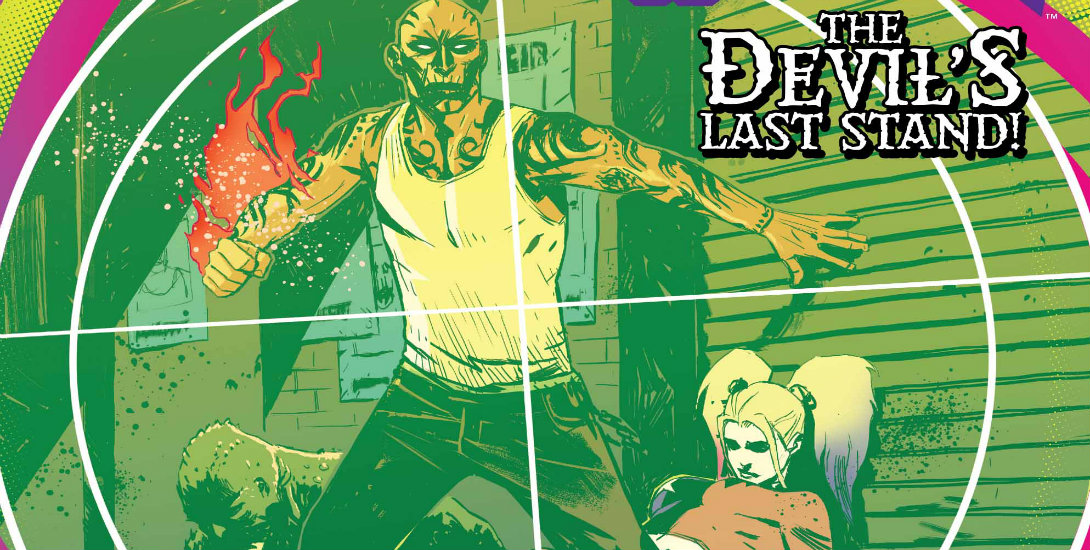 Summary
The El Diablo tale finally comes to an end. After running from Checkmate, his pals with the Suicide Squad and the Mexican version of the Justice League, Justicia, Chato is killed by Deadshot. Really. Two in the heart. He never misses. He is pretty happy to be dead except that the woman of his dreams is most likely going to die too. What is a guy to do? There is only one option. He sells his soul to the Devil, comes back to life and saves her. Duh.

The Amanda Waller half of this book takes place mostly inside the lovely and delightful Ms. Waller’s head. Shockingly, things are not pretty in there. There is a lot of violence, guilt and death. While that happens, the team is up the creek and not only do they not have a paddle, they have an unconscious guy whom Boomerang lovingly refers to as a “heavy bastard.” Good times.

Positives
Honestly, the best part of the El Diablo story is the fact that it is over. OK, and the art. The art is amazing. Richards has so many characters to draw that it must have taken him months and months to do some of the final scenes here. The cool thing is that most of us are not going to be familiar with these characters and so whatever Richards wants us to see, we see. He wants us to see some amazing action and some specific details. His version of Chato as a fire demon with wings…spectacular. I really liked that a lot.

The Waller story is really well paced and gives us a look at the “dark side” of Waller. Huh? She has a light side? I know, right? It turns out that she does. Remember way back in the main title’s first issue where we see a family picture on her desk? Well, turns out, she had a family. Past tense. I am not going to tell you what happened here. It is worth the read for you to find out on your own. Suffice to say, the Waller story steals the book. Well done by writer Vita Ayala.

Negatives
I really wanted to like this story. I stuck it out through all six issues. The El Diablo tale that runs through all six parts of this is simply not very compelling. It could be that I don’t know much about Chato, but I feel like that shouldn’t matter. If the story is good, then I am going to care about anyone. Those 10 page vignettes at the back of the original title are all introductions and the reader does not have to know much about the character to feel pulled in. I just never got comfortable with this and I am kind of glad it is over. I think had the very ending of his tale been different, I would have been swayed, but the fact is, he ends up right back where he started and had he not run in the first place, lives would have been saved and there would have been no need for the international incident. Meh.

Verdict
It was good to see the softer side of Waller and to take a deeper dive into Croc and Boomerang early on in this series. It should have been a stand alone El Diablo book and the other stories should have been told in the back pages of the Suicide Squad.