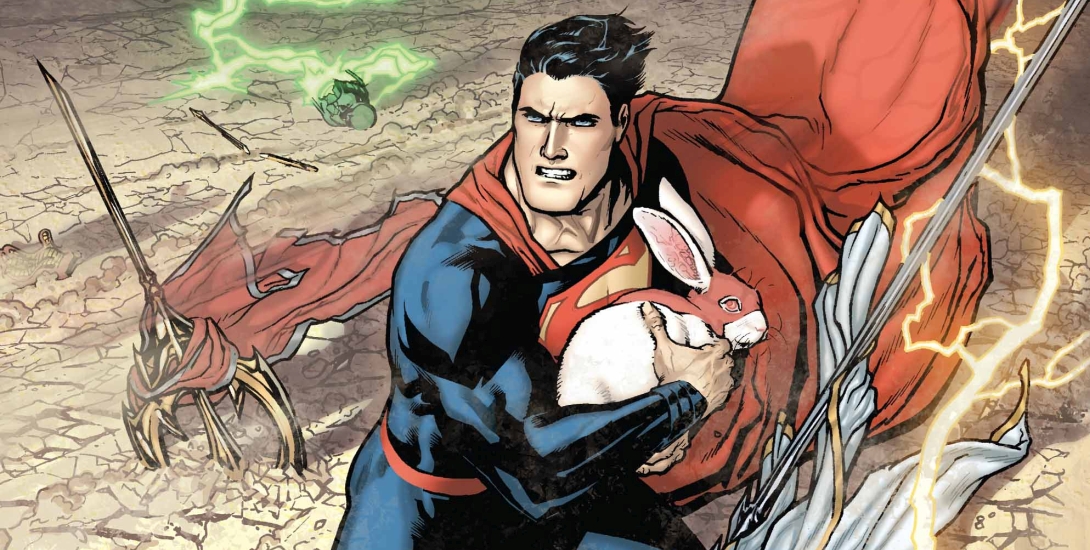 Summary
The second part of the Multiplicity story are begins on Earth 14, where the Justice League of Assassins makes a last stand against an unknown but powerful foe. This being takes out the League, leaving Superman for last, as he is the only member of this league with innate powers. He tells Superman he needs these powers before killing him.

Meanwhile the Justice League Incarnate are at their headquarters, the Orrery of Worlds with Superman, when they receive word of the fall of Earth 14’s Justice League.

Superman suggests that instead of trying to stop the attacks on each world’s Superman as he is attacked, that they should go to as many universes as possible and bring their version of Superman back to the Orrery.

Superman begins by going to Earth 13 and attempting to convince Superdemon to return with him, but ends up having to knock him out and forcibly take him instead.

The JL Incarnate travel to a number of different worlds and bring back each Superman, whether voluntarily or by force.

Superman comes up with a daring plan. With a number of Supermen all in one place, they will act as bait to lure their foe to them. The mysterious enemy arrives, but finds Superman alone. It appears that Clark will keep this enemy distracted, while the JL Incarnate and the other Supermen carry out their part of the plan.

I also love how many of the alternate heroes are used to give us glimpses at different bits of classic DC history. Earth 10 is home to the Freedom Fighters, who resided on Earth X in pre-Crisis history (‘X’ is the Roman Numeral for ’10’). Mary Marvel hails from Earth 5 (Earth S pre-Crisis), home of the Marvel Family. Plus other Earths are based off of various of DC’s Elseworlds titles.

Negatives
I miss Jon (Superboy) and Lois. I know they’ll be back after the Multiplicity story is over, but the family dynamic has been the heart of this title since its Rebirth relaunch. On the other hand, it’s just like old times, seeing Superman off on adventure without the rest of the family. I trust that Superman’s family life will remain an important part of the title, without the whole family necessarily being in every issue.

Verdict
As a fan of multiple Earth stories and as a fan of Superman, this storyline is pushing all the right buttons for me. I can’t wait to see what happens next.