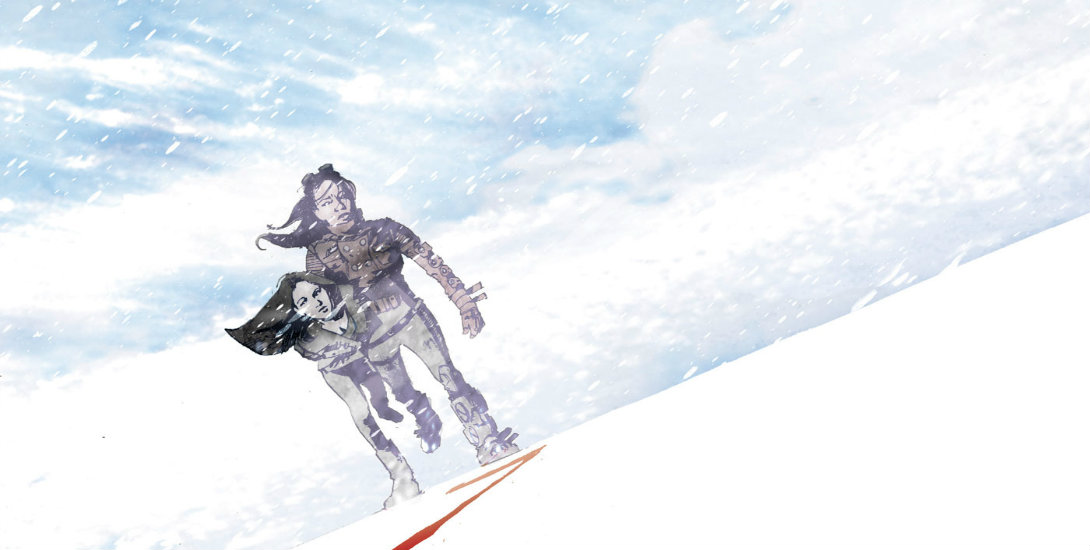 Summary
Fuego, the crazed cowboy with the pet polar bear, has captured Victoria, the only person in the world who can cure Frostbite. Keaton, who killed Victoria’s father, but then felt really, really bad about it, has survived her fall from Fuego’s ship, found a snowmobile and has come back to save Victoria, and hopefully the world. There are some tense moments between Victoria and Keaton. There is a lot of you made me first going on.  Also, Keaton has frostbite and does not really have a good chance to live. Also, she fights a polar bear. She is kind of a badass.

Positives
Where to start? Well, each month, when this book comes out, I wait to read it until the end. Why? Because I know it is going to be great. I find the story compelling, the characters realistic and the setting super awesome in a “my end of the world can kick your end of the world’s ass.” Vertigo comics do not have to worry about continuity. This world is not the world of Neil Gaiman or Alan Moore. This is not the world of Rob Williams or Mitch Gerads. This world gets to exist independently of all of that and Mr. Williamson has created an believable, painful, and interesting world in just five issues. I am so sad to think that this will all be over next month.

Jason Shawn Alexander’s snow filled Hellscape is the stuff of nightmares. There are polar bears on leashes. There are ships blowing across the tundra. The snow is everywhere, in everything. Our view is almost always obscured by snow and that makes this even more dangerous because a psychopath might skin his own pet polar bear and come after you wearing that blood drenched skin. It could totally happen.

You know how when you read a zombie book or see a movie about the end of the world, you think you can figure out how to survive there? Well, Alexander has made that almost impossible to consider. If, and it is a big IF, you can survive the cold, there is a flesh eating disease that is passed through human touch. Did you want to touch other people? Did you? Really?

Negatives
The only issue in this issue is the whole “You made me first” trope. It is a bit old and and overused as far as excuses for bad behavior goes. I would have much rather seen Keaton not apologize, not give a reason and just point the gun at Victoria’s head and say, “Shut up and get on the f-ing sled.” Based on what I’ve seen of Keaton so far, that seems more likely.

Verdict
I love this book and I am sad to see it come to an end next month although I am excited to see how it ends. Does that even make sense? No? I didn’t think so. Listen, this book is great. Vertigo is bringing its A game. Shut up and get on the f-ing sled already.